al-Suffah (الصُّفّة), also known as the Dikkat Ashab Suffah (دكة اصحاب صفة), literally meaning the "platfrom of the people of bench", was a shaded raised platform constructed along the rear/northern wall of al-Masjid al-Nabawi (Muhammad's Mosque), during the Medina period. Suffah was a rectangular raised platform built in either the north-eastern corner or north-western corner of the Prophet's mosque. Another tradition mentions that the Suffah was built along the entire southern wall. Today the original location of the Suffah is part of the Riyad ul-Jannah.

The Arabic word Suffah [see N1] is the root word for English word "Sofa". Although in Arabic the term Suffah can refer to any bench, raised platform, plinth or seating contraption, in Islamic literature it is used more often than not as a proper noun to refer to the historic raised area inside the Prophet's Mosque.

Qadi Iyad bin Musa (lived 1083-1149 CE) notes that "Suffaf" was a shaded area at the rear of the mosque, where poor people stayed, hence they were called the Ashab Suffah (the people or companions of the bench/platform).

According to Hafiz Dhahabi (lived 1274-1348 CE) the "Suffaf" was situated along the northern wall [sic, see N2] of the mosque when the Qibla was towards Haram as-Sharif.

It was initially constructed at the North-East corner, when the Prophet's mosque was first built after Hijrah, and prophet Muhammad ordered it to be covered by palm leaves in order to provide shade, hence it was called al-Suffah or al-Zullah (الظلة); i.e. the shade. When al-Walid ibn Abd al-Malik, the Umayyad Caliph, expanded the mosque, al-Suffah's location was change to where it is either removed altogether or placed elsewhere.

Another narrative by Hafiz Ibn Hajjar relates that the Suffah was a shaded space towards the rear of the Masjid Nabawi. It was constructed for those poor people who neither had any dwellings in Medina nor any relatives of kinsmen. The number of these people (Ashab Suffah) varied over time as people got married, went on travels or passed away. 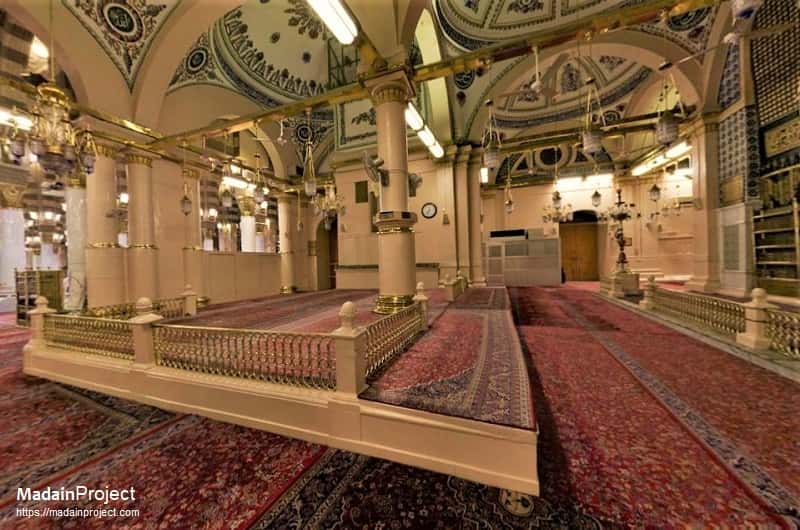 The platform of Suffah is generally confused with the Dikkat al-Aghwat, the platform of the Aghas. The as-Suffah was always located inside the Masjid an-Nabawi during the life of the Prophet Muhammad. Though there's no mention of it in the later (from Umayyad era onwards) being inside the mosque; it was most likely removed during the expansion by the Umayyad Caliph al-Walid and rebuilt outside the main building of the Masjid Nabawi at the site we know today as Dikkat al-Aghwat. Although built in succession of the original Suffah, it was more of a guard post which later on was incorporated inside the mosque. 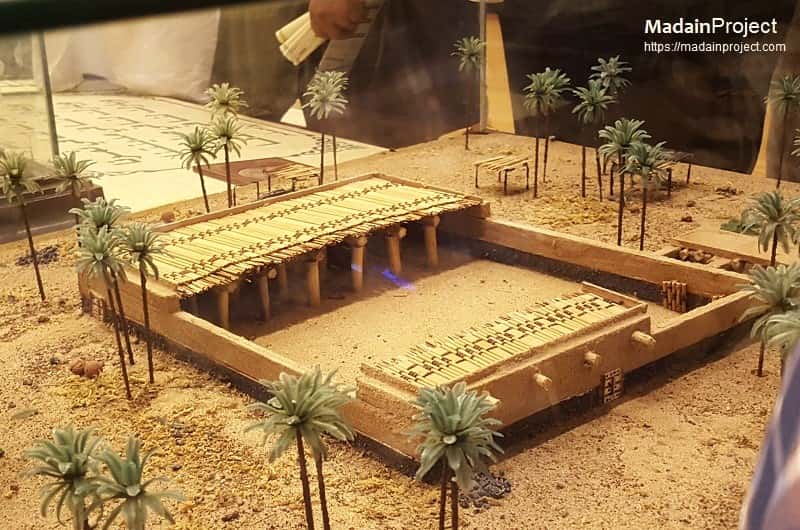 The Ashab Suffah, "companions of the bench", homeless and unmarried Muhajirun (companions of the Prophet who migrated from Mecca) who did not have relatives in Medina, dwelt in al-Suffah where they were mainly learning the Quran and Sunnah. These people were called "As'hab al-Suffah". Prophet Muhammad used to sit with them, chat together, and used to call them to his meal, sharing together his drinks, so they were counted as his dependents. The sahaba (Companions of the Prophet) used to take two or three of the Ashab al-Suffah to feed them at home and used to select the best dates and hang them in al-Suffah's ceiling for meals. During wartime, those who were capable joined the army as well, but this was rare as the Ashab Suffah were the people of little means [see N3].

Samhoudi notes; Fuzalah ibn Ubaid relates that we used to offer Salah in the company of prophet Muhammad and some of these men (Ashab Suffah) use to fell down due to physical weakness and the beduions used to call them demented. When the prophet Muhammad used to hear this he stopped them and said; "if you only knew their status in the heareafter; you will want to become more poor than them".

Some of the notable companions are;