The Saint Catherine's Monastery (دير سانت كاترين) officially "Sacred Monastery of the God-Trodden Mount Sinai" lies on the Sinai Peninsula, at the mouth of a gorge at the foot of Mount Sinai, near the town of Saint Catherine, Egypt. According to tradition, Catherine of Alexandria was a Christian martyr sentenced to death on the breaking wheel. When this failed to kill her, she was beheaded. According to tradition, angels took her remains to Mount Sinai. Around the year 800, monks from the Sinai Monastery found her remains.

Built between 548 and 565, the monastery is one of the oldest working Christian monasteries in the world. The oldest record of monastic life at Sinai comes from the travel journal written in Latin by a woman named Egeria about 381–384. The site is sacred to Christianity, Islam, and Judaism. The living bush on the grounds is purportedly the one seen by Moses.

The Burning Bush
The living or the burning bush on the grounds is purportedly the one seen by Moses. The monastery was built by order of Emperor Justinian I (reigned 527–565), enclosing the Chapel of the Burning Bush (also known as "Saint Helen's Chapel") ordered to be built by Empress Consort Helena, mother of Constantine the Great, at the site where Moses is supposed to have seen the burning bush.

Library
Archives of Library of Saint Catherine's Monastery is the world's oldest continually operating library, possessing many unique books including the Syriac Sinaiticus and, until 1859, the Codex Sinaiticus. The monastery library preserves the second largest collection of early codices and manuscripts in the world, outnumbered only by the Vatican Library. The library is believed to possess a document called the the Ahdname of Muhammad (Ashtiname of Muhammad), also known as the Covenant or Testament (Testamentum) of Muhammad, which is a charter or writ allegedly ratified by the prophet Muhammad granting protection to the followers of Jesus the Nazarene, at the Monastery. 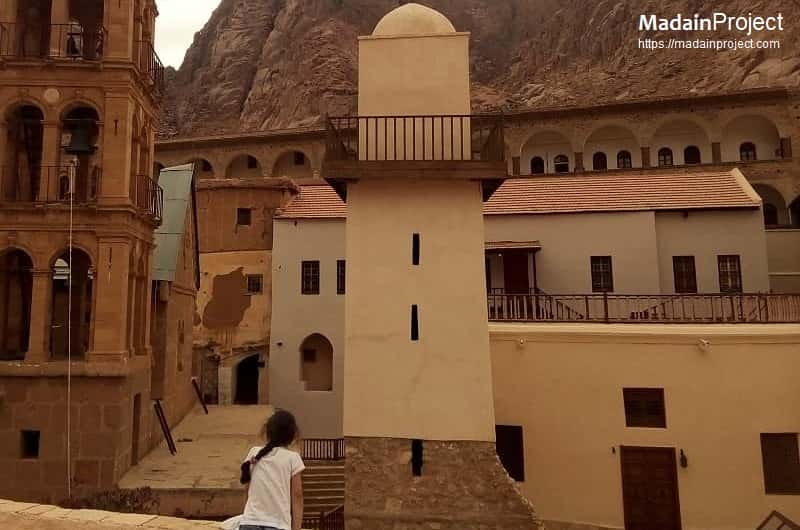 Mosque
A mosque (white structure to the right with minaret) was created by converting an existing chapel during the Fatimid Caliphate (909–1171), which was in regular use until the era of the Mamluk Sultanate in the 13th century and is still in use today on special occasions. During the Ottoman Empire, the mosque was in desolate condition; it was restored in the early 20th century.

Chapel of Saint Tryphon
It is a small chapel called the Chapel of St. Tryphon which serves as an ossuary for the skulls of deceased monastics. Differing from many ossuaries and charnels, St. Catherine’s was based more on functionality than decoration, and the massive pile of remains speaks to that gruesome end. The most important relic in the cathedral is the remains of St. Tryphon, which rest in the chapel, garbbed in black.