Tomb KV6 in Egypt's Valley of the Kings was the final resting place of the 20th-Dynasty Pharaoh Ramesses IX. However, the archaeological evidence and the quality of decoration it contains indicates that the tomb was not finished in time for Ramesses's death but was hastily rushed through to completion

It is located in the central part of the Valley. Its unusually wide entrance stands between, and slightly above, those of two other particularly interesting tombs: KV5 and KV55.

Architecturally the tomb continues the Ramesside style although some of the decoration is not completely traditional. Even though the king reigned for 18 years only the first corridor was completely decorated by the time of the pharaoh’s death and the corridor beyond the pillared hall was hastily enlarged to house the king’s sarcophagus.

KV6 has been open since antiquity, as can be seen by the graffiti left on its walls by Roman and Coptic visitors. While the sarcophagus itself has long since vanished, Ramesses IX's mummy was one of those found in the Deir el-Bahri cache (DB320) in 1881.

Running a total distance of 105 metres into the hillside, the tomb begins with a gate and a shallow descending ramp. Following on from the ramp come three successive stretches of corridor. The first of these has four side chambers – two on each side – but none of these are decorated or finished.

At the end of the corridors come three chambers. The first of these is decorated with the Opening of the mouth ritual, and it is possible that a well shaft would have been dug here had the builders been afforded more time. The second chamber contains four large columns, but neither the cutting nor the decoration work were completed.

At the far end of this chamber, a ramp slopes down to the actual burial chamber, where the pharaoh's sarcophagus was placed (the floor has a rectangular section carved out to accommodate it).

Also known as the Ramesses IX Tomb-plan Ostracon is an Ancient Egyptian ostracon made of pale limestone. It is inscribed with a layout of the tomb of the Pharaoh Ramesses IX in the Valley of the Kings, and dates from the 20th Dynasty (c. 1100 BCE). The ostracon is inscribed on a sherd of approximate dimensions: 0.66 meters long (2/3 meter) by 0.2 meter wide, and was found within his KV6 tomb.

The 'blueprint-like' "tomb-plan" is not a draft plan of the tomb construction, but is a post-construction record. Notes in Hieratic name rooms, with dimensions. The composition of straight lines, (from a straightedge/device) use mostly 90 degree angles, but the design layout also conforms to the linear shape of the sherd, (thus requiring deviations from the 90 degree right angles).

The ceiling (inspect) is vaulted, and is decorated with splendid pictures of the goddess Nut. The side walls show scenes from the Book of Caverns and the Book of the Earth. The far wall of the burial chamber depicts Rameses (inspect) on his barque, surrounded by a host of gods. The yellows, dark blues, and blacks used to decorate this chamber are visually striking and unusual among the tomb decorations in the Valley.

On the outer lintel (inspect) is a depiction of a sundisc with scarab, adored by the king with Isis and Nephthys. The north wall of the first corridor shows the king offering before Re-Horakhty and Osiris, scenes from the ‘Book of the Dead’ and an Iun-Mutef priest before Osiris. The south wall shows the king in a kiosk (inspect), in an unconventional scene offering to a form of Amun-Re-Horakhty with four rams heads and to Meretseger, the goddess of the Western Mountain.

The first division of the ‘Book of Caverns’ is illustrated on this wall. There are four niches off the first corridor which show the king’s names on the jambs and the first one of these on the right may have been cut short because it ran into KV55 next to it. The ceiling is decorated with vultures and the king’s names.

The second corridor depicts scenes from the ‘Litanies of Re’, (depicting the sun in its 75 forms throughout its nightly journey), the ‘Book of the Dead’ and the ‘Book of Caverns’. An astronomical ceiling shows constellations and decans lists.

The outer lintel to the third corridor shows a sundisc containing a ram-headed god and a baboon with the king adoring and followed by 5 goddesses on either side. The south wall has scenes from the ‘Amduat’ with representations of Underworld deities and some hieratic graffiti. On the opposite wall are scenes of the king offering to Ma’at, Ptah and the king as Osiris, with more hieratic graffiti. The astronomical ceiling shows pictures of divine barques and processions of gods in yellow on a dark blue background.

The vestibule or well-room illustrates Iun-Mutef priests officiating in the ritual of the ‘Opening of the Mouth’ with a ram-standard on the left of the doorway and an ibis-standard in the right. There is a winged disc and the king’s names on the outer lintel of the four-pillared hall, but it was otherwise left undecorated.

The tomb extends beyond the pillared hall with a corridor which was turned into the burial chamber at the king’s death. In the entrance to the burial chamber, on the soffit, a disc depicts a ram-headed god adored by four baboons. On the inside of the doorway is a goddess with standards on the right and a mummiform Geb on the left. The south and north walls depict scenes from the ‘Book of Caverns’, ‘Book of the Earth’ and the ‘Amduat’. The ceiling is similar to that in the burial chamber of Rameses VI, showing Nut swallowing the sun in a double scene of the ‘Book of the Night’. The divine barque is pulled by jackals. 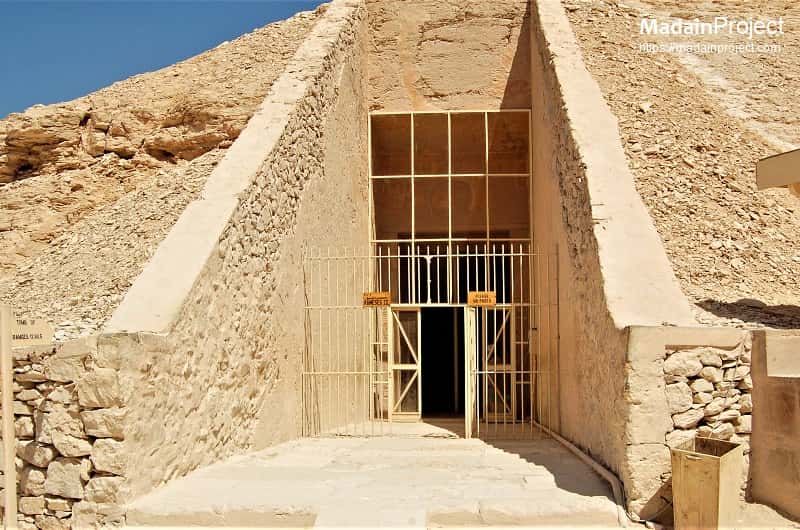