Cave of the Seven Sleepers (Jordan)

The Cave of Ashab Kahf (اصحاب الکهف‎) or the Cave of the Seven Sleepers (كهف السبعة النائمين) in Jordan is a partly natural and partly man-made burial cave dating back to the Byzantine era, believed to be the cave of Ashab Kahf mentioned in the Quran. The cave is also known as the Kahf of Raqeem (كهف الرقيم) mentioned in Quran's chapter 18 (Sura al-Kahaf). The location of the cave of the Ashab al-Kahf has been an issue of much conflict amongst the Ulama (Muslim scholars and historians) and researchers. Where is the cave situated in which Ashab al-Kahf slept for over 300 years? Other purported locations include Tarsus (Ephesus), Turpan Caves,

The entrance to the entombed ruined Cave is rather small; and interestingly points south towards Mecca and the Qibla. The facade is somewhat adorned and is of typical Byzantine style with entrance flanked by two pillars and niches (inspect); one on each side. On the walls, outside the Cave, are engravings and carvings which are unique to the region; weathered, engraved decorative frontage and sculpted pillars frame the doorway. 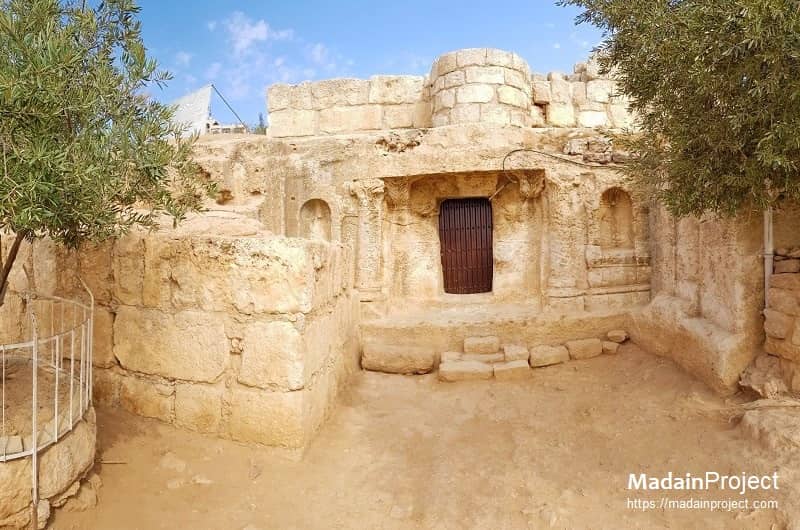 "The Seven Sleepers of Ephesus Discovered by Alexander the Great", Folio from a Falnama (Book of Omens) or The seven sleepers of Ephesus, Folio from a Dispersed Nuzhatnama, 1550 CE. In Christian and Muslim tradition, the Seven Sleepers (اصحاب الکهف), aṣḥāb al kahf, the 'People of the Cave' is the story of a group of youths who hid inside a cave outside the city of Ephesus around 250 CE to escape a religious persecution and emerged some 300 years later. The earliest version of this story comes from the Syrian bishop Jacob of Serugh (circa 450 – 521), which is itself derived from an earlier Greek source, now lost. The story appears in the Qur'an (Surah Al-Kahf 9–26) and thus is important to Islam. The Islamic version includes mention of a dog, who accompanied the youths into the cave and appears to keep watch. In Islam, these youths are referred to as the People of the Cave.

Interior
The cave is divided into three sections, one section stretches straight from the entrance in a northward direction, a second section branches off towards the east on the right hand side, and a third section branches off towards the west on the left hand side. In the eastern and western sections are eight constructed graves resembling coffins.

Eastern Section and Crypt
The grave on the northern flank (left) of the eastern section has a small hole. If one peers (look inside) into the right hole, human remains can be clearly seen. This is a hollow cavity that contains human remains. The tomb to the right bears an octagon, maybe a remenant of the Christian church.

Ventilation Tunnel
In the eastern section of the cave is a small tunnel ascending upwards (see from outside) which resembles a chimney that expels smoke. This tunnel enters and leaves through the roof of the cave. Usama Ibn Munqidh, one of Salahuddin Ayyubi's courtiers, writes in his Kitab al-I’tibar, “I, together with 30 horsemen, entered this cave and performed prayers here, but there was a narrow tunnel that we did not enter.”

Lower Mosque
Lower Mosque, looking west with mehrab and stone-minbar to the left, was probably installed either during Umayyad or Abbasid periods.

Upper Mosque
The Upper Mosque; the remains of an ancient mosque together with its niche can be clearly noticed, elevated several feet above the cave. At one time a small church was built on top of the cave; this was converted to a mosque with the mihrab still being visible above the entrance. This mosque is 10 metres in length and 10 metres in width. Four pillars were discovered fashioned in the mode of the Roman era and several copper coins were also discovered from the era of the Roman emperor Justin (517-527 CE).

A number of artefacts were found during excavations, including coins belonging to the Roman era, Islamic era, Ottoman era, together with a clay bowl, a pearl necklace, a copper comb, and rings. All of these things have now been gathered and placed on a display now maintained within the northern wall of the cave. Several clay jugs were also discovered nearby which were probably used to perform ablution.