The triple Barque Shrines of Seti II, built on his command in the 13th century BCE, served as a way station for the sacred barques of the Theban triad of the gods Amon, Mut and Khonsu. The exterior walls of the shrine depict reliefs showing Seti 2 making offerings to different deities. The Triple Bark Shrine of Seti II at Karnak provides us with the only known reference for his son and heir, Prince Seti-Merenptah.

Built out of quartzite and sandstone blocks, the triple Barque Chapel of Seti II, sometimes referred to as the repository of Seti II was known in ancient times as "Castle of Seti Merneptah in the Temple of Amun". Its facade, reaching some 7.1 meters above the surrounding pavement, is marked by sloping walls that are capped by the standard torus (a large convex molding, semicircular in cross section) and cornice. The central doorway measures 4.5 meters high, while the side doorways are each 3.79 meters.

The central chamber of the Bark Shrine of Seti II was dedicated to Amun. The dimensions of the door (inspect) of the central shrine, where the image of the god Amun-Re would have rested, was large enough to allow a mid-sized bark to enter. On the southern wings of the eastern and western walls of Amun’s chapel are matching scenes in which Seti II offers to the god’s bark. It appears that the shrine underwent three distinct stages in its decoration. 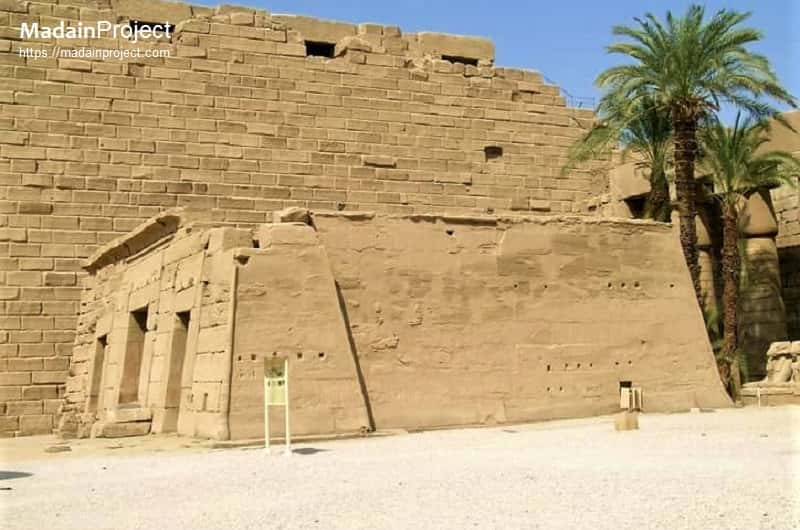 The triple bark shrines would have housed the barks of Mut (west shrine), Amun (central shrine) and Khonsu (east shrine) during the various processions out of the temple made by the statues of the gods. Sety II's stone triple shrine for the barks of Amun-Re, Mut and Khonsu was located outside Karnak’s western entrance of the time. The foundation, the first course of stone, and the doorway are all made of quartzite that probably came from Gebel el-Ahmar near Cario. The rest of the building is made of more ordinary sandstone, probably from Gebel el-Silsila.

It has three deep chambers for the barques of Mut (left), Amun (center) and Khonsu (right). These chambers have no common entryways. The sanctuary consecrated to Mut has two niches in the back and on its wall is a depiction of the barque of of that god. The central chamber has three niches in its rear wall, and likewise contains representations of the barque of Amun.

Peering into the left most chamber dedicated to Mut. The shrine is called "a place of honoring and praying to all the gods," and it may have served as a place where the average Egyptians could gather within the temple complex and pray. The blocks composing the northeast corner and west wall of the shrine were left undressed (inspect). At the time of its construction, Seti II’s bark shrine was the westernmost building at Karnak Temple’s western entrance.

Rear wall of the Barque Shrines bearing inscriptions. Although the Triple Bark Shrine was largely complete before Seti II’s death, except for reliefs on the silicious sandstone doorways of its façade, it may have been a project of the last part of the king’s reign after he had regained control of the Thebaid when the stability of his line was surely foremost in the pharaoh’s consciousness.