This is the largest of the precincts of the temple complex, and is dedicated to Amun-Re, the chief deity of the Theban Triad. Located near Luxor, Egypt, is one of the four main temple enclosures that make up the immense Karnak Temple Complex.

APA
Precinct of Amun-Re (n.d.). Retrieved on January 20, 2022, from https://madainproject.com/precinct_of_amun_re

The site occupies some 250,000 square meters and contains many structures and monuments. The main temple itself, the Temple of Amun, covers some 61 acres.

Historically, the earliest artifact found in the area of the temple is a small, eight-sided column from the Eleventh Dynasty, which mentions Amun-Re. The ancient name for Karnak, Ipet-Isut (usually translated as 'most select of places') only really refers to the central core structures of the Precinct of Amun-Re, and was in use as early as the 11th Dynasty, again implying the presence of some form of temple before the Middle Kingdom expansion.

Pylons
There are ten pylons built during the long history of the temple complex by several Pharaohs. first pylon, the facade of the Amun-Re precinct with avenue of the sphinxes leading up to the entrance. Construction of the current pylon began in 30th dynasty, but was never totally completed. There are large numbers of mud bricks piled up against the inside of the 113m wide and 15m thick pylon. It was built by Nectanebo I (380-362 BCE) who also built the huge enclosure wall surrounding Karnak and some scholars believe that an earlier pylon may have stood on this same spot.

Quay Barge Landing
The main temple was entered via this quay now dry and several hundred metres from the Nile. In the middle of the wharf the ramp built by Taharqa.

Kiosk of Taharqa
In order to construct this kiosk, the ram-sphinx corridor was removed and the statues moved to the edges of the open court. Only one column remains in place, bearing inscriptions by Taharqa, Psamtik II and Ptolemy IV Philopator. The remains of this huge kiosk, built by 25th Dynasty pharaoh Taharqa (690-664 BCE) originally consisted of ten twenty-one meter high papyrus columns linked by a low screening wall. Today there is only one great column still standing.

Temple of Ramesses III
The Temple of Rameses III is located on the south side of the forecourt, the inscriptions inside the temple show the king slaughtering captives, whilst Amun-Re looks on. The shrine’s entrance was fronted by a small pylon adorned with scenes of the king smiting his enemies and two six meter statues carved from red sandstone flanked the door way. Inside, the first court is lined with Osride statues of the king; the west side wear the red crown of the south, while those on the east side wear the white crown of the north.

Bubastite Portal
The Bubastite Portal is located between the temple of Ramesses III and the second pylon. It records the conquests and military campaigns in c. 925 BCE of Shoshenq I (identified with the biblical Shishaq), of the Twenty-second Dynasty. This gate was erected by the kings of the Twenty-second Dynasty of Egypt, also known as the "Bubastite Dynasty". It is located to the south-east side of the Temple of Ramesses III. 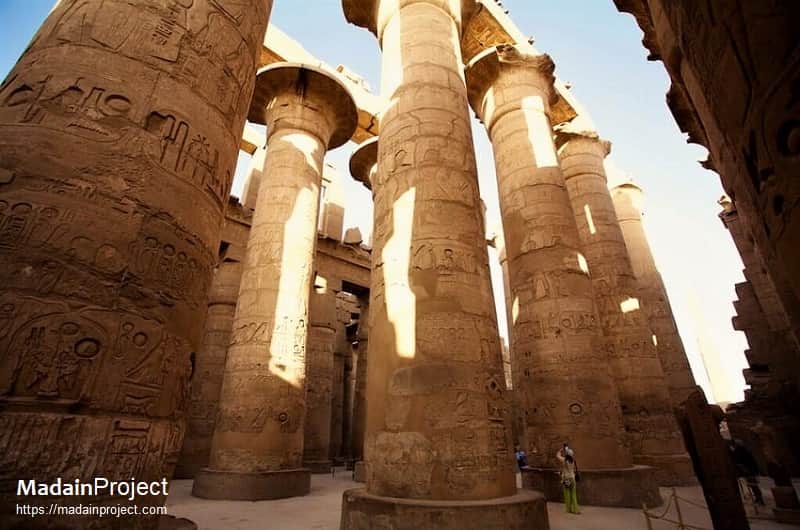 Great Hypostyle Hall
The Great hypostyle hall was begun by Seti I, and completed by Ramesses II. The outer walls depict scenes of battle, Seti I on the north and Ramesses II on the south. Adjoining the southern wall of Ramesses II is another wall that contains the text of the peace treaty he signed with the Hittites. The hall covers an area of 50,000 sq ft (5,000 sq meters) and filled with 134 gigantic stone columns with 12 larger columns standing 80 feet (24 m) high lining the central aisle.

First Court
Also known as the cachette court, over 900 statues were discovered in 1903 by Georges Legrain buried under this open court. These had been buried there, probably in the Ptolemaic period, during one of the clearances of the complex for rebuilding or construction.

Sacred Lake
The Sacred Lake, was where priests purified themselves before performing rituals in the temple. The sound and light show is now viewed from a seating area next to the lake. Karnak Temple Sacred Lake is the largest of its kind and was dug by Tuthmosis III (1473-1458 BCE). It measures 393 feet (120m) by 252 feet (77m) and is lined with stone wall and has stairways descending into the water. It was surrounded by storerooms and living quarters for the priests. There was also an aviary for aquatic birds.

Karnak Open Air Museum
The Karnak Open Air Museum, located in southwest is an open-air assembling area containing reconstructed barque-shrines and millions of stone fragments, from small to huge, laid out in long rows, awaiting reassembly into their respective monuments.

Akhmenu Temple
Also known as the Festival Hall of Thutmose III (Akhmenu Temple), located at the heart of the Precinct of Amun-Re, in the Karnak Temple Complex. The edifice is normally translated as "the most glorious of monuments". The Festival Hall of Thutmose III is situated at the end of the Middle Kingdom court, with its axis at right-angles to the main east–west axis of the temple. It was originally built to celebrate the jubilee (Heb-Sed) of the 18th dynasty Pharaoh, Thutmose III, and later became used as part of the annual Opet Festival.

Ptah Temple
Temple of Ptah lies to the north of the main Amun temple, just within the boundary wall. The building was erected by the Pharaoh Thutmose III on the site of an earlier Middle Kingdom temple. This temple is dedicated to the ancient Egyptian god Ptah, his wife Sekhmet the goddess of war, and his son Nefertum.