The Abu Simbel temples are two massive rock temples at Abu Simbel (Arabic: أبو سمبل‎), a village in Nubia, southern Egypt, near the border with Sudan. They are situated on the western bank of Lake Nasser, about 230 km (140 miles) southwest of Aswan (about 300 km (190 miles) by road). The complex is part of the UNESCO World Heritage Site known as the "Nubian Monuments", which run from Abu Simbel downriver to Philae (near Aswan).

The twin temples were originally carved out of the mountainside in the 13th century BCE, during the 19th dynasty reign of the Pharaoh Ramesses II. They serve as a lasting monument to the king and his queen Nefertari, and commemorate his victory at the Battle of Kadesh.

During his reign, Ramesses II embarked on an extensive building program throughout Egypt and Nubia, which Egypt controlled. Construction of the temple complex started in approximately 1264 BCE and lasted for about 20 years, until 1244 BCE. It was known as the "Temple of Ramesses, beloved by Amun". 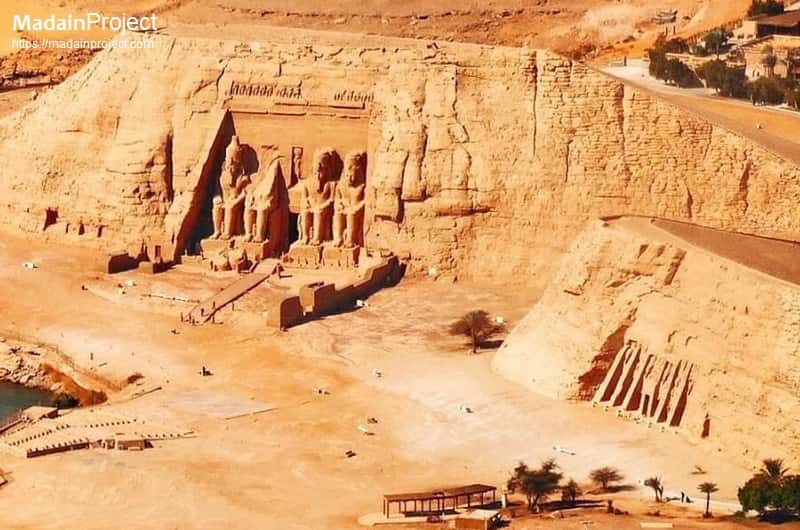 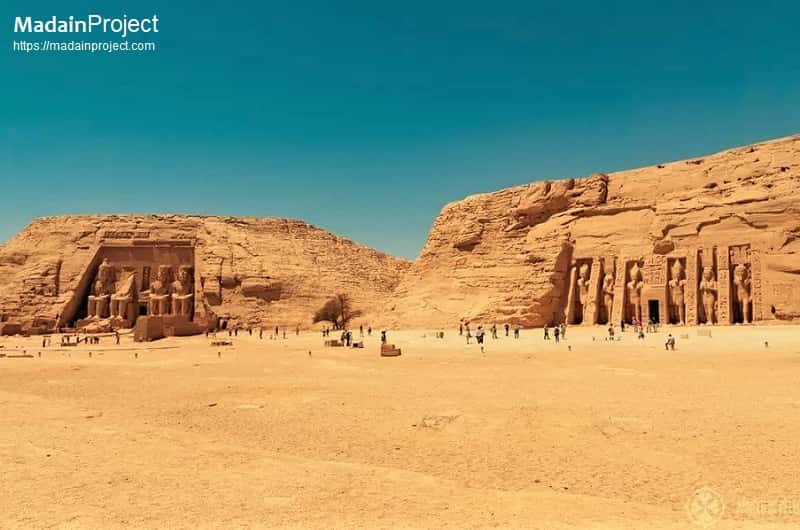 The complex consists of two temples. The larger one is dedicated to Ra-Harakhty, Ptah and Amun, Egypt's three state deities of the time, and features four large statues of Ramesses II in the facade. The smaller temple is dedicated to the goddess Hathor, personified by Nefertari, Ramesses's most beloved of his many wives. The temple complex is now open to the public. 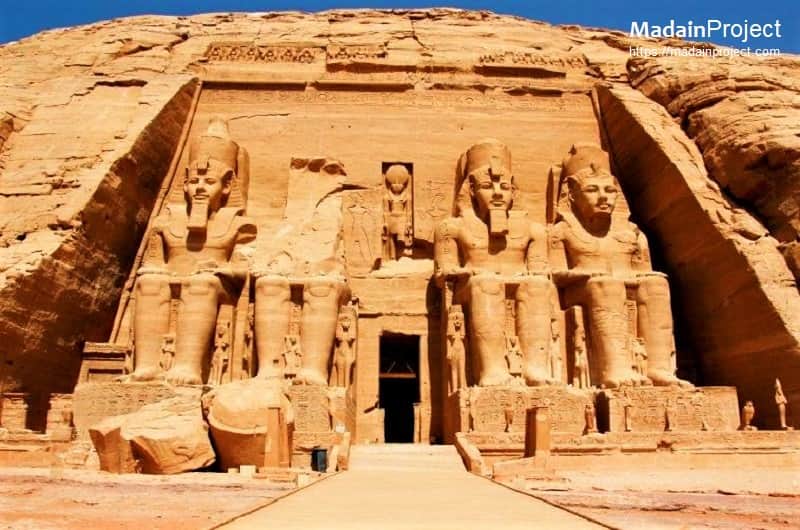 Great Temple of Ramesses
The Great Temple at Abu Simbel, carved out of the mountain on the west bank of the Nile between 1274 and 1244 BCE, this imposing main temple of the Abu Simbel complex was as much dedicated to the deified Ramses II himself as to Ra-Horakhty, Amun and Ptah. The four colossal statues of the pharaoh, which front the temple, are like gigantic sentinels watching over the incoming traffic from the south, undoubtedly designed as a warning of the strength of the pharaoh. 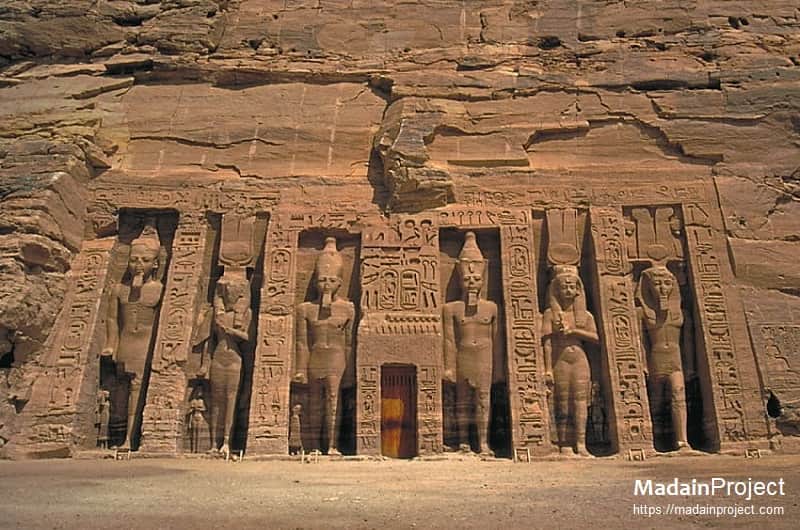 Lesser Temple of Nefertari
The Small Temple at Abu Simbel or the Temple of Hathor at Abu Simbel was built by Ramesses II (c.1279-1213 BCE) to honor both Hathor as the goddess of love/music and his wife Nefertari as a deified queen. The facade, resembling a pylon, has six standing colossal (over 33 feet/10 meters high) statues. On each side of the entrance, two statues of Ramesses flank one of Nefertari dressed as Hathor. The colossal statues are, in turn, flanked by smaller statues of their children. 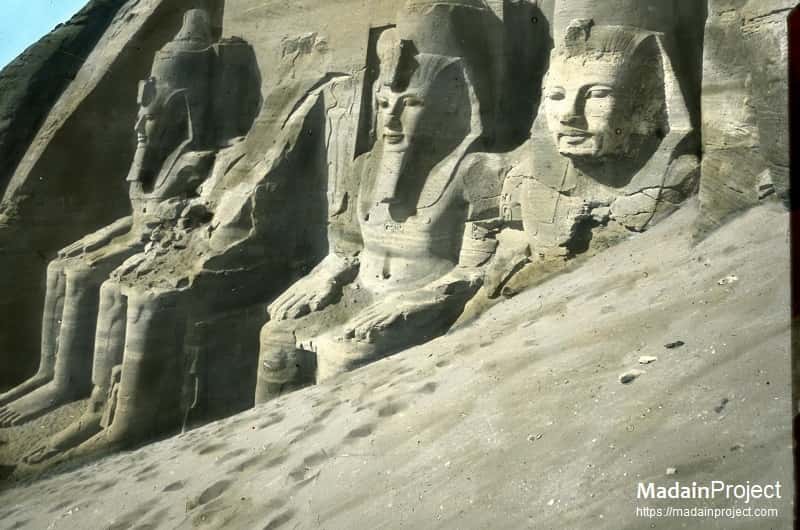 With the passage of time, the temples fell into disuse and eventually became covered by sand. By the 6th century BC, the sand already covered the statues of the main temple up to their knees. The temples were forgotten until 1813, when Swiss orientalist Jean-Louis Burckhardt found the top frieze of the main temple. A detailed early description of the temples, together with contemporaneous line drawings, can be found in Edward William Lane's Description of Egypt (1825–1828 CE).

Carved out of a sandstone cliff on the west bank of the Nile, south of Korosko (modern Kuruskū), the temples were unknown to the outside world until their rediscovery in 1813 by the Swiss researcher Johann Ludwig Burckhardt. They were first explored in 1817 by the early Egyptologist Giovanni Battista Belzoni. 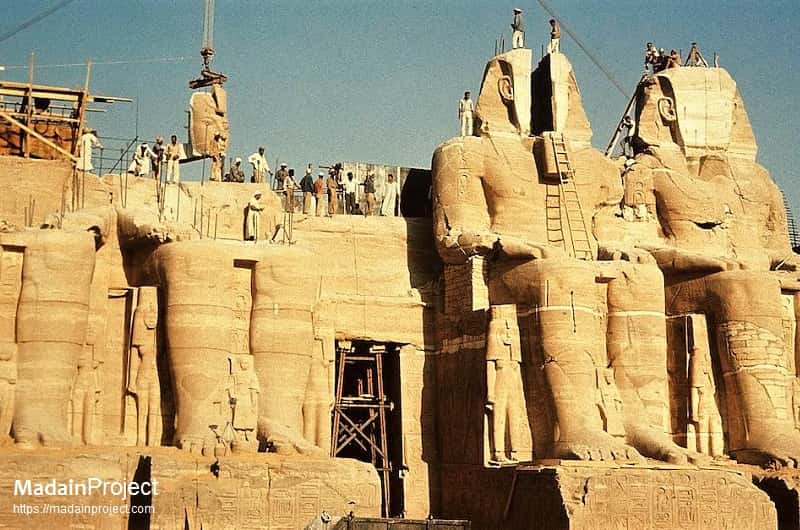 The entire complex was relocated in its entirety in 1968, on an artificial hill made from a domed structure, high above the Aswan High Dam reservoir. The relocation of the temples was necessary or they would have been submerged during the creation of Lake Nasser, the massive artificial water reservoir formed after the building of the Aswan High Dam on the River Nile. Between 1964 and 1968, the entire site was carefully cut into large blocks (up to 30 tons, averaging 20 tons), dismantled, lifted and reassembled in a new location 65 metres higher and 200 metres back from the river, in one of the greatest challenges of archaeological engineering in history. 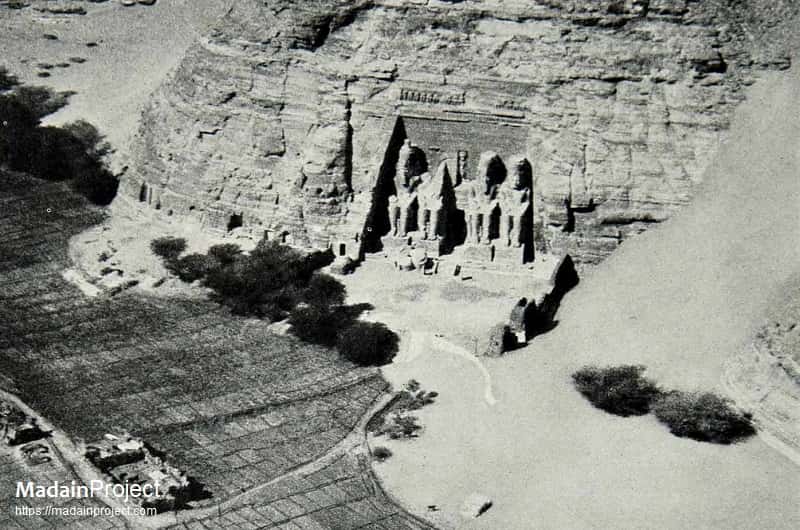