Identified in 4th century CE, this is the traditionally accepted location of the first tomb of Lazarus of Bethany, known as al-'Azaar (اﻠﻌزار) in Islamic tradition. Since the 16th century, the site of the tomb has been occupied by the al-Uzair Mosque built by Ottomans. Built in 1952-55 the Church of Saint Lazarus stands at the site of several much older churches. 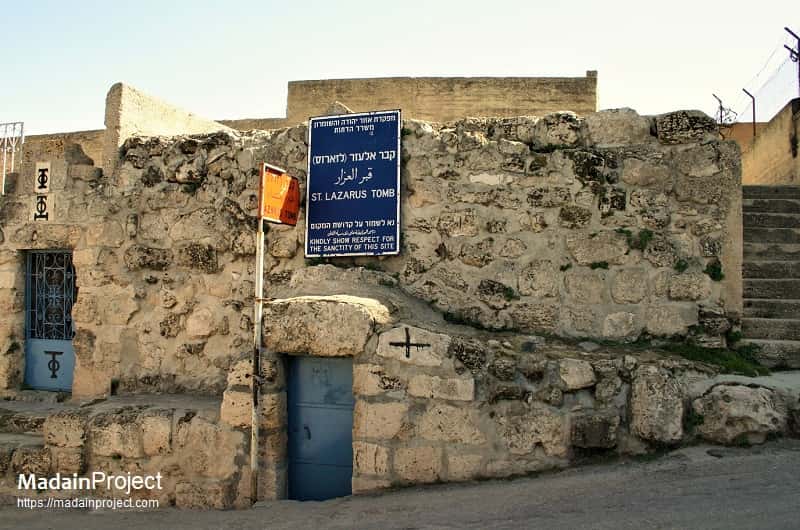 The tomb is the purported site of a miracle recorded in the Gospel of John in which Jesus raised Lazarus from the dead. The site, sacred to both Christians and Muslims, has been identified as the tomb of the gospel account since at least the 4th century CE. Archeologists have established that the area was used as a cemetery in the 1st century CE, with tombs of this period found "a short distance north of the church".

Burial Chamber
Inside the burial chamber of the tomb, notice the absence of the burial berth or niche in the wall (where the body was laid to rest), this burial berth was a characteristic elemement of first century jewish tombs. The Crusaders strengthened the tomb crypt itself with masonry, which obscures most of the original rock surface (except for a few holes). The alignment of the tomb and antechamber suggests they predate the Byzantine churches and may very well be from the time of Jesus.

According to one theory the small chamber contains at least three funerary niches (arcosolia), now mostly hidden by the Crusader masonry. One tradition places the tomb of Lazarus to the right of the entrance, which was formerly closed by a horizontal stone. Tradition also says that Jesus was standing in this antechamber when he called Lazarus from the grave.

Several Christian churches have existed at the site over the centuries. Since the 16th century, the site of the tomb has been occupied by the al-Uzair Mosque. The adjacent Roman Catholic Church of Saint Lazarus, built between 1952 and 1955 under the auspices of the Franciscan Order, stands upon the site of several much older ones. In 1965, a Greek Orthodox church was built just west of the tomb.

By 1384, a simple mosque, named after saint Lazarus, had been built on the site of the existing structures. In the 16th century, the Ottomans built the larger al-Uzair Mosque to serve the town's (now Muslim) inhabitants and named it in honor of the town's patron saint, Lazarus of Bethany. The construction utilized the surviving barrel vaulting of the former west church. Its courtyard is in the Byzantine church atrium.