The Yibna Bridge is a Mamluk arch bridge near Yibna, which crosses the river Nahal Sorek (formerly known as Nahr Rubin, or Wadi al-Tahuna). Two major roads crossed the Sorek stream (Arabic: "Nahr Rubin") near Yavne: a northwestern road to the port city of Yafo (Joppa), and a northeastern road via Aphek (Antipatris) to Syria and Mesopotamia. The latter road was the main coastal road, and in order to support the traffic through this important road, a bridge was constructed over the stream during the beginning of the Mamluke period (end of the 13th C). 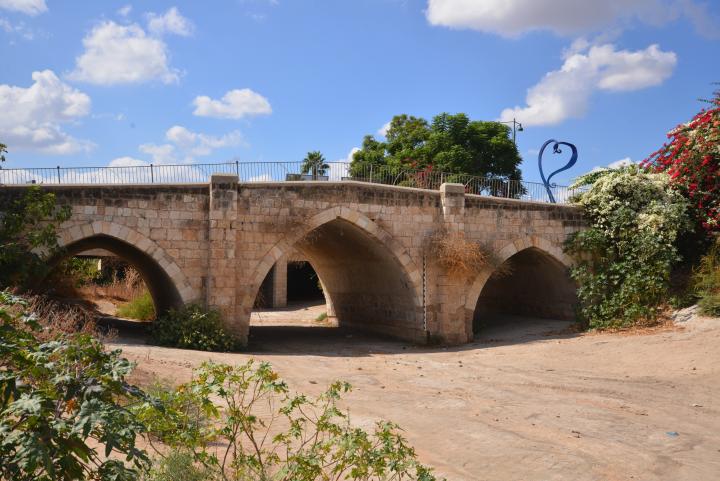 The bridge was one in a series of bridges built by Sultan Baybars in Egypt and Palestine. It was first studied in modern times by Clermont-Ganneau, who noted that an Arabic chronicle had referred to the construction by Baybars in 672 Hj. of two bridges build of a significant nature "in the neighbourhood of Ramleh". The chief purpose of these bridges was to ease communication for his armies between Egypt and northern Syria.

The downstream-facing side of the bridge. The bridge is 48 metres (157 ft) long, and 11.5 metres (38 ft) wide.[6] It comprises three arches, two central piers with triangular upstream-facing cutwaters and downstream-facing buttresses with sloping cills. It is very similar in design to the more well-known Jisr Jindas, apart from the width of the piers. The bridge does not contain any decoration or inscriptions, similar to that found on Jisr Jindas. However, according to Andrew Petersen there is "a possible inscription or signature" on a stone at the south end.