Tomb KV9 in Egypt's Valley of the Kings was originally constructed by Pharaoh Ramesses V. He was interred here, but his uncle, Ramesses VI, later reused the tomb as his own. The tomb is located in Wadi Biban el-Muluk , and is known since antiquity. Romans knew the tomb as the tomb of Memnon and the savants of the Napoleonic Expedition as "La Tomb de la Metempsychose". With some of the broadest corridors, longest shafts (117m) and greatest variety of decoration, KV 9 is one of the most spectacular tombs in the valley.

Following the tomb’s ransacking a mere 20 years after burial, the mummies of both Ramses V and Ramses VI were moved to Amenhotep II’s tomb where they were found in 1898 and taken to Cairo.

The tomb of Ramesses VI seems to have been robbed shortly after his burial. Reports which date at the latest from Ramesses IX's reign report the interrogation of five robbers who took four days to break into the tomb.

The layout is typical of the 20th Dynasty – the Ramesside period – and is much simpler than that of Ramesses III's tomb (KV11). In the Graeco-Roman period, the tomb was identified as that of Memnon, the mythological king of the Ethiopians who fought in the Trojan War. As a result, it was frequently visited; 995 graffiti left by visitors have been found on the temple walls, ranging from the 1st century CE to the 4th century CE. 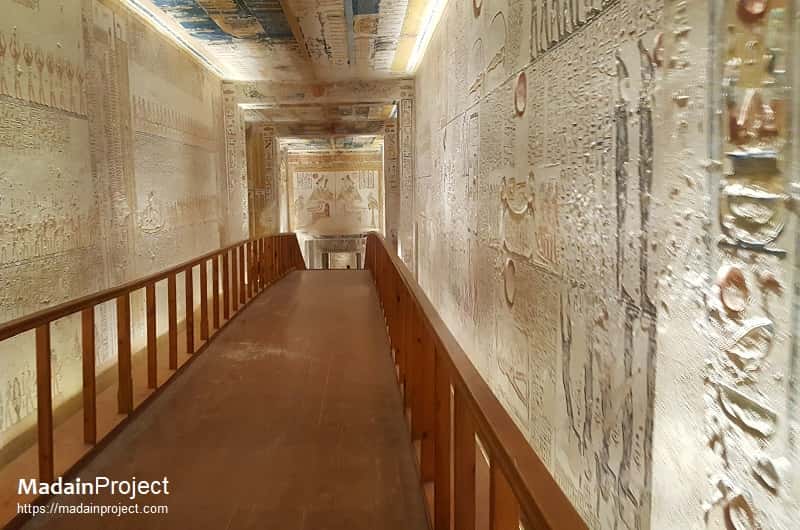 The walls of the chamber are filled with fine images of Ramses VI with various deities, as well as scenes from the Book of the Earth, showing the sun god’s progress through the night, the gods who help him and the forces of darkness trying to stop him reaching the dawn.

Outer Sarcophagus of Ramesses VI
Fragments of a large granite sarcophagus were discovered when Georges Émile Jules Daressy cleared the tomb in 1898 CE. The sarcophagus was restored in 2004 following two years of work on over 250 fragments recovered in the tomb, where it is now on display.