House of the Virgin Mary

The House of the Virgin Mary Meryemana Evi or Meryem Ana Evi, "Mother Mary's House") is a Catholic and Muslim shrine located on Mt. Koressos (Bülbüldağı, "Mount Nightingale") in the vicinity of Ephesus, 7 kilometres (4.3 mi) from Selçuk in Turkey.

The house was discovered in the 19th century by following the descriptions in the reported visions of Blessed Anne Catherine Emmerich (1774–1824), a Roman Catholic nun and visionary, which were published as a book by Clemens Brentano after her death. The shrine itself is not extensively large, but may rather be described as a modest chapel. The preserved stones and construction date back into the Apostolic Age, as consistent with other preserved buildings from that time, but with minor additions such as garden landscapes and devotional additions outside the shrine.

Upon entrance to the chapel, a pilgrim is met by one single large room where an altar along with a large statue of the Blessed Virgin Mary (inspect) is prominently displayed in the center. While the bottom half of the house is the original building, the top half was restored with an effort to maintain as much of the original appearance as possible.

The house of Virgin Mary is a typical Roman architectural example, entirely made of stones. In the 4th century CE, a church, combining her house and grave, has been built. The original two-stored house, which consisted of an anteroom (where today candles are proposed), bedroom and praying room (Christian church area) and a room with fireplace (chapel for Muslims). Today, only the central part and a room on the right of the altar are open to visitors. From there one can understand that this building looks more like a church than a house. 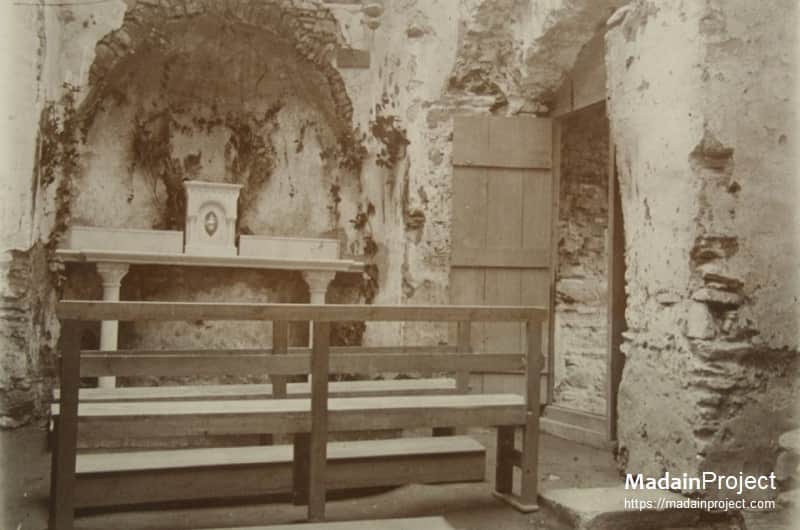 On Wednesday, July 29, 1891, a group of priests led by Fr. Henri Jung set out on foot, using Emmerich’s writings like a surveyor’s map, compass in hand. The “monastery” – a stone hut, when found, was clearly an ancient ruin. The ruins are known to locals as "Panaghia-Capouli, The Door of the Holiest". The discovery revived and strengthened a Christian tradition dating from the 12th century, 'the tradition of Ephesus', which has competed with the older 'Jerusalem tradition' about the place of the Blessed Virgin's dormition.

Emmerich said that as a child she had visions in which she talked with Jesus, saw the souls in Purgatory, and witnessed the core of the Holy Trinity in the form of three concentric, interpenetrating full spheres. Emmerich had ever been to Ephesus, and indeed the city had not yet been excavated; but visions contained in The Life of The Blessed Virgin Mary were used during the discovery of the House of the Virgin Mary, the Blessed Virgin's supposed home before her Assumption, located on a hill near Ephesus, as described in the book Mary's House.

On the way to the shrine, visitors pass a key hole-shaped baptismal pool, larger than the one located at the basilica in Ephesus. It is thought that an early community of Christians may have lived or were baptized here in seclusion in order to escape the nearby Romans.

On the right side, a smaller room lies----traditionally associated with the actual room where the Virgin Mary is believed to have slept. Marian tradition holds that some form of running water used to flow like a canal in the smaller room where the Virgin Mary slept and rested, leading to the present drinking fountain outside the building structure. The humble appearance of plain stone bricks and a small size makes it seem insignificant.

Outside the shrine is a particular "wishing wall" which pilgrims have used by tying their personal intentions on paper or fabric. Various types of florals and fruits are grown nearby, and additional lighting has been installed within the vicinity of the shrine for further monitoring of the site. A water fountain or well is also located nearby, believed by some pilgrims to have miraculous powers of healing or fertility.

Three popes have visited Mary’s House: Blessed Pope Paul VI in 1967, Saint John Paul II in 1979, and Pope (Emeritus) Benedict XVI in 2006, each of whom celebrated Mass there. Due to the actions of Pope Leo XIII in 1896 and Pope John XXIII in 1961, the Catholic Church first removed plenary indulgences from the Church of the Dormition in Jerusalem and then bestowed them for all time to pilgrims to Mary's House in Ephesus.

Another interesting place is the "Water of Mary", a spring to be found at the exit of the church area and where a rather salt water, with supposed curative properties, can be drunk by all.

House of Joseph and Mary, a hillside Jewish house dating back to the early first century CE in northern Israel/Palestine may have been the Nazareth home where Jesus was raised. The stone and mortar house, first identified in the 1880s, is likely to have been the home in which Mary and Joseph brought up their son, claims Dr. Ken Dark, a British 1st century and Christian archaeology specialist, who has been researching the ruins since 2006