The archaeological site located below the Convent of Sisters of Nazareth, Shefa 'Amr (دير راهبات الناصره - شفاعمرو), contains the remains of a first century Jewish dwelling and burial caves. Locally known as the house of Joseph, the remains include stone-walls, entrances, pottery shards, containers, and other artefact. The Convent of the Sisters of Nazareth is adjacent to the Basilica of Annunciation.

According to a seventh-century pilgrim, this Byzantine-era church was believed to have been built over the house of Mary and Joseph, where the young Jesus was nurtured. Rebuilt by the Crusaders, it was finally destroyed by fire, probably in the 13th century.

The Sisters of Nazareth convent was established by a group of French nuns who arrived in 1881. Archaeological evidence was discovered by chance while they were building their house.

The (possible) courtyard, known as the 'Structure I' is the earliest feature on the site securely dated to the first century CE. The excavations by Ken Dark revealed a first-century “courtyard house” that was partially hewn from naturally occurring rock and partially constructed with rock-built walls. Many of the home’s original features are still intact, including doors and windows. Also found at the site were tombs, a cistern and, later, a Byzantine church.

Second Temple Period Dwelling
Remains of the dwelling are located on the south side of the complex, partially cut into the hillside rock. The site was subsequently used in the Roman period for burial, suggesting settlement contraction or settlement shift. In 2006, the Sisters granted the Nazareth Archaeological Project full access to the site, including Fr. Senès drawings and notes, which they had carefully stored.

Eastern Stairway
Eastern stairway in the courtyard section, to the east of the courtyard. It was most likely built during the crusader period. It is one of the two stairways situated in the second temple period remains, on the southern side of the complex. It is possible that, although certainly rebuilt in the Crusader period, this wall may have been based on an Early Roman period wall, belonging to the house on the west side. 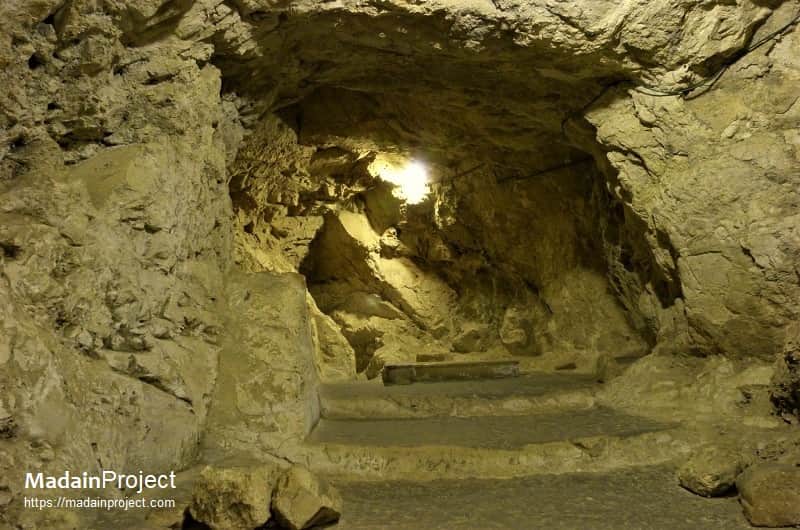 Byzantine Small Chapel
This rock hewn small chapel is located in the southern part of the first level (Byzantine level). Archaeologists led by Ken Dark, a professor at the University of Reading in the United Kingdom, and other archaeologists surveyed the site, and by combining their findings, a new analysis of Fr. Senès’ findings, notes from the Sisters’ earlier excavations and other information, reconstructed the development of the site from the first century to the present.

Byzantine "Church of Nutrition"
The remains of the Byzantine era "Church of Nutrition" (peek inside), according to De Locis Sanctis was built over the house where it was believed that Jesus had lived in Nazareth as a child. the archaeological site at the Sisters of Nazareth convent in central Nazareth has remained unpublished and largely unknown to scholarship. However, work by the Nazareth Archaeological Project in 2006–10 showed that this site offers a full and important stratified sequence from ancient Nazareth, including well-preserved Early Roman-period and later features.

The access stairway coming down from the ground level of the Sisters of Nazareth Convent to the Byzantine era level which houses the 4th-5th century 'Church of the Nutrition' described in the seventh-century pilgrim account De Locis Sanctis. The scale of the church and its surrounding structures suggests that Nazareth was a much larger, and more important, centre for Byzantine-period pilgrimage than previously supposed.