The Elephantine or the Elephantine Island (جزيرة الفنتين), is an island on the Nile, with a large number of ancient Egyptian archaeological sites, forming part of the city of Aswan in Upper Egypt. Elephantine is 1,200 metres (3,900 ft) from north to south, and is 400 metres (1,300 ft) across at its widest point. The island is located just downstream of the First Cataract, at the southern border of Upper Egypt with Lower Nubia.

The island may have received its name after its shape, which in aerial views is similar to that of an elephant tusk, or from the rounded rocks along the banks resembling elephants.

Elephantine was the dwelling place of Khnum, the ram-headed god of the cataracts, who guarded and controlled the waters of the Nile from caves beneath the island. He was worshipped here as part of a late triad of Egyptian deities. This "Elephantine Triad" included Satis and Anuket. 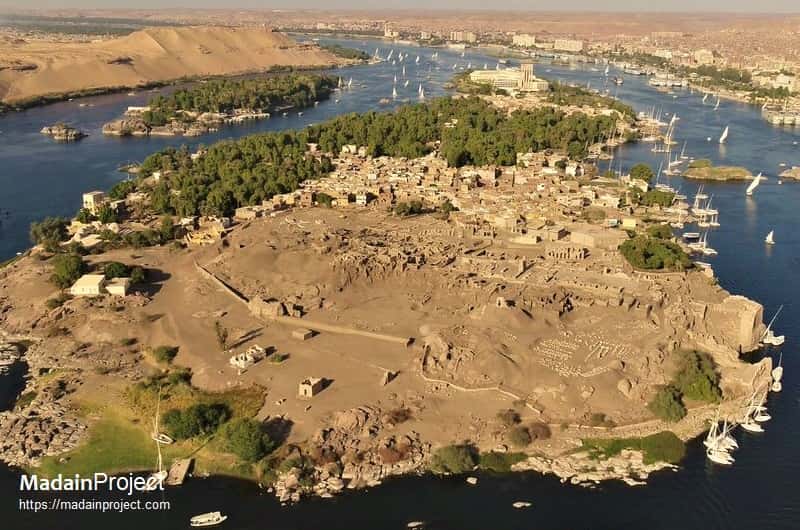 Middle Kingdom Temple of Satet
The Temple of Satet was totally renovated by the Theban king Intef III, towards the end of the First Intermediate period, in the early Eleventh Dynasty. The central chapel was left at its original place between the three natural boulders. The hall which stood in front of the chapel was paved and decorated with limestone slabs for the first time.

Barque Shrine of Senusret I

New Kingdom Temple of Satet
During the New Kingdom period, the temple of Satet was built anew under queen Hatshepsut (1507–1458 BCE) in the early 18th Dynasty and further enlarged by her successor, Thutmose III. The sanctuary of the new temple was placed directly over the sanctuary of the older periods. Evidently the New Kingdom temple kept the old tradition of the sanctuary's place. There are indications for further construction work during the 26th Dynasty (664–525 BCE), but very little of that temple has survived.

Ptolemaic Sanctuary of Kalabsha
This Ptolemaic era sanctuary was dismantled and the masonry was used in later reconstruction of the Kalabsha Temple. In 1963 when the Kalabsha Temple was dismantled for the relocation, remains of this sanctuary were discovered and transported to its new location on Elephantine island, and subsequently rebuilt. In 1974-5 the blocks with reliefs were reconstituted in to a new structure, some new stone was used and left roughly dressed to distinguish it from the old, while the base structure needed to hold the recovered decorated stones was constructed in sandstock brickwork of similar colour and texture but clearly different from the recovered stones

Khnum Temple
The temple at Elephantine was dedicated to Khnum, his consort Satis, and their daughter, Anuket. The temple dates back to at least the Middle Kingdom.

A large square granite gateway is one of the few surviving structures. During the past few excavation seasons the German-Swiss Mission to Elephantine, directed by C von Pilgrim, has been investigating the area around the New Kingdom remains of the Temple of Khnum. They have recently uncovered more of the plan of the temple – yielding details of the location of pylons, columned court and forecourt as well as a possible festival hall of Amenhotep II.