Church of the Nativity

The Church of the Nativity, or Basilica of the Nativity, is a Church-complex located in the city of Bethlehem in the West Bank. The grotto it contains holds a prominent religious significance to Christians of various denominations as the birthplace of Jesus. The grotto is the oldest site continuously used as a place of worship in Christianity, and the basilica is the oldest major church in the Holy Land.

The first Church of the Nativity was built in the fourth century by Roman Emperor Constantine and his mother Helene.

The church was originally commissioned by Constantine the Great a short time after his mother Helena's visit to Jerusalem and Bethlehem in 325–326, on the site that was traditionally considered to be the birthplace of Jesus. That original basilica was likely built between 330–333, being already mentioned in 333, and was dedicated on 31 May 339.

The core of the entire complex connected to the Grotto consists of the Church of the Nativity itself, and the adjoining Roman Catholic Church of St. Catherine north of it and few other minor religious and administrative structures. 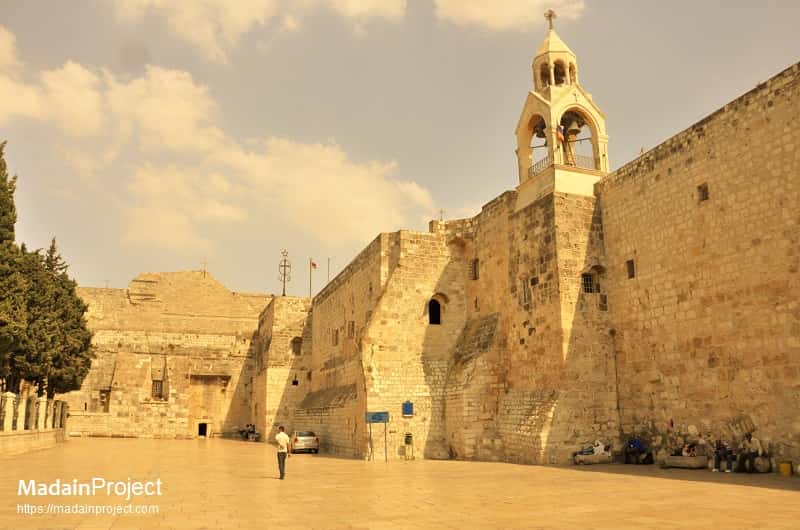 Byzantine Basilica
The current basilica was rebuilt in its present form in the 6th century CE by the Byzantine Emperor Justinian I (527–565 CE), after the destruction of either 529 or 556 CE. It is designed like a typical Roman basilica, with five aisles formed by Corinthian columns, and an apse in the eastern end containing the sanctuary. The basilica is entered through a very low door called the "Door of Humility" (inspect).

Grotto of the Nativity
The Grotto of the Nativity is a cave which enshrines the site where Jesus is said to have been born. The cave has an eastern niche said to be the place where Jesus was born, which contains the Altar of Nativity. It constitutes the centrepiece of the Nativity Church complex. It is situated underneath its main altar, and it is normally accessed by two staircases on either side of the chancel. The grotto is part of a network of caves, which are accessed from the adjacent Church St Catherine's. The tunnel-like corridor connecting the Grotto to the other caves is normally locked. The exact spot where Jesus was born is marked beneath this altar by a 14-pointed silver star (inspect) with the Latin inscription; Hic De Virgine Maria Jesus Christus Natus Est-1717 ("Here Jesus Christ was born to the Virgin Mary"-1717).

Nave and Columns
There are 44 columns separating the aisles from each other and from the nave, some of which are painted with images of saints (inspect), such as the Irish monk Catald (fl. 7th century CE), the patron of the Sicilian Normans, Canute IV (c. 1042–1086 CE), king of Denmark, and Olaf II (995–1030 CE), king of Norway.

Gilded Mosaics
The church's interior walls feature medieval golden mosaics once covering the side walls, which are now in large parts lost. Out of original 2000 square meters, today only 125 square meters of ancient mosaics remain. During 2017/18 these mosaics were extensively cleaned and restored. These mosaics are made of gold leaf placed between two glass plates, only the faces and limbs are drawn with small pieces of stone.

"The Call of David" Sculpture
The sculpture represents the visit of the prophet Samuel to Jesse (seated and surrounded by seven of his sons). On the other side of the relief we see David, the youngest son, arriving with his flock. The sculpture is topped with an angelic figure descending upon the gathering. The tree symbolizes the geneology of Jesus, who is represented as the King of the Universe and is at the highest place in the scultupre. His holiness pope Benedict XVI, during his visit to Bethlehem blessed this work of ark on the 13th of May 2009 CE.

Franciscan Church of Saint Catherine
The Church of St. Catherine is a Roman Catholic church dedicated to Catherine of Alexandria. It has been further modernized according to the liturgical trends which followed Vatican II. The church in its current shape is the result of work from the 19th century, during the Ottoman era. It is built in Neo-Gothic style. It was extended in 1881 CE with funds provided by Emperor Franz Joseph I of Austria-Hungary. The medieval chapel was built at the alleged site of Jesus' apparition to St Catherine, where he announced her of her coming martyrdom.