The Temple of Barran (معبد بران‎) is a Sabaean temple near Ma'rib, Yemen; also known as "Throne of Bilqis" (عرش بلقيس). The Arash Bilqis, which dates back to the 10th century BCE, harbors evidence that Queen Bilqis once actually lived. Despite being thousands of years old, the main part of the building is still standing and continues to shed light on the deep history of Yemen.

What is known today as the Bilquis Throne, is mentioned in ancient Sabaean inscriptions at Barran Temple the home of the Goddess Almaqa' (Moon), the inscriptions also mention Dhat Hameem (Sun) and Athter (Blossom). Located some 600 meters west of the Awam Temple, it is associated with the Queen Bilqis, Queen of Sheba, mentioned in Bible and Quran. Although researchers disagree about the homeland of Malikat Bilqis, while claiming that she was Egyptian, Ethiopian, or even Syrian, strong evidence suggests her presence in Yemen where archeologists found statues of women in the Barran Temple.

Marib is mentioned in holy books as the capital of the kingdom of Saba, the birthplace of a 3,000-year-old civilization that left behind significant ancient ruins. The most famous of these is the throne of Queen Bilquis. 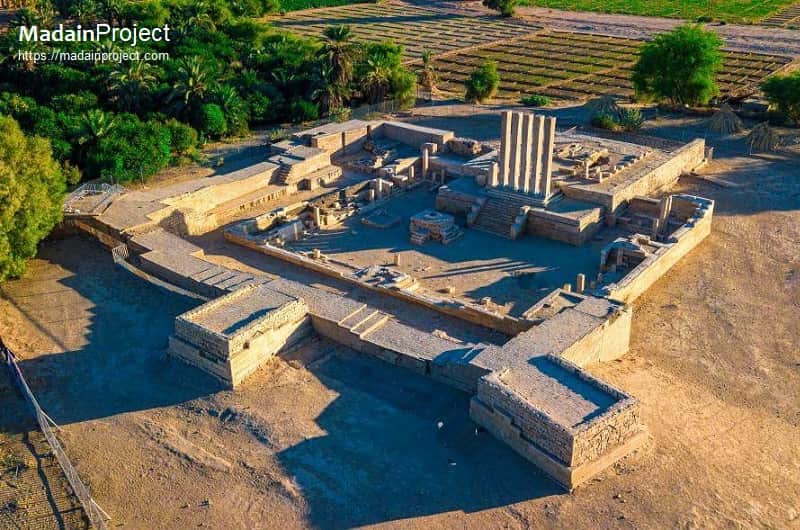 The temple (illustration), located in the city of Marib, 170 km east of Sana’a, partly excavated by Wendell Phillips' expedition of 1951–1952 CE.

Temple of Awwam
The nearby Awam Temple, also dedicated to the Moon god almaqah. Located some 600 meters east of the Bar'an Temple, it is one of the most famous monument of the ancient Kingdom of Saba dating back to the first millennium BCE Marib, Yemen. Virtually all modern scholars agree that Sheba was the South Arabian kingdom of Saba, centered around the oasis of Marib, in present-day Yemen. Though, the queen's existence is disputed among historians.

Tradition of Solomon and Sheba
In the original story, Bilqis (biblical Sheba), after whom the temple bears its fame, brings a caravan of valuable gifts for King Solomon. This tale has undergone extensive Jewish, Islamic, and Ethiopian elaborations, and has become the subject of one of the most widespread and fertile cycles of legends in the Orient. 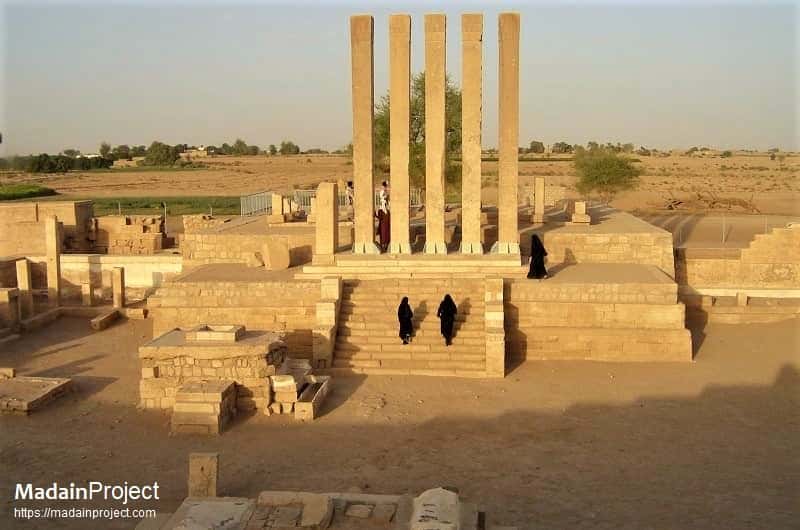 Plan
The temple is divided into several architectural units, including the ‘courtyard’ along with its annexes, and the great brick fence and its extensions.

Behind the six columns there is a broad platform, which historians believe was the main location for the throne of Queen Bilquis. The temple has a unique harmony where in the majestic main entrance and the courtyard unite together to face off against a steep staircase with a magnificent display of architectural virtuosity that hints at the greatness of its builders.

Wall Inscriptions
An extensive archive of events experienced by the Sabaean state since the first millennium BCE was inscribed on the walls, which made researchers realize that the temple was also a documentation center for the Sabean state. According to some researchers, the walls of the temple were covered by bronze plates that contained writings and diverse motifs. However, these writings were removed and only the bronze nails on the walls remain. Inside the temple, one can find the gifts of visitors that were given to God such as statues and censers. 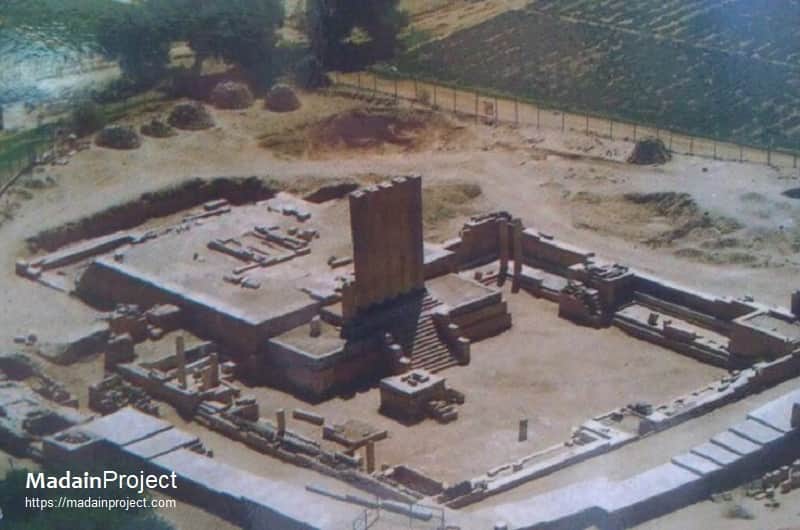 1988 Excavaions
Located on the western side of the Safer – Marib road, the Barran Temple was renowned for its five magnificent columns which are more than twelve meters high. In the years 1988, new archaeological excavations revealed remains of an equally impressive sixth column hidden under the sand. The main features of the structure are the six columns and the sacred well in the middle of the courtyard.

2000-2007 Excavaions
In 2000, the German Institute of Archaeology began a huge renovation project on the temple that was completed in 2007. Professor of History and Civilization at Sana’a University, Abdullah Abu al-Ghaith, said that the temple is considered to be the largest temple in Yemen before Islam, and it was a temple for worshipping the moon, the main god of the Sabaeans. "Despite the temple being looted many times since the 4th century CE after Yemenis embraced monotheistic religion, its discoveries confirm the huge size of the temple, and it should be 8th place among the Seven Wonders of the World," he said.

The results of the German expedition show that the Temple went through two historical stages, the first stage extending from the 2nd Millennium BCE to the beginning of the 1st Millennium BCE, and the second stage starting from 850 BCE to the end of the Sabean dynasty. 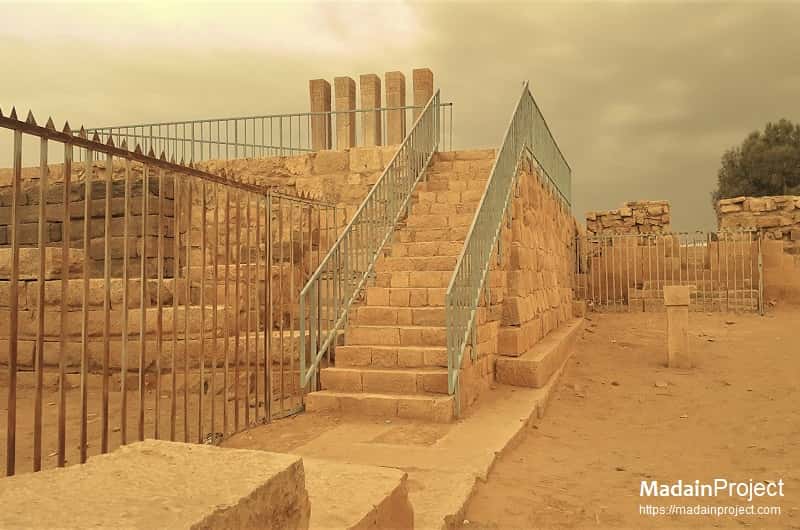 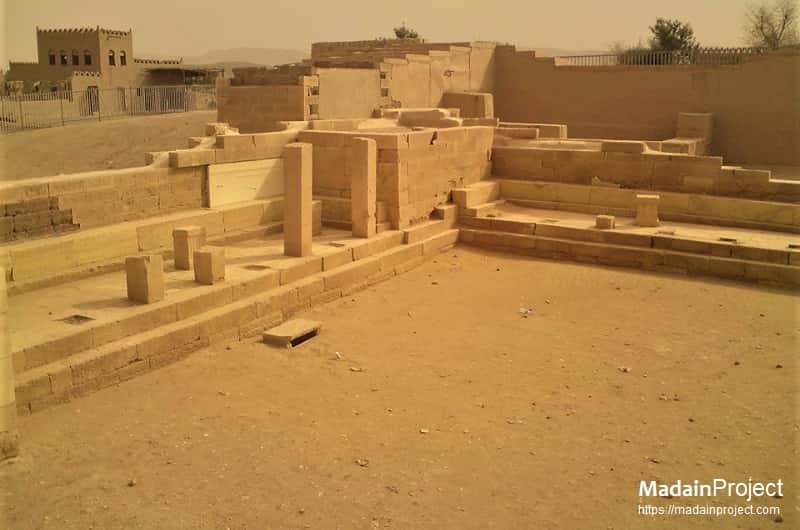