Established in the 14th century, monastery is a church on the site where, according to the Armenian tradition, stood the house of the high priest Caiaphas. At the times of Jesus the area of Mount Zion was part of the new walls of the "upper" city. Although there is no evidence that the site was indeed the house of the high priest, the archaeological excavations held in 1971 in this area did find buildings from that period, including a cellar with fresco paintings.

The entrance to the Armenian convent and church is located near the Zion gate. According to Armenian tradition, this site on Mount Zion is the location of the house of Caiaphas, the high priest of the Jews at the time of Jesus. At this house Jesus was arrested, then delivered to the trial which led to his crucifixion. The convent is located on Mount Zion, outside of the old city walls and 50M west to Zion gate, along the external wall.

View looking southeast at the not–yet–completed Armenian Church of the Holy Savior. Archaeological excavations have taken place in this area which some associate with the House of the High Priest Caiaphas—before whom Jesus appeared on the night before his crucifixion (Matt 26:57–75, etc.). The present Armenian convent is only from the 14th century, however a Byzantine Christian (6th Century) church had existed on the same site.

The base of the church’s tower (left), access to the central courtyard with tombs of prominent figures of the Armenian patriarchate and the Dormition Abbey to the right.

Interior and the alter of the 1920s church inside the Armenian Convent compound. Although there are no evidence to prove that the site was indeed the house of Caiaphas, archaeological excavations conducted in 1971 CE have recovered artifacts from the time of Jesus from the area. The Armenians also claim to identify the house of Annas, the Father in law of Caiaphas, who is also said to have questioned Jesus.

The cloister (court yard) of the church of the house of Caiaphas. On the left side is an altar, and on other sides are grand tomb stones of the Armenian Patriarchs in the Armenian civil cemetery. The church courtyard, surrounded by an arcade, has served as a burial ground for the Armenian Patriarchs of Jerusalem since the 18th century. The bishops, guardians of the holy sites and second in rank to the patriarchs, are buried under the paving in the center of the courtyard. 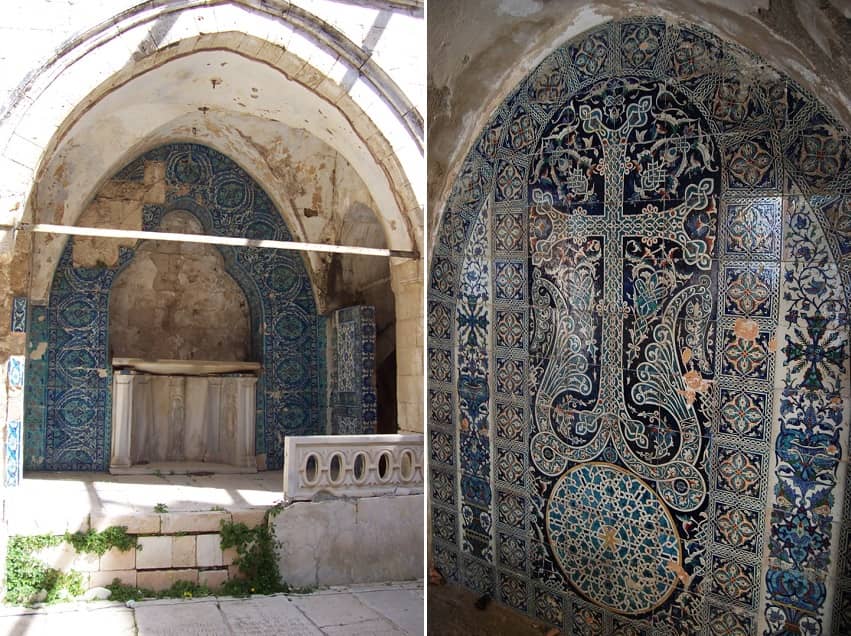 The altar (left), located in the eastern wall, in the alcove closest to the church, was decorated in 1928 by the founder of Jerusalem’s Armenian ceramics tradition – David Ohanessian. Another panel (right) close to the altar, which has not been confirmed as Ohanessian’s work, covers the entire wall and features an Armenian cross in its center. The blue tiles, decorated with a black pattern, create a unified surface on which the giant cross appears, surrounded by a white frame over the background, as a singular image and a sign of revelation.

In the floor of the Church courtyard are the tombs of the Armenian Patriarchs, church’s treasury incharge and second in rank to the patriarchs, and the leaders of the Armenian church of Jerusalem. In charge of the holy sites and the church’s treasures, these men had great power when they were alive. Now, in death, the stones set on their graves serve as pavement for pilgrims and visitors to step on, a testimony to the bishops’ humility.