The Temple of Kom Ombo is an unusual ancient double temple in the town of Kom Ombo in Aswan Governorate, Upper Egypt. It was constructed during the Ptolemaic dynasty, 180–47 BCE. Some additions to it were later made during the Roman period.

The building is unique because its 'double' design meant that there were courts, halls, sanctuaries and rooms duplicated for two sets of gods. The southern half of the temple was dedicated to the crocodile god Sobek, god of fertility and creator of the world with Hathor and Khonsu.

Meanwhile, the northern part of the temple was dedicated to the falcon god Haroeris ("Horus the Elder"), along "with Tasenetnofret (the Good Sister, a special form of Hathor or Tefnet/Tefnut) and Panebtawy (Lord of the Two Lands)." The temple is atypical because everything is perfectly symmetrical along the main axis.

Much of the temple has been destroyed by the Nile, earthquakes, and later builders who used its stones for other projects. Some of the reliefs inside were defaced by Copts, who once used the temple as a church. All the temples buildings in the southern part of the plateau were cleared of debris and restored by Jacques de Morgan in 1893.

The texts and reliefs in the temple refer to cultic liturgies which were similar to those from that time period. The temple itself had a specific theology. The characters invoked the gods of Kom Ombo and their legend. Two themes were present in this temple: the universalist theme and the local theme. The two combine to form the theology of this temple.

A temple was already built in the New Kingdom to honor these gods, however, this site gained in importance during the Ptolemaic Kingdom. Little remains of the New Kingdom temple. The existing temple was begun by Ptolemy VI Philometor (180–145 BCE) at the beginning of his reign and added to by other Ptolemies, most notably Ptolemy XIII Theos Philopator (51–47 BCE), who built the inner and outer hypostyles. The scene on the inner face of the rear wall of the temple is of particular interest, and "probably represents a set of surgical instruments." 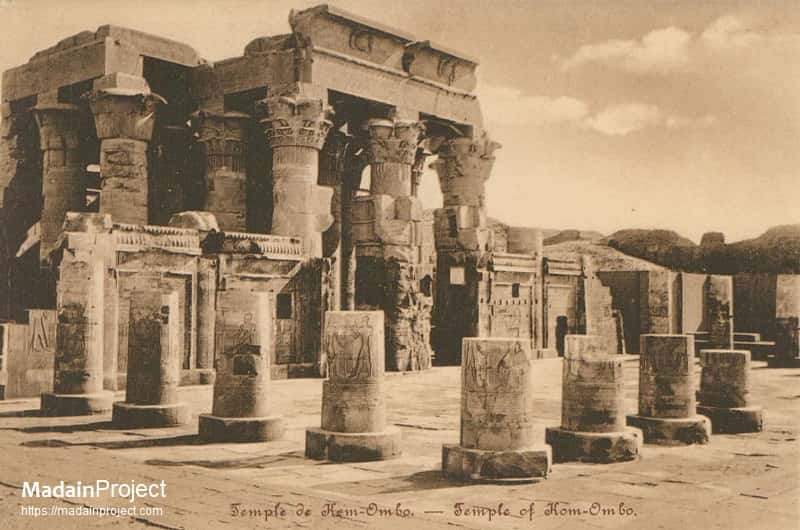