Lahore Fort Complex is located at an eminence in the northwest corner of the Walled City. The citadel complex is spread over approximately 50 acres and is trapezoidal in form. Although the origin of this fort goes deep into antiquity, the present fortifications were begun by Mughal Emperor Jalaluddin Muhammad Akbar. Notable structures include Lahore Fort, Badshahi Mosque, surrounding structures and grounds. 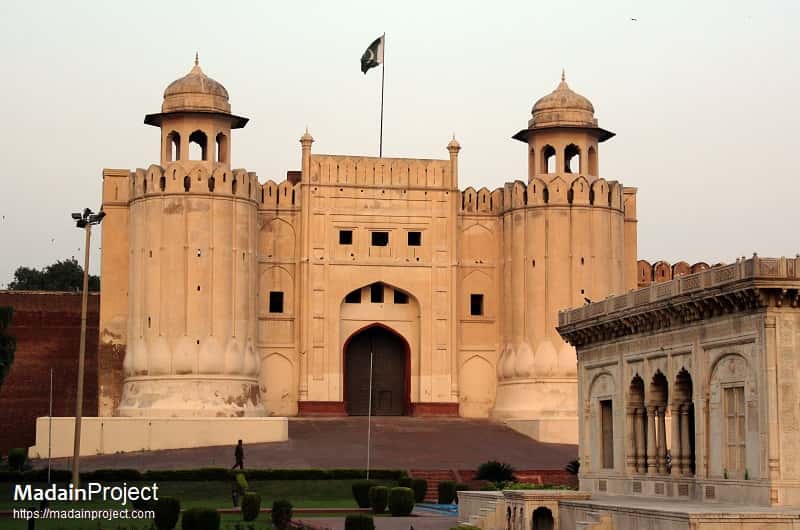 Lahore Fort is a walled complex that covers some 36 acres (14.5 hectares), the fort is a splendid example of Mughal architecture; it was partially built by Akbar (reigned 1556–1605) and extended by the next three emperors. There is evidence that a mud fort was in existence here in 1021, when Mahmud of Ghazni invaded this area. Akbar demolished the old mud fort and constructed most of the modern fort on the old foundations.

The Hazuri Bagh (حضوری باغ) is a garden in Lahore, bounded by the Lahore Fort to the east, Badshahi Mosque to the west, the Samadhi of Ranjit Singh to the north, and the Roshnai Gate to the south. The Serai Alamgiri caravanserai formerly stood where Hazuri Bagh is now located. The garden was planned and built under the supervision of Faqir Azizuddin in the traditional Mughal style layout. After its completion, it is said, Ranjit Singh, at the suggestion of Jamadar Khushhal Singh constructed a baradari (pavilion) here. 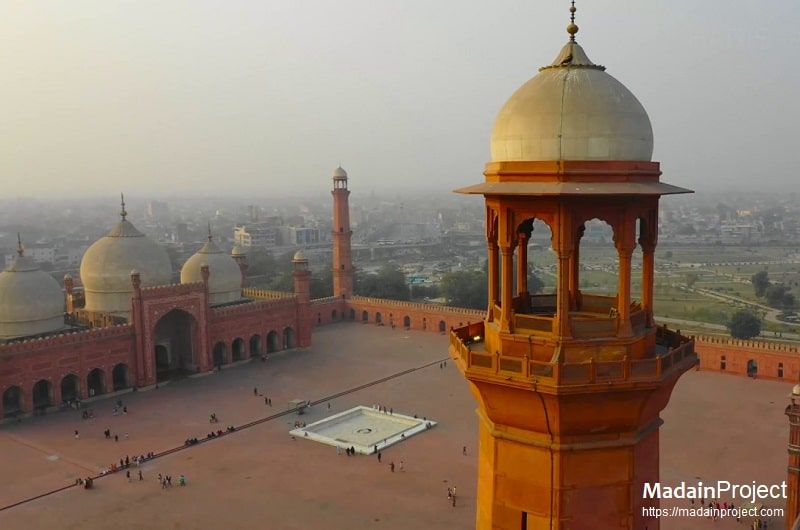 The Badshahi Masjid (بادشاہی مسجد), Imperial Mosque, is a Mughal era masjid, located west of Lahore Fort along the outskirts of the Walled City of Lahore. It is widely considered to be one of Lahore's most iconic landmarks. The Badshahi Mosque was built by Emperor Aurangzeb in 1671, with construction of the mosque lasting for two years until 1673. The mosque is an important example of Mughal architecture, with an exterior that is decorated with carved red sandstone with marble inlay.

The Samadhi of Ranjit Singh is an 18th-century building in Lahore, Pakistan that houses the funerary urns of the Sikh ruler Ranjit Singh (1780 - 1839). It is located adjacent the Lahore Fort and Badshahi Mosque, as well the Gurdwara Dera Sahib which marks the spot where the 5th guru of Sikhism, Guru Arjan Dev, died. Construction of the building was started by his son, Kharak Singh on the spot where he was cremated, and was completed by his youngest son, Duleep Singh in 1848.