The Lahore Fort (شاہی قلعہ) Shahi Qila, "Royal Fort", or "Imperial Fort") is a citadel in the city of Lahore, Punjab, Pakistan. The fortress is located at the northern end of walled city Lahore, and spreads over an area greater than 20 hectares.

Though the site of the Lahore Fort has been inhabited for millennia, the first record of a fortified structure at the site was regarding an 11th-century mud-brick fort. The foundations of the modern Lahore Fort date to 1566 during the reign of Emperor Akbar, who bestowed the fort with a syncretic architectural style that featured both Islamic and Hindu motifs. Additions from the Shah Jahan period are characterized by luxurious marble with inlaid Persian floral designs, while the fort's grand and iconic Alamgiri Gate was constructed by the last of the great Mughal Emperors, Aurangzeb, and faces the renowned Badshahi Mosque.

After the fall of the Mughal Empire, Lahore Fort was used as the residence of Emperor Ranjit Singh, founder of the Sikh Empire. The Sikhs made several additions to the fort. It then passed to the control of the East India Company after they annexed Punjab following their victory over the Sikhs at the Battle of Gujrat in February 1849. In 1981, the fort was inscribed as a UNESCO World Heritage Site for its "outstanding repertoire" of Mughal monuments dating from the era when the empire was at its artistic and aesthetic zenith.

Bab Akbari
The Bab Akbari (Gate of Akbar, اکبری دروازہ), served as the main entrance to the fort during the Mughal era. Located on the eastern flank of Qila' Lahore, it is physically less impressive than the Alamgiri gate, located on the western side of the fort. During the reign of emperor Aurangzeb the use of this gate as the royal entrance was abandoned in favour of the Alamgiri Gate. The gate is also known as the Masti Gate (مستی دروازہ) or the Masjid Gate after the Maryam Zamani Masjid adjacent to the fort. The gate is elevated from the ground level and the central arched portal is wide enough for an elephant to cross its wide wooden door.

Bab Alamgiri
The iconic Bab Alamgir (Alamgiri Gate, عالمگیری دروازہ) was the only major addition to the fort built by Emperor Aurangzeb. It was likely constructed at the same time as the nearby Badshahi Masjid which it faces. The gate is noted for its heavily fluted bastions crowned with domed pavilions. Located at the western end of the fort, the Alamgiri Gate is the modern functional entrance of the Lahore Fort. It connects the main fort complex with the adjacent Huzuri Bagh.

The monumental arched entrance was designed to allow the emperor’s elephant mounted caravan to pass through. It leads to the central square hall having deep arched recesses on the east and north and a staircase leading to the upper storey buildings. The archway on the south leads to interior of the fort.

Diwan Aam
The Diwan-i Aam (Commonor's Hall, دیوان عام), also known as the "Hall of the Forty Columns", occupies a prominent place within the Lahore fort, sitting immediately to the south of the royal jharoka (royal audience dais) which had been in use since the reign of Jahangir. It was built style of a Chehel Sotoun, a Persian style 40-pillar public audience hall, a style similar to the Diwan-i-Aam at the Agra Fort. The Diwan-i-Aam was used as a hall for the emperors to hold an audience with commoners.

The current structure was built by the British in 1849 after their victory against the Sikhs. It was destroyed by cannon fire in 1841 CE during the succession struggle following the deaths of Kharak Singh and his son Nau Nihal and was reconstructed by the British 1846 CE.

Chaharbagh of Jahangir
The panoramic view of Charbagh of Jahangir (Jahangir's Quadrangle Garden, جہانگیری چہار باغ), as seen from the southwest, is located in the north eastern corner of the fort, and is the largest quadrangle garden in the Fort of Lahore. The construction started during the Akbar's reign and finished under Jahangir (1617-18 CE). Akbar's syncretic style is noted in the quadrangle, as it employs column brackets carved in the form of animals. The quadrangle's layout differs from other Mughal quadrangles which are based upon the layout of a Persian paradise garden and instead is formed by concentric rectangles with a fountain in its centre.

Kala Burj
The Kala Burj (Black Tower or The Black Pavilion, کالا برج) as it stands today substantially differs from its original design as in Shah Jahan was a summer pavilion in the northwest corner of the Khilwat Khana Charbagh. The vaulted ceilings in the pavilion feature paintings in a European-influenced style of angels which symbolize the virtuosity of King Solomon, who is regarded as the ideal ruler in the Quran, and a ruler with whom Jahangir identified. Angels directing djinns are also painted on tiles in the ceiling, which also reference King Solomon.

The pavilion is the most significant of the Jahangir-era additions to the Lahore Fort. During the Sikh Period (cira 1780 CE) an upper level was added, and the British made numerous alterations including the addition of a liquor bar. The interior frescos dating from the Mughal and Sikh era were also plastered over at this time.

Khilwat Khana Chaharbagh
The Khilwat Khana Charbagh, also known as the Paien Bagh (Lower Garden, پائین باغ) or the with Khilwat Khana (room of solitude) in the right background and Kala Burj to the left. The Charbagh was constructed as the private residence of Emperor Shah Jahan. The quadrangle was a self-contained world, equipped with a mosque in its southwest corner and rooms for guards and servants along the perimeter, as well as royal baths.

Lal Burj
The Lal Burj (The Red Pavilion or the Red Tower, لال برج) entrance from the Shah Jahan quadrangle. It has an octagonal in plan. Like the nearby Kala Burj (Black Pavilion), the Lal Burj was built during the reign of Jahangir and Shah Jahan. Octagonal in plan, it was used as a summer pavilion with its primary windows open to the north. The surviving interior frescoes are mostly from the Sikh period, as is the upper level.

Makateeb Khana
The Makateeb Khana, also spelled as the, Makatib Khana, a Persian-style compound with pointed-arch arcades and deep iwans at the center of each of the four sides. It is more likely to be a part of a larger complex serving the emperor as an inscription facility at the site mentiones the structure as "Daulat Khana e Jahangiri" (residence of emperor Jahangir).

Women's Mosque
The small Masjid Qila in the southwest corner of the Khilawat Khana courtyard is a small, heavily damaged mosque that originally served the women of Shah Jahan's court. Stripped of its red sandstone and marble veneer and lacking a roof it is almost unrecognizable but for its distinctive orientation toward Mecca and its surviving mihrab (niche) at the center of the west wall. To the south (left) of a the mosque is a small Sikh-era pavilion.

Moti Masjid
The Moti Masjid (موتی مسجد), or Pearl Mosque, is a relatively small structure located at the western side of the fort. It is built entirely of white marble mined from the town of Makrana in contemporary Rajasthan. The mosque is one of the few buildings inside the fort that deviate from the overall north-south orientation of the complex, satisfying the liturgical requirement that the mosque's mihrab (central niche) face directly toward Mecca.

Hathi Paer
The Hathi Paer, literally meaning the "Elephant's Foot", located at the northwest corner of the fort; just south of the Shah Burj Quadrangle. They were designed with extremely wide treads and shallow riser height to allow royal elephants to ascend from ground level to the top of the fort. The stairs form a three sided courtyard with the south wall having been demolished to create a modern path into the fort from the southeast. The only original entrance to the courtyard was through the Hathi Pol, a large gateway at its southwest corner. The exterior of the Hathi Pol is integrated into Jahangir's Paint Wall ensemble.

Deewar Jahangiri
The Deewar e Jahangir (Wall of Jahangir), is the northwest facade of the Qila tiled in nearly 7000 square meters of mosaics depicting hunts and royal recreation, decorated on the orders of Jahangir. Scenes include polo games, animal hunts, and views of trees and vegitation. The mosaics do not form a coherent narrative and the project was completed by Shah Jahan. 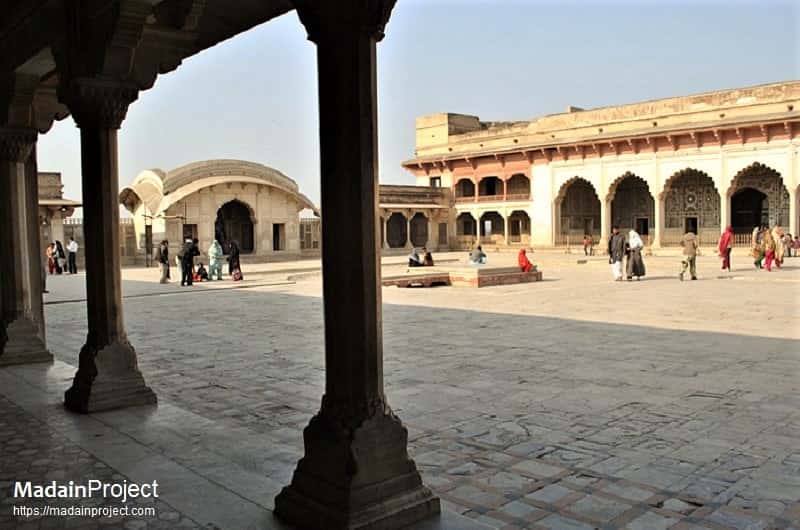 Shah Burj
Shah Burj (Shah Burj quadrangle) stands at the northwest corner of Lahore Fort, built by Shah Jahan and served as the residence of the empress. It is the most preserved part of the fort today. Various pavilions, including the Naulakha run along the western side and north is dominated by the Musamman Burj and Shish Mahal. Beneath the quadrangle is an extensive basement area that served as the empress's summer residence.

Haveli Maharani Jindan
The Haveli of Maharani Jindan (مہارانی جنداں کی حویلی) also called Mai Jindan Haveli is of unknown origins and believed to be a Mughal structure but attributed to the Mai Jindan, Chand Kaur because of the extensive additions by the Sikhs. It is a two-storied building and is presently the site of the Sikh Gallery Museum.