The Jameh Nabi Yunus (جامع النبي يونس) is a historic mosque in the city of Mosul (ancient Nineveh). It was situated on the western slope of Tel al-Tawbah, or Tel Nabi Yunus, one of the two most prominent mounds. On 24 July 2014, the building was blown up by the Islamic State, damaging several nearby houses.

Located on the edge of what was once the bustling city of Nineveh, the capital of the Assyrian Empire, Nabi Yunus is Arabic for Prophet Jonah, mentioned in the Quran and the Hebrew Bible. It was one of the most important mosques in Mosul and one of the few historic mosques in the east side of the city. Current mosque was renovated and expanded during 1990s under Saddam Hussein. In 1924, a grand minaret was added by a Turkish architect who described the glow of the site as God’s gift to Mosul.

Originally built in the early thirteenth century, the mosque probably replaced an Assyrian Church believed to be the burial place of prophet Jonah, called Jonah's Tomb. The mound where the mosque of prophet Yunus stands was also the site of an earlier Assyrian palace built by King Esarhaddon, circa 681–669 BCE.

While some historians mention that this place is not the shrine of the Prophet Yunus, but rather it is the shrine of one of the previous prophets when Nineveh was a religious center.

In both books, Quran and the Hebrew Bible, prophet Yunus (Jonah) travels to Nineveh to warn its citizens that they will be destroyed unless they repent their sins.

Many Muslims believe that the prophet's bones were kept at the site. A shrine was later built. It is thought to contain a tooth from the whale that, according to tradition, swam with Yunus in its belly for three days.

Academic research does indeed suggest that Yunus was not buried there. In fact, the prophet is reputed to have graves all around the world.

In reality the bones attributed to Nabi Yunus probably belonged to a Christian patriarch named Henanisho I of the Church of the East. He was buried in the monastery in 701.

In reality the bones attributed to Nabi Yunus probably belonged to a Christian patriarch named Henanisho I of the Church of the East. He was buried in the monastery in 701. 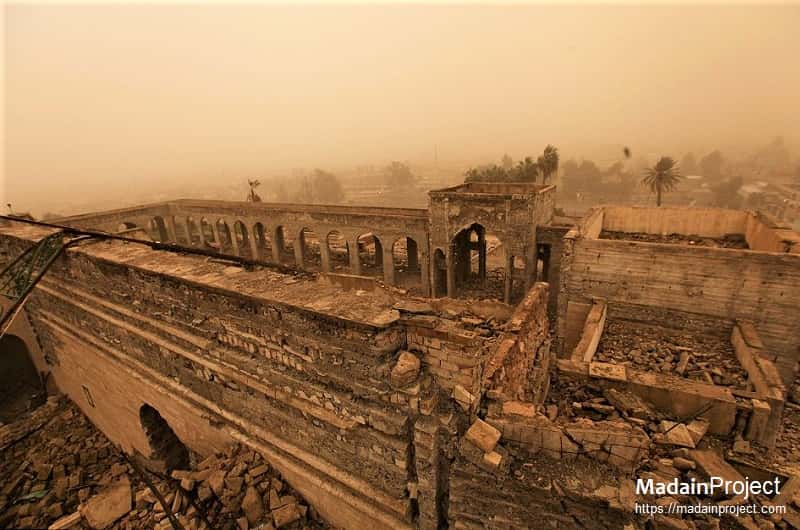 In July 2014, weeks after overrunning Mosul and much of Iraq's Arab heartland, ISIS militants rigged the shrine and blew it up, sparking global outrage and especially within the local Muslim community. In March 2017, after ISIS was driven out, a system of tunnels about one kilometre long were found under the mosque. Although all moveable items had been removed there were still Assyrian reliefs, structures and carvings along the walls.

Evidence that there might be a palace beneath Nabi Yunus was found during excavations in the 1850s by two archaeologists, Austen Henry Layard and his Mosul-born assistant Hormuzd Rassam. After uncovering the ruins of a palace at Kouyunjik on the other side of the river Tigris, Layard and Rassam turned their attention to Nabi Yunus. The holiness of the site, however, prevented further exploration. The "prejudices of the people of Mosul," wrote Layard bitterly, "forbade any attempt to explore a spot so venerated for its sanctity."

A subsequent excavation conducted by the Iraqi government between 1989 and 1990 did not probe far into the mound for fear of damaging the mosque’s structural foundations. Just like in the 1850s, the imam warned that the shrine could be damaged. But when east Mosul was liberated from IS in January 2017, archaeologists found something peculiar beneath the rubble of the mosque. There were many more tunnels than had been documented before. In fact, there were more than 50 new tunnels, some as short as a few metres, others longer than 20.