The temple as seen today was built between 421 and 406 BCE. Its architect may have been Mnesicles, and it derived its name from a shrine dedicated to the legendary Greek hero Erichthonius. The sculptor and mason of the structure was Phidias, who was employed by Pericles to build both the Erechtheum and the Parthenon. Some have suggested that it may have been built in honor of the legendary king Erechtheus, who is said to have been buried nearby. 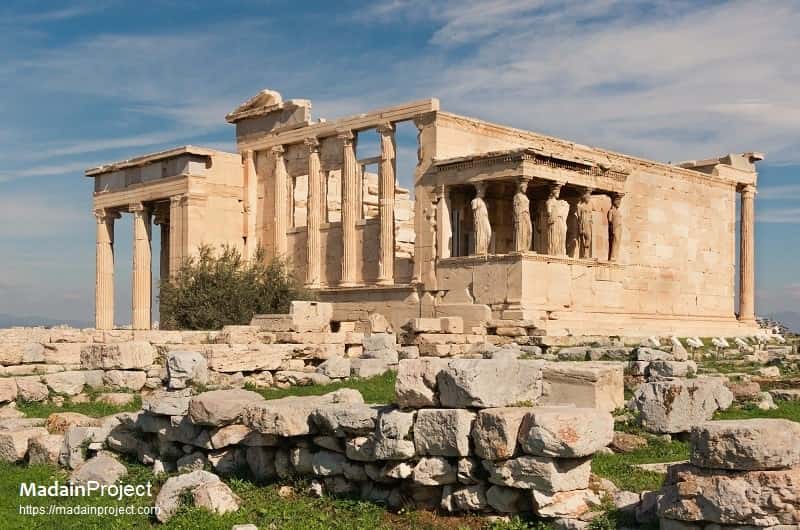 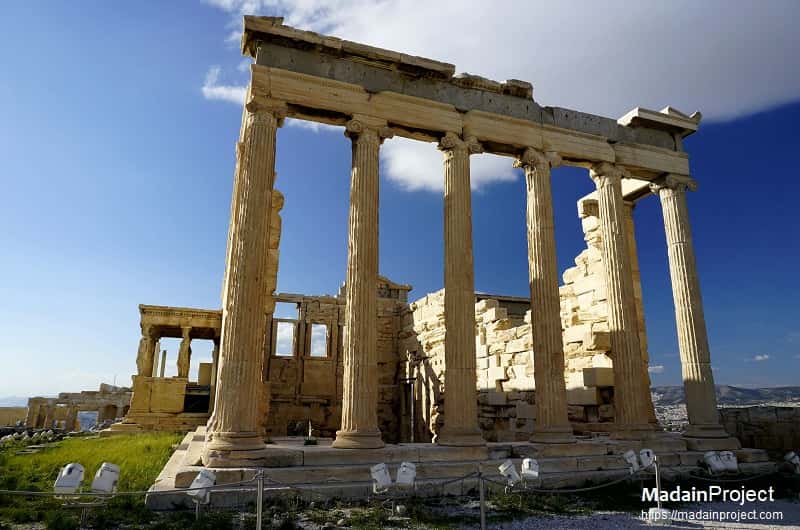 Peisistratid Construction
Erechtheus was mentioned in Homer's Iliad as a great king and ruler of Athens during the Archaic Period, and Erechtheus and the hero Erichthonius were often syncretized. It is believed to have been a replacement for the Peisistratid temple of Athena Polias destroyed by the Persians in 480 BCE. The main structure consists of up to four compartments, the largest being the east cella, with an Ionic portico on its east end. The Erechtheion was built as a replacement for the “Old Temple” (the foundations of which now lay between it and the Parthenon). 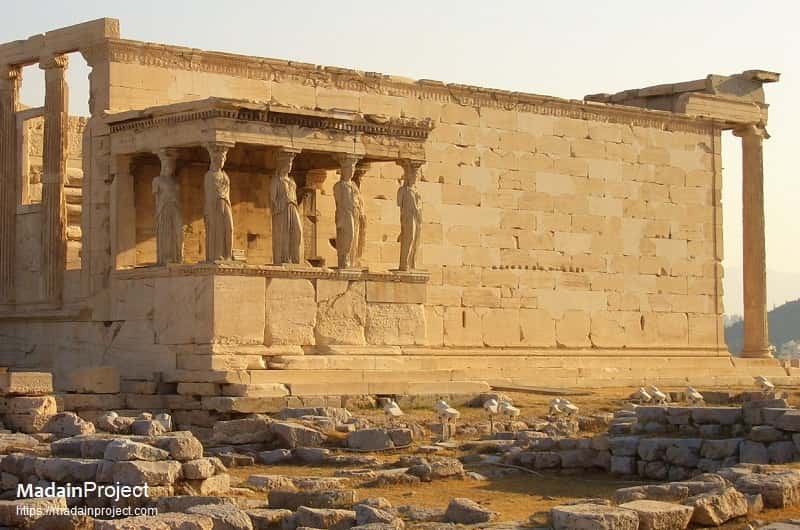 Pericles' Building Program
The building of the Erechtheion concluded the ambitious building program initiated by Pericles during a time that the Athenian empire enjoyed unprecedented political and cultural influence. Its completion found Athens at the mercy of Sparta, and its treasury depleted. By no means however did the splendor of the Athenian cultural achievements cease to shine as evident in their influence on the art and architecture of the next two and a half millennia. 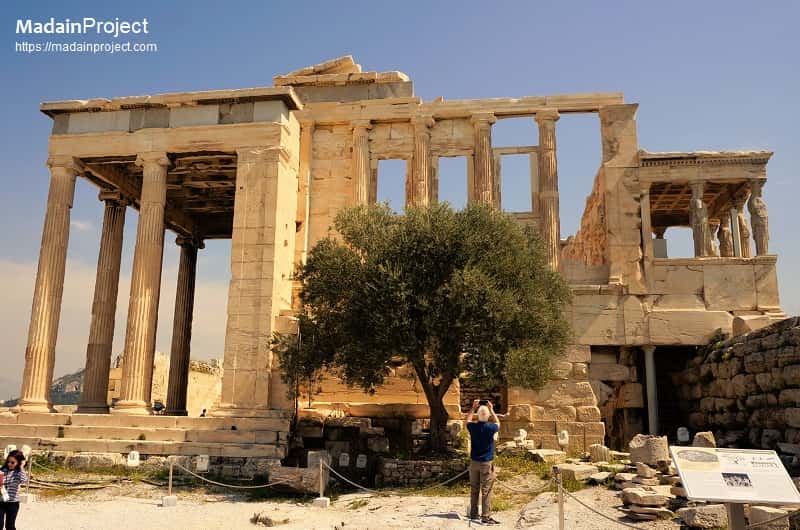 Reconstructions and Renovations
The Erechtheion underwent extensive repairs and reformation for the first time during the 1st century BCE, after its catastrophic burning by the Roman general Sulla. The intact Erechtheum was extensively described by the Roman geographer Pausanias (1.26.5 - 27.3), writing a century after it had been restored in the 1st century CE. If still in use by the 4th-century, the temple would have been closed during the persecution of pagans. The building was altered decisively during the early Byzantine period, when it was transformed into a church dedicated to the Theometor. 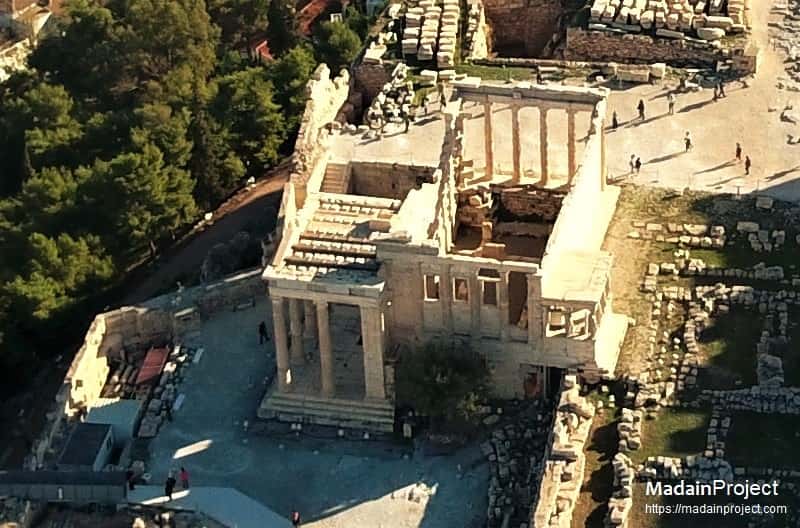 Location and Construction
The entire temple is on a slope, so the west and north sides are about 3 m (9 ft) lower than the south and east sides. It was built entirely of marble from Mount Pentelikon, with friezes of black limestone from Eleusis which bore sculptures executed in relief in white marble. The Erectheum was associated with some of the most ancient and holy relics of the Athenians, such as the Palladion, a xoanon or "wood-carven effigy" of Athena Polias (Protectress of the City), and some the holiest sites. 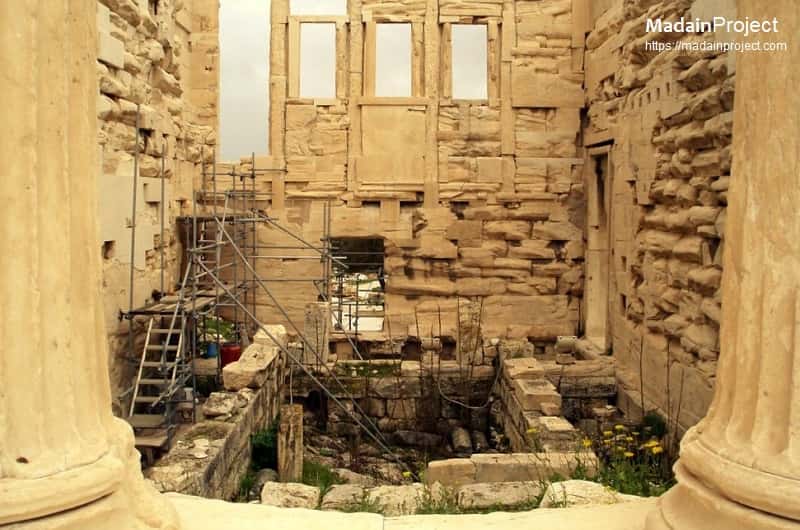 Interior
One current thinking would have the entire interior at the lower level and the East porch used for access to the great altar of Athena Polias via a balcony and stair and also as a public viewing platform. Pausanias described it in the 2nd century: "There is also a building [in Athens] called the Erekhtheion . . . Inside the entrance are altars, one to Poseidon, on which in obedience to an oracle they sacrifice also to Erekhtheus, the second to the hero Boutes, and the third to Hephaistos . . . here is also inside--the building is double--sea-water in a cistern."

Porch of the Maidens
The famous "Porch of the Maidens", with six draped female figures (caryatids) as supporting columns. The porch was built to conceal the giant 15-ft beam needed to support the southwest corner over the Kekropion, after the building was drastically reduced in size and budget following the onset of the Peloponnesian war. In 1800 one of the caryatids removed by Lord Elgin in order to decorate his Scottish mansion, and were later sold to the British Museum (inspect). In 1979, the five original Caryatids (inspect) were moved to the Old Acropolis Museum and replaced in situ by exact replicas. 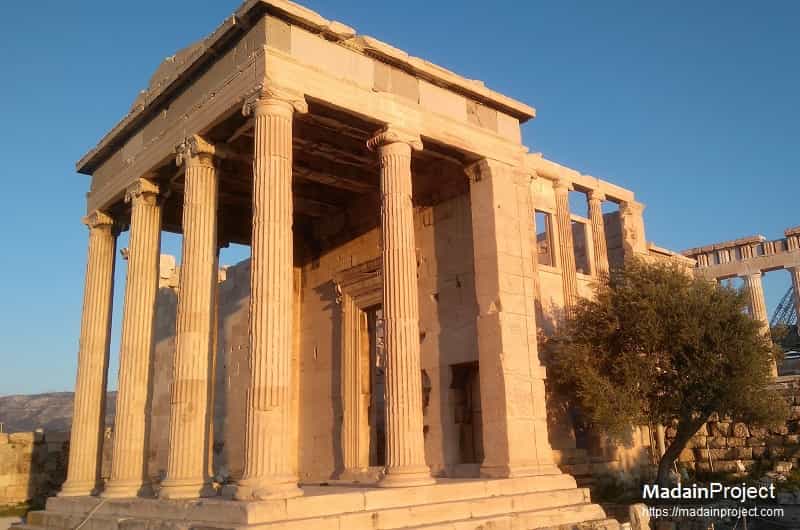 Ionic Porch
On the north side, there is another large porch with six Ionic columns. The exterior of the temple incorporated a continuous frieze, as did the north prostasis. The theme of the frieze is not known, but its form was unusual in that white marble figures, carved in relief were attached to a flat background of dark gray marble. 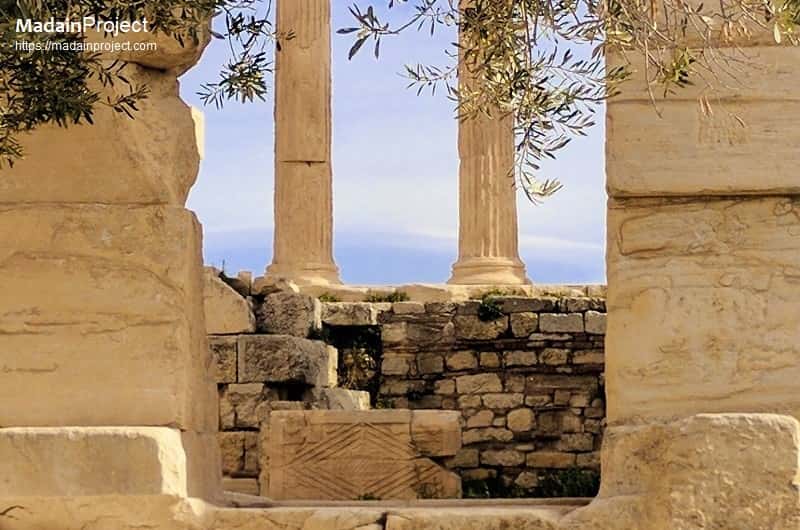 Interior Plan
Of the interior plan of the Erechtheion we know very little. Many modern plans depict it as divided into two or more rooms, and one could guess that there were more than one levels in the original plan.