The Zamzam Well (بئر زمزم) is a historic deep water well; located some 20 meters east of the Kahab, inside the Masjid al-Haram Complex, Mecca. Millions of pilgrims visit the well each year while performing the Hajj or Umrah pilgrimages in order to drink its water. The well is in the Wadi Ibrahim (Valley of Abraham). According to Islamic tradition, it is a miraculously generated source of water from God, which sprang thousands of years ago when Ibrahim's infant son ʾIsmaʿil was left with his mother Hajar in the desert, where he was thirsty and kept crying.

The Zamzam well was excavated by hand, and is about 30 meters (98 feet) deep and 1.08 to 2.66 meters (3 feet 7 inches to 8 feet 9 inches) in diameter. The well originally (during the time of Prophet Muhammad) had two cisterns in the first era, one for drinking and one for ablution.

Sometimes the water from Zam Zam is also given to someone, who's death is near.

Source of Zam Zam well, water entering the well from the stony horizon. The name of the well comes from the phrase Zomë Zomë, meaning "stop, stop" a command repeated by Hagar during her attempt to contain the spring water.

Islamic history states that the Zamzam Well was revealed to Hagar (Hājar), the second wife of Ibrahim (Abraham) and mother of Ishmael. By the instruction of God, Abraham left his wife and son at a spot in the desert and walked away. She was desperately seeking water for her infant son, but she could not find any, as Mecca is located in a hot dry valley with few sources of water.

Hagar ran seven times back and forth in the scorching heat between the two hills of Safa and Marwah, looking for water. Getting thirstier by the second, the infant Ishmael scraped the land with his feet, where suddenly water sprang out. There are other versions of the story involving God sending his angel, Gabriel (Jibra'il), who kicked the ground with his heel or wing(depending on which version of the story) and the water rose.

Pre-Islamic Era
The siqaya (the giving of drink to pilgrims) was first Hagar’s purview. Being the only source of water it attracted the south Yemenite tribe of Jurhum and Hagar negotiated their settlement in Mecca. According to the tradition, overtime the well was lost and forgotten. The rediscovery of the well is associated with the grandfather of the Prophet, 'Abd al-Muttahb. At a much later, but unspecified date, he experienced a dream in which the place of Zamzam was revealed to him. From this time on the well, according to tradition, enjoyed a continuous existence.

Jahiliyya
During the era of Jahiliyya the Zamzam Well was known as the 'Iishba'e (إشباع), literally meaning "the satisfaction". 'Abbas ibn 'abd ul-Muttalib relate; that the people used to compete to get the water from this well. They would bring their children to the well and make them drink its water until satisfied.

Prophetic Era
At the time of prophet Muhammad, it was a simple well surrounded by a fence of stones. Later on during the prophetic period, two cisterns were built next to the watering hole, one of drinking water and another one for ablution.

Abbasid Era
Then in the era of the Abbasid caliph al-Mansur 771 CE (154/155 Hj.) a dome was built above the well for the first time, and it was tiled with marble. Around 775 CE, caliph al-Mahdi rebuilt the well during his caliphate with a dome covered with mosaic. The well was further restored in 835 CE, when the dome was again covered with marble under al-Mu'tasim.

Ottoman and Saudi Era
The Building over the well of Zam Zam circa 1940 CE. This building was installed by Ottoman Sultan Abdul Hamid II in 1915 CE, during one of the most extensive restoration of Masjid al-Haram. To facilitate crowd control, the building housing the Zamzam was moved away from its original location, to get it out of the way of the Tawaf, when millions of pilgrims would circumambulate the Kaaba. 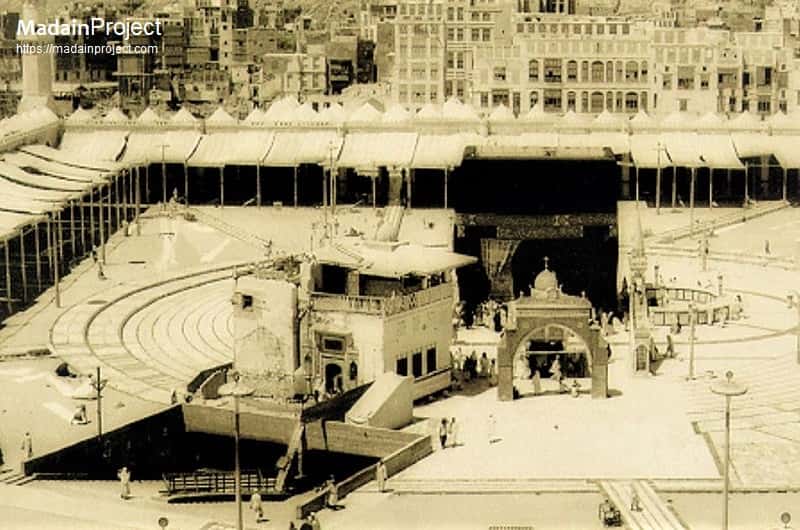 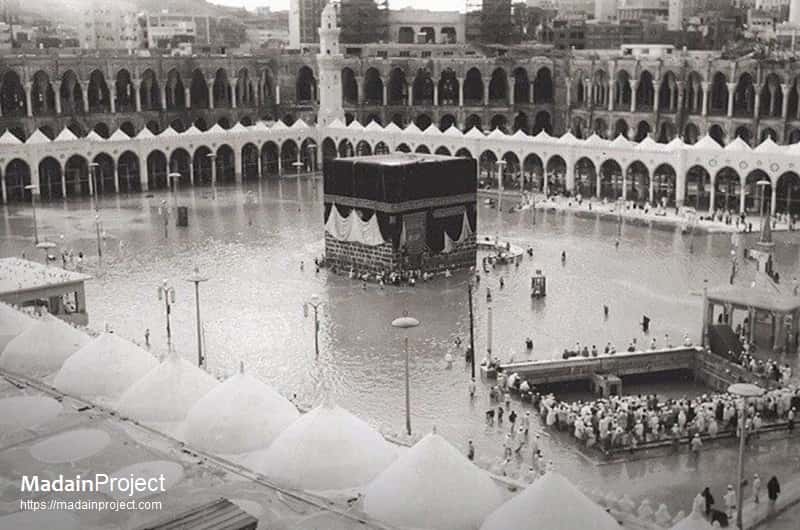