Wilson's Arch is the modern name for the ancient stone arch whose top is still visible today, where it is supported against the Northeast corner of Wailing Wall, so that it appears on the left to visitors facing the Wall. It once spanned 42 feet (13 m), supporting a road that continued for 75 feet (23 m) and allowed access to a gate that was level with the surface of the Temple Mount during the Second Temple period.

The excavations started circa 1968, it would take 17 years, until 1985, until the entire length of the tunnel would be cleared.

The arch was identified in 1864 by 19th-century explorer and surveyor Charles William Wilson, for whom it is now named. In Wilson's day (circa 1867 CE), this area was totally walled off and had a cemented floor, an abandoned pool known in Arabic as “al-Burak” (after Mohammed’s mystical steed of the Night Journey). Wilson had joined the Ordnance Survey of Jerusalem in 1864, continuing to participate in the city surveying project that was established to improve the city's water system. The Palestine Exploration Fund (PEF) later commissioned him to survey Western Palestine, as well.

While the arch is named for Wilson, there is a claim that Swiss physician Titus Tobler had earlier discovered and identified the structure as part of the bridge between the Temple Mount and the Upper City in his 1845/46 writings. According to some, Tobler passed on information about the arch to Wilson, whose name was linked to the arch because he was the one who publicized the find.

The date of its original construction is disputed, as some scholars date it to before the destruction of Herod's temple in 70 CE, while others place it much later, to the Arab Umayyad Period, 651–750. Stinesbring believed that the Arch had not been rebuilt, believing that the way it was bonded to the wall around the Temple indicated it was part of the plan during Herod's time: "a definitive part of the ancient Temple structure".

Today, scholars do agree that the site of this current arch was the beginning of a series of arches that spanned the central valley, connecting the Temple Mount to Jerusalem's western hills. It is believed by those who date the arch to the later period that it was a replacement for an earlier arch erected during the Second Temple period. 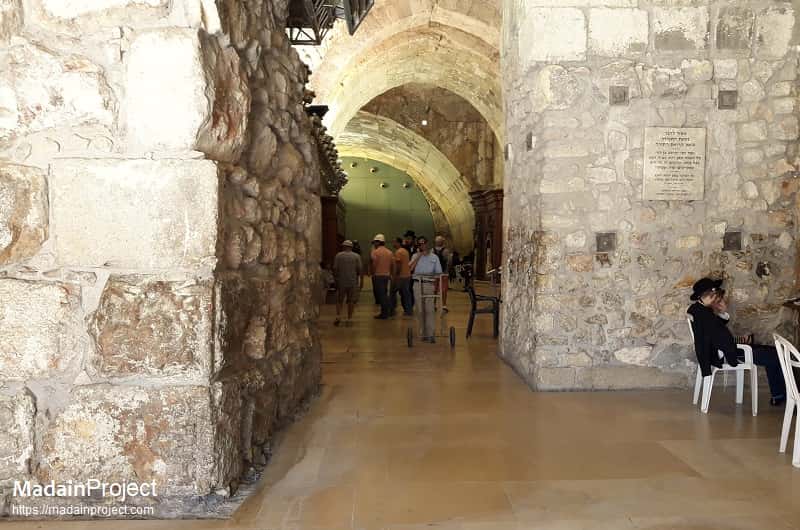 Some scholars, now date the arch's construction to the period under Arab rule during the seventh and eighth centuries CE. Dan Bahat writes that during the excavations enough evidence was found to convince him that despite earlier beliefs that the arch was built during Herod's time, the later dating is correct. Based on the evidence of the excavations, the arch once spanned 42 feet (13 m), and although it once was 75 feet (23 m) high, carrying a road over the valley and the pavement constructed during the time of Herod's rule, only a 20-foot (6.1 m) portion is visible today.

Along with Robinson's Arch, it was one of the largest free-standing masonry arches in the world during the time it was constructed and utilized. A square shaft cut down under the arch allows sighting of the wall's original massive foundations, a Roman theatre, "with fourteen courses of dressed stone below the present ground level". The majestic size and the enormous stones testify to Herod's magnificent aspirations. Today the arch is located below the Chain Road leading to the Chain Gate

The Western Stone, located in the north section of the Arch, is a monolithic stone block forming part of the lower level of the Western Wall. Weighing 570 tonnes (628 tons), it is one of the largest building blocks in the world. The stone is 13.6 meters (44.6 ft) long, 4.5 meters (15 ft) wide and has an estimated height of 3.5 meters (11.5 ft). It is considered to be one of the heaviest objects ever lifted by human beings without powered machines. It is the largest building stone found in Israel and second in the world.