The well of Rumah (بئر رومة), also known as the Well of Uthman ibn Affan (بئر عثمان بن عفان), is a historic water well in the city of Medina. Today, part of the "Well of Uthman's Waqf", it is located some 6 kilometers north-west of Masjid an-Nabawi, and north of Masjid al-Qiblatain.

The Bir Rumah or the Bir Uthman, is a large water-well, which is most likely fed by spring water. Dug in the Wadi al-Aqiq, it is also called "Kalib Mazni" (the old well of Mazni). It is said to be one of the best wells of Mazni.

According to a local tradition, when Abu Kard beseiged Medina in 495 CE, he was relieved of sickness by drinking water from this well. Some assert that this was the only fresh water source in Medina at the time, when the Prophet Muhammad arrived in the city. The water-well was the property of a local man from the tribe of Banu Ghiffar tribe, named Rumah, or according to some traditions it was a Jew named, Mazni or from Mazni. This water-well was subsequently purchased by Uthman (according to some traditions he paid some 38,000 dirhams and some mention that he paid upwards of 100 camels).

The original water well hole is situated near the northern edge of the date farm, while the modern and larger water well is located near the southern end north of the mosque of Bir Uthman. 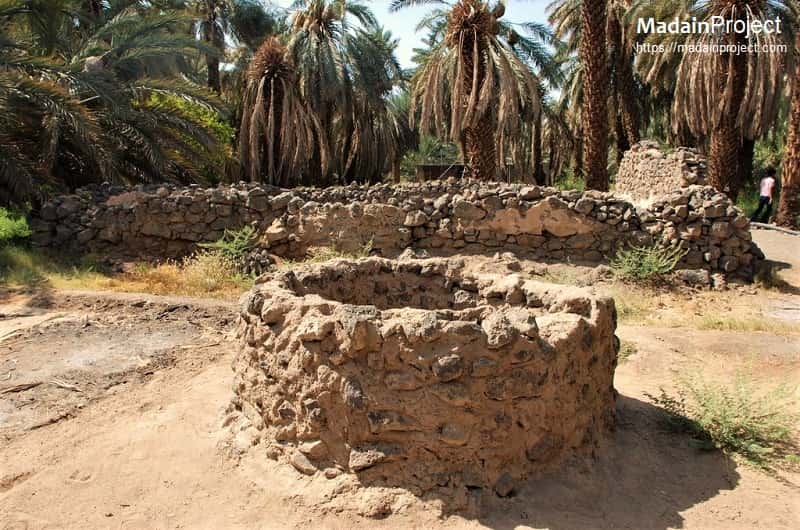 According to Islamic tradition the well which originally belonged to a man named Rumah, a Jewish Medinan, who used to sell the water for profits. And at that time it was quite difficult for Muslims, who were already struggling financially, to pay for the water they needed. Seeing this, on the request of prophet Muhammad, Uthman ibn Affan purchased the well from its Jewish owner and made a waqf for all, Muslims and non-muslims. This well is still active and the Waqf tradition is still on-going.

The well of Uthman is part of an Islamic Waqf today, revenues from which are used to help the poor and pilgrims to the Haramain. The Waqf complex includes the historic water well, date farms, remains of an Ottoman era water reservoir, a mosque, modern water hole, reservoirs and a water tower.