The Wadi es-Sebua, or Valley of the Lions (Arab: وادي السبوع), is the site of two New Kingdom Egyptian temples, including one speos temple constructed by the 19th dynasty Pharaoh Ramesses II, in Lower Nubia.

The local Arabs, inspired by the stone sculptures of sphinxes, which lined the entrance to the first temple, named the place as 'Wadi es-Sebua' or the Valley of the lions. The very first temple at the site was built by Amenhotep III which was later on (probably)restored by Rameses II.

When the Wadi es-Sebua temples were threatened by flooding from the construction of the Aswan Dam project, the temple was dismantled in 1964 with U.S. support by the Egyptian Antiquities Service. They were moved to a new site only 4 km west from their original location, today known as the New Wadi es-Sabu'a temple complex. 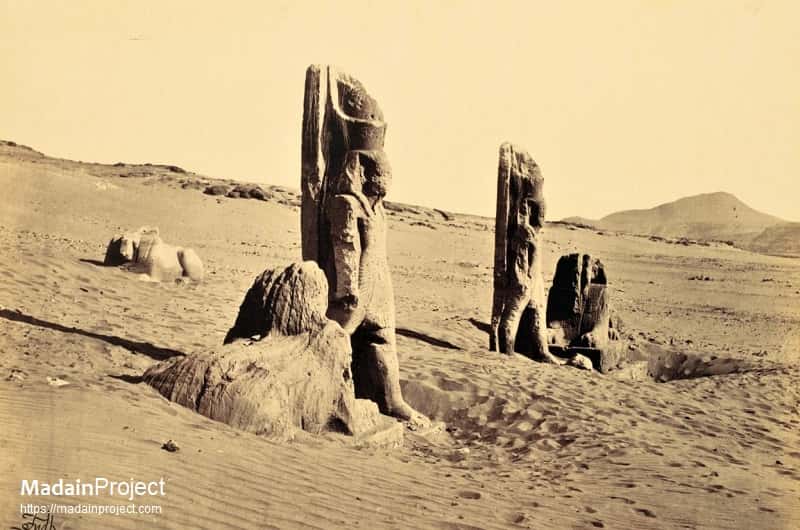 The New Wadi es-Sabua is an archaeological site in Egypt. It is located only 4 km west from the original site of Wadi es-Sebua, which today contains three ancient Egyptian temples in Lower Nubia, the temples of Wadi-es Sebua, Maharraqa and Dakka respectively.

Temple of Amenhotep III
Situated about 200 meters south of the well known temple of Amun and Ramesses II and like the latter it was oriented towards the river as well. On the walls pharaoh Amenhotep is recorded as the king responsible for its construction. The structure consisted of a small rock cut sanctuary in the west with several rooms mainly built with mud bricks in the front part to the east.

Temple of Amun-Ra and Ramesses II
It was the second larger temple, built at el-Sebua was known as "The Temple of Ri'amesse-meryamun [Ramesses II] in the Domain of Amun". The temple of Wadi es-Sebua was the third sanctuary or chapel constructed from rock with a forecourt built with stones that Ramesses II erected in Nubia. The temple of "Ramesses beloved of Amon in the field of Amun" was used as a quay or resting place for boats during its descent of the Nile river.

Temple of Dakka
The Greco-Roman Temple of Dakka (معبد الدكة), dedicated to Thoth, is today located at the New Wadi es-Sebua area. Dedicated to Thoth, the god of wisdom in the ancient Egyptian pantheon, it initially consisted on just a small one-room shrine or chapel, first begun in the 3rd century BCE and subsequently enlarged. During the Roman period, the Emperors Augustus and Tiberius further enlarged the structure with "the addition, at the rear, of a second sanctuary as well as inner and outer enclosure walls with a large pylon.

Temple of Maharraqa
It is an unfinished ancient Egyptian temple from the Roman period. Intended to be dedicated to Isis and Serapis, it has not been securely attributed to any Roman emperor's reign. The only part of the structure that was finished "was a court measuring 13.56 X 15.69 m, which was surrounded on three sides by columns". The Temple of Maharraqa features an architectural curiosity with a winding spiral staircase at a corner of the court, which led to its roof.