Villa of the Mysteries

The Villa of the Mysteries (Villa dei Misteri) is a relatively well-preserved suburban ancient Roman villa on the outskirts of Pompeii, southern Italy. The Villa is named for the paintings in one of its numerous rooms. This space which may have been a dining room (triclinium in Latin), was decorated with very fine frescoes, dating back to about 70-60 BCE.

APA
Villa of the Mysteries (n.d.). Retrieved on January 18, 2022, from https://madainproject.com/villa_of_the_mysteries

It is famous for the series of exquisite frescos in one room, which are usually thought to show the initiation of a young woman into a Greco-Roman mystery cult. These are now among the best known of the relatively rare survivals of Ancient Roman painting from the 1st century BCE. Like the rest of the Roman city of Pompeii, the villa was buried in the eruption of Mount Vesuvius in 79 CE and excavated from 1909 onwards (long after much of the main city).

Although covered with metres of ash and other volcanic material, the Villa sustained only minor damage during the eruption of Mount Vesuvius in 79 CE. Most of its walls, ceilings, and particularly its frescoes survived largely intact. Since its excavation, the roofing and other parts of the house have been maintained as necessary.

In addition to fine rooms for dining and entertaining, the Villa had more functional spaces.

The Villa may be easily accessed from Pompeii, lying some 400 metres northwest of the town walls, beyond a road with funerary monuments on either side. As a suburban villa, it had a close relationship with the city but was still separate from it.

A key feature that helps to identify these scenes as Bacchic is the depiction of maenads, the deity's female followers. These devotees are often shown dancing with swirling drapery on painted Greek pottery from the sixth century BCE onward, centuries before the cult spread to the Romans.

Winepress
A wine-press discovered during excavations has been restored in its original location. It was not uncommon for the homes of the very wealthy to include areas for the production of wine, olive oil, or other agricultural products, especially since many elite Romans owned farmland or orchards in the immediate vicinity of their villas. 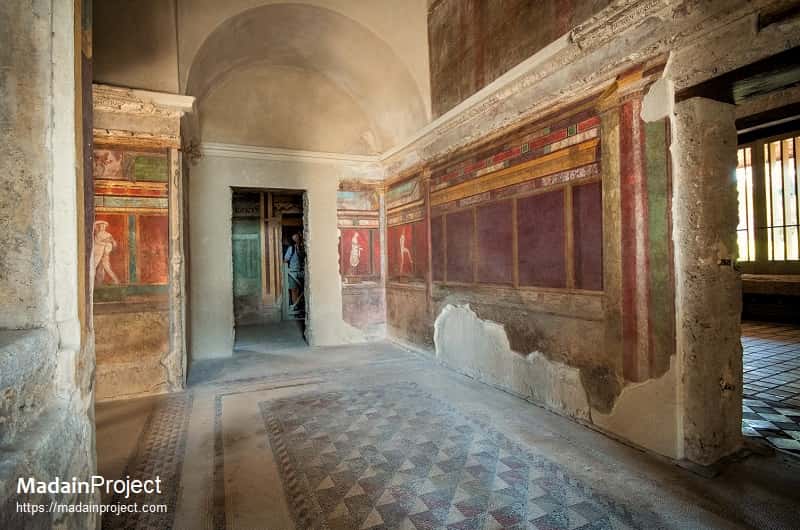