The city dates from the Ubaid period circa 3800 BCE, and is recorded in written history as a city-state from the 26th century BCE, its first recorded king being Mesannepada. The city's patron deity was Nanna (in Akkadian, Sin), the Sumerian and Akkadian (Assyrian-Babylonian) moon god, and the name of the city is in origin derived from the god's name. UNUGKI, literally "the abode (UNUG) of Nanna".

The site is marked by the partially restored ruins of the Ziggurat of Ur, which contained the shrine of Nanna, excavated in the 1930s. The temple was built in the 21st century BCE (short chronology), during the reign of Ur-Nammu and was reconstructed in the 6th century BCE by Nabonidus, the last king of Babylon. The ruins cover an area of 1,200 metres (3,900 ft) northwest to southeast by 800 metres (2,600 ft) northeast to southwest and rise up to about 20 metres (66 ft) above the present plain level. 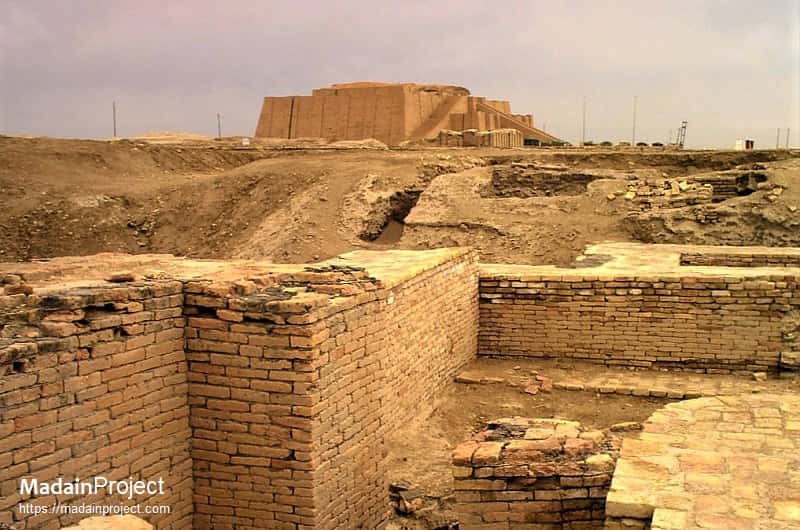 The city, said to have been planned by Ur-Nammu, was apparently divided into neighbourhoods, with merchants living in one quarter, artisans in another. There were streets both wide and narrow, and open spaces for gatherings. Many structures for water resource management and flood control are in evidence. Houses were constructed from mudbricks and mud plaster. In major buildings, the masonry was strengthened with bitumen and reeds. Ur was surrounded by sloping ramparts 8 metres high and about 25 metres wide.

Temenos Precinct
The Temenos of Ur, also known as the "Sacred Precinct" or the "Royal Precinct", was a walled area located a little to the north-west of the city center. It consisted of royal and religious buildings, including the Ziggurat, Nanna Court, Boat Shrine, Giparu (Nin-Gal shrine), Dub-Lal-Mah (the gateway shrine to the ziggurat), Palace of Ur-Nammu (Ekhursag).