This page attempts to enlist all the known Tombs in Petra (المقابر في البتراء). There are eight designs of tombs in Nabataean architecture. They are distinguished by the complexity of their carvings and whether they have columns, pediments or arches. al-Khazneh Tomb
The al-Khazneh (the Treasury) at Petra is the most iconic archaelogical site. The structure is believed to have been the mausoleum of the Nabatean King Aretas IV in the 1st century CE. It became to be known as "Al-Khazneh", or The Treasury, in the early 19th century by the area's Bedouins as they had believed it contained treasures. Although the purpose of the Treasury is unclear, a burial crypt was found directly beneath it. There are no inscriptions or ceramic evidence associated with the tomb that allows us to directly date it. 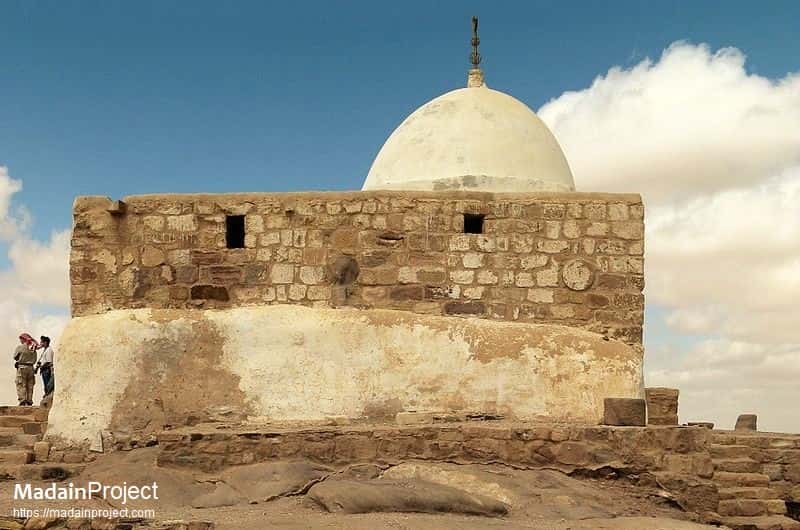 Tomb of prophet Aaron
The Tomb of Aaron is a small shrine over the top of the Jabl Haroun in Petra. It is a small white shrine covering the supposed grave of Prophet Haroun brother of prophet Moses. The 14th-century Mamluk mosque which stands here with its white dome is visible from most areas in and around Petra. This site at Jabal Hārūn (Aaron's Mountain) is occasionally visited by Jewish pilgrims as well as Muslims. A tablet with Arabic inscription over the entrance states that the shrine was built by Mohammad ibn Qalawun, in the year 739 of the Hegira (about 1363 CE).

Urn Tomb
The so called Urn tomb, suggested to belong to the Nabataean King Malchus II who died in 70 CE. The vaults supporting the terrace as-sun (prison) – perhaps myth, or reflecting a later use. It is one of the so-called one of the Royal Tombs. The tomb is located on the East Ridge (also called the East Cliff), in the side of the mountain known as al-Khubta, above Wadi Musa. To the north of the Urn Tomb is the Silk Tomb, and north of that is the (mis)called Corinthian.

Palace Tomb
The facade of the Palace Tomb, the lower part consists of 12 decorated columns and four gates. The second portal from the left is one of the most detriorated. The four portals lead in to four separate burial chambers, with three distinct stories in it's facade. It is one of the so-called Royal Tombs. Meant to resemble a palace, it measures about 50 meters width and is almost as high, with part of the upper levels built instead of carved out of the rock. It was probably erected near the end of the Nabataean period at the end of the 1st century CE.

Silk Tomb
Silk Tomb takes its name from majestic multi- colored layers of rock that appear like a silk drapery over a tomb. Located next to the distinctive Urn Tomb in the Royal Tomb group is the so-called Silk Tomb, noteworthy for the stunning swirls of pink-, white- and yellow-veined rock in its facade. The Silk Tomb is highly damaged by environmental influences with the entire facade surface gone exposing the underlying multicolored sandstone giving this tomb its name.

al-Deir Monastery
The al-Deir Monastery was built by the Nabataeans in the 1st century and measuring 50 metres (160 ft) wide by approximately 45 metres (148 ft) high, architecturally the Monastery is an example of the Nabatean Classical style. It is the second most visited building in Petra after al-Khazneh. The Deir's facade is comparable to the Khazneh; in each building, the upper story is designed as a broken pediment, interrupted by a tholos that is topped by a large urn. However, the plain (though impressive) facade of the Deir lacks the fine detailing that is found on the face of the Khazneh.

Roman Soldier's Tomb
Recent archaeological evidence at the Nabataean tomb known as 'Roman Soldier Tomb' has indicated that this well-proportioned facade was probably part of a complex that included in front of it giving an interesting new insight into nabataean architecture, the tomb was accessible through a large courtyard with porticos and two-story buildings on both sides and a triclinium opposite the entrance. The main building phase of the tomb complex took place during the third quarter of the 1st century CE.

Corinthian Tomb
The so-called Corinthian Tomb, one of the most sadly eroded façades in Petra. The whole design – including its columns and floral capitals – was clearly modelled on that of the Treasury, but its squat proportions and eclectic style make it less aesthetically pleasing. It is believed to date from the reign of Malichus II (40-70 CE), but no name has been associated with its construction.

Tomb of Sextius Florentinus
The tomb of Sextius Florentinus is the only tomb in Petra with an identifiable occupant. A Latin inscription over the doorway indicates that the tomb belonged to Roman governor Sextius Florentinus, who oversaw the province of Arabia. His dying wish was to be buried in Petra and his tomb was carved around 130 CE. It is located a few hundred metres around the hill from the Royal Tombs. Unlike many other tombs, the interior is worth a look for the clearly discernible loculi (graves); there are five carved into the back wall and three on the right.

Obelisk Tomb
Obelisk Tomb is located between the Petra Visitor Centre and the entrance to the Siq (south side of the path), there is a fine tomb with four pyramidal obelisks, built as funerary symbols by the Nabataeans in the 1st century BCE. The four obelisks, together with the eroded human figure in the centre, probably represent the five people buried in the tomb. It is an elaborate two story tomb carved from the solid rock. Its facade is an elaborate mixture of Egyptian, Greek, Indian and Nabataean architectural styles.

Turkamaniya Tomb
Turkamaniya Tomb, large hall from which a narrow passageway leads to an equally large burial hall. The first hall was probably used as a dining room. This kind of arrangement can be seen in other tombs easily accessible to tourists, such as the Obelisk tomb, the Treasury, and the Urn Tomb. The Turkamaniya Tomb inscription mentions graves, chambers, a courtyard, porticos, dwelling places, gardens, dining hall, water cisterns, terraces, and walls.

Street of Facades
Street of Facades also known as the Outer Siq or Theater Necropolis is lined with tall, impressive tombs, with large facades or false faces on their fronts and leads down into the heart of the city proper. It is considered by some experts to be the oldest burial burial ground in Petra. On both sides, there are a number of Nabataean burial interfaces decorated with grindstones along with other decorations; and some of these interfaces were destroyed by natural factors, it is believed that these interfaces represents some of the senior officials in the city or princes.

Uneishu Tomb
Uneishu Tomb among the lesser tombs, the name comes from the inscription found nearby, presumably the surname of the family once buried inside. The tomb’s tall façade flanked by two columns with a double cornice is called a Hegr design. On the right is a much smaller version of the same architectural style. Historians believe the Uneishu Tomb was built for the “brother” or chief minister of Shaqilath II, a Nabataean queen. It was constructed around 76 CE.

Unfinished Tomb
The Unfinished tomb showing carving method of beginning from the top and working downward. El-Habis. Had it been finished it would have been the most elaborate and the largest tomb structure. This unfinished façade reveals a lot of information about both the effort expended and the process used by Nabatean masons in carving deeply into the irregular cliff face. The reasons why tombs such as this one remained unfinished aren't very clear.

Renaissance Tomb
The elegant façade of Renaissance Tomb with an intricately-made set of crowns and six Nabataean jars. crowned by a gable that has three funerary urns at the corners framed by Nabataean engaged pilasters. The interior has rock- carved loculi that were not used for burials; the tomb may be dated to 2nd century CE. The tomb is called 'Renaissance Tomb' because the archivolt with an urn on top evokes such elements of the Italian Renaissance architecture.

Broken Pediment Tomb
Broken pediment tomb located in Wadi Farasa, is thought to have been carved in the 1st century CE.

al-Habis Tombs
In the area of al-Habis bedouins had taken over some of the tombs as residential structures. When Jordan authorities established the archaeological area of Petra they had to evict some Bedouins who living in these. According to Burckhardt no one lived in these on his travel to Jabl al-Haroun where he sacrificed a goat.