The Garden Tomb is a rock-cut tomb complex in Jerusalem, which was unearthed in 1867 CE and has subsequently been considered by some Christians to be the site of the burial and resurrection of Jesus. The tomb has been dated by Israeli archaeologist Gabriel Barkay to the 8th–7th centuries BCE. The Garden Tomb is adjacent to a rocky escarpment which since the mid-nineteenth century has been proposed by some scholars to be Golgotha.

APA
The Garden Tomb (n.d.). Retrieved on September 16, 2021, from https://madainproject.com/the_garden_tomb

The Garden Tomb is adjacent to a rocky escarpment which since the mid-nineteenth century has been proposed by some scholars to be Golgotha. It has since been known as Skull Hill or Gordon's Golgotha. In contradistinction to this modern identification, the traditional site where the death and resurrection of Christ are believed to have occurred has been the Church of the Holy Sepulchre at least since the fourth century.

After the Reformation there were increasing doubts regarding the traditional holy places. The earliest detailed investigation of the tomb (illustration) itself was a brief report prepared in 1874 by Conrad Schick, a German architect, archaeologist and Protestant missionary, but the fullest archaeological study of the area has been the seminal investigation by Gabriel Barkay, professor of Biblical archaeology at the Hebrew University of Jerusalem and at Bar-Ilan University, during the late twentieth century.

Burial Cave
The cave-tomb has two chambers, the second to the right of the first, with stone benches along the sides of each wall in the second chamber, except the wall joining it to the first, and along the back wall of the first chamber; the benches have been heavily damaged but are still discernible. The burial cave at the Garden Tomb was originally an Iron Age II multi chambered triple bench sepulchre cut out six to seven hundred years before Jesus was born.

This tomb is the place believed by many to be the resting place of Jesus. Some archaeologists question the authenticity of the tomb because typological features suggest that it is a tomb originally hewn in the time of the Old Testament and not a “new tomb” as specifically stated in Scripture. Furthermore, two painted crosses (inspect) were discovered inside the tomb. Though the red pigment quickly faded upon being exposed to air, these markings were of Byzantine design and potentially as old as the 5th or 6th centuries. The crosses were accompanied by Greek letters referencing Jesus as the Alpha and Omega.

Rolling Stone Groove
This particular tomb also has a stone groove running along the ground outside it, which Gordon argued to be a slot that once housed a stone (a rolling stone is placed nearby as a visual aid (inspect)), corresponding to the biblical account of a stone being rolled over the tomb entrance to close it. The edge of the groove outside the tomb has a diagonal edge, which would be unable to hold a stone slab in place (the slab would just fall out); additionally, known tombs of the rolling-stone type use vertical walls on either side of the entrance to hold the stone, not a groove on the ground.

Winepress
Gospel of John also specifies that Jesus' tomb was located in a garden; consequently, an ancient wine press and cistern have been cited as evidence that the area had once been a garden, and the somewhat isolated tomb adjacent to the cistern has become identified as the Garden Tomb of Jesus. Discovered in 1924, the ancient (probably Roman era) wine press indicates that the site was indeed a (fruit) garden and may very well have been owned by a wealthy person, adding to the speculation of the site being owned by Joseph of Arimathea. It is located south of the tomb's entrance. 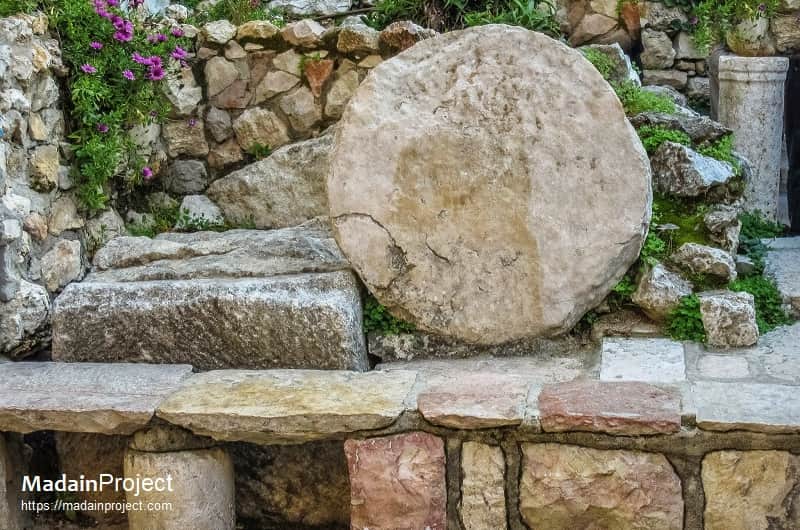