The Broad Wall, also dubbed as the Hezekiah's Wall, is an ancient defensive wall in the Old City of Jerusalem. The wall was unearthed in the 1970s by Israeli archaeologist Nahman Avigad and dated to the reign of King Hezekiah (late eighth century BCE). It is located in the Jewish Quarted.

The Broad Wall is a massive defensive structure, seven meters thick. The unbroken length of wall uncovered by Avigad's dig runs 65 metres (71.1 yd) long and is preserved in places to a height of 3.3 metres (3.6 yd). It was long believed that the city in this period was confined to the fortified, narrow hill running to the south of the Temple Mount known as the City of David.

Avigad's dig demonstrated that by the late eighth century the city had expanded to include the hill to the west of the Temple Mount. The motivation for building the walls was the expected invasion of Judea by Sennacherib. The wall (locate) is referred to in Nehemiah 3:8 and Isaiah 22:9–10. The uncovered remains of this wall are 23 feet wide and 213 feet long. This portion of the wall ran west from the Temple Mount toward the western corner of the southwestern hill (which would be the Citadel today).

This wall was built over the Central Valley and up onto the Western Hill to enclose homes in the part of the city that expanded when the Assyrians invaded Israel to the north. Many people from the northern kingdom of Israel fled their country and moved into Judah and Jerusalem in order to escape the Assyrian invasion. Hezekiah protected them with this wall. The remains of the wall which is exposed today measure 22 feet wide and 213 feet long.

The Broad Wall was built during Hezekiah’s expansion (illustration) of the city. Jews from the northern tribes of Israel, who had been overrun by the Assyrians in 721 BCE, migrated down to Judah and the city of Jerusalem for protection at this time. They settled outside the city walls to the west on the Western Hill. To protect them and their residences Hezekiah fortified the western part of this newly expanded city around 721 BCE with a wall.

Evidence uncovered during excavation seems to indicate that Hezekiah had to destroy some homes (inspect) in order to build it. Isaiah addresses this very issue in his book, in chapter 22 (Isaiah 22:8-11). The book of Nehemiah places the Broad Wall near the Temple Mount wall when, during the dedication of the new wall, one group of priests walked in procession on the wall, past the remains of this Broad Wall (Nehemiah 12:38). 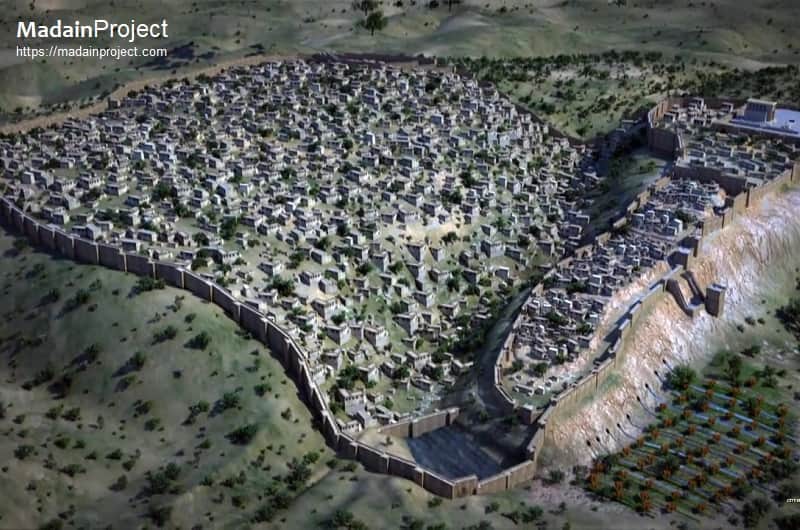