The temple of Khnum at Esna also known as the temple of Esna, dedicated to the god Khnum, his consorts Menhit and Nebtu, their son, Heka, and the goddess Neith, was remarkable for the beauty of its site and the magnificence of its architecture. The Temple of Esna conveys a sense of the importance which the Ancient Egyptians placed upon their places of worship. All Egyptians who entered the confines of an Egyptian temple were required "to comply with the strict rules regarding ritual purity."

It was built of red sandstone, and its portico consisted of six rows of four columns each, with lotus-leaf capitals (inspect), all of which however differ from each other. The temple contains very late hieroglyphic inscription, dating from the reign of Decius (249–251 CE). Another temple of the same period has been identified at Kom Mer, about 12 km to the south, but cannot be excavated because a modern village is built over it. There was a smaller temple, dedicated to the triad of Latopolis, about two miles and a half north of the city, at a village now called el-Dayr. Here, too, is a small zodiac of the age of Ptolemy III Euergetes (246–221 BCE).

This latter building was destroyed in the 19th century, as it stood in the way of a new canal. The temple of Esna was cleared of the soil and rubbish which filled its area when Vivant Denon visited it, and served as a cotton warehouse in the mid-19th century.

With the exception of the jamb of a gateway—now converted into a door-sill—of the reign of Thutmose II (Eighteenth Dynasty), the remains of Latopolis belong to the Ptolemaic or Roman eras. Ptolemy III Euergetes, the restorer of so many temples in Upper Egypt, was a benefactor to Latopolis, and he is depicted upon the walls of its temple followed by a tame lion, and in the act of striking down the chiefs of his enemies.

The name of Ptolemy V Epiphanes is found also inscribed upon a doorway. Although the scale of the ruins are impressive, their sculptures and hieroglyphics attest to the decline of Egyptian art. The west wall features reliefs of Ptolemy VI Philometor and Ptolemy VIII Physcon. The pronaos, which alone exists, resembles in style that of Apollonopolis Magna (Edfu), and was begun not earlier than the reign of Claudius (41–54 CE), and completed in that of Vespasian, whose name and titles are carved on the dedicatory inscription over the entrance. On the ceiling (inspect) of the pronaos is the larger Latopolitan Zodiac. The name of the emperor Geta, the last ruler that can be read in hieroglyphics, although partially erased by his brother and murderer Caracalla (212), is still legible on the walls of Latopolis. Before raising their own edifice, the Romans seem to have destroyed even the basements of the earlier Egyptian temple. The ceremonial way, which probably linked the quay to the temple, has disappeared. The quay bears cartouches of Marcus Aurelius. 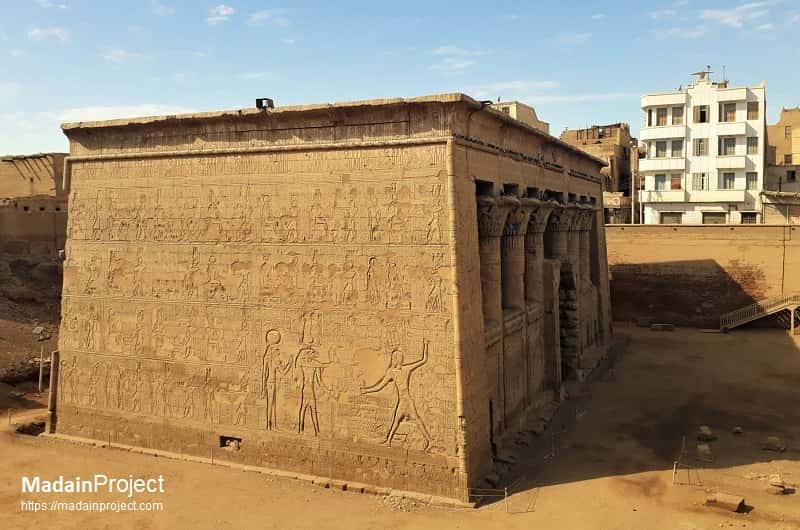