The depiction of Temple Mount in Holyland Model of Jerusalem as it stood in the first century CE before the 70 CE destruction. It was called the second temple and was the Jewish holy temple which stood between 516 BCE and 70 CE.

The Temple Mount section of the Holyland Model of First Century CE Jerusalem; with the Royal Stoa to the left, the Shushan Gate (modern day Golden Gate in the foreground wall), and Fortress Antonia to the right.

According to the Jewish tradition, this reconstruction replaced Solomon's Temple (the First Temple), which was destroyed by the Neo-Babylonian Empire in 586 BCE, when Jerusalem was conquered and part of the population of the Kingdom of Judah was taken into exile to Babylon.

Herod’s Temple Mount was the focal point of Jerusalem during the time of Jesus. Sitting atop Jerusalem’s northeastern ridge, it occupied one-sixth of the city’s area. Under Herod the Great, the Temple Mount’s foundation was expanded to encompass approximately 1.5 million square feet (140,000 square meters). Its foundational walls were constructed using gigantic stones, the largest found being 45 feet long, 11.5 feet high, and 12 feet thick (13.7 m by 3.5 m by 3.7 m).

The Temple
The second Temple and the Temple Mount underwent extensive reconstruction and expansion during the reign of king Herod the Great. The first time we hear of Jesus at the Temple, he is almost seven weeks old, and Mary and Joseph bring him to the Temple courts to “present him to the Lord” (Luke 2:22).

Court of the Gentiles
This area (identify) was primarily a bazaar, with vendors selling souvenirs, sacrificial animals, food, as well as currency changers, exchanging Roman for Tyrian money because the Jews were not allowed to coin their own money and they viewed Roman currency as an abomination to the Lord.

The worshipers in Jesus’ day, like many worshipers in every age, had become religious consumers seeking to be served, as they were completely obsessed with their own agendas and comfort. Worship is about sacrifice, and many worshipers simply do not understand that fact.

Royal Stoa
The Royal Stoa or the Royal Porch as seen from the east outside the temple Mount, from Kidron valley. During the Herodian period, this colonnaded hall, known as the Royal Stoa, graced the whole length of the Southern Wall. Constructed in the shape of a basilica with four rows of forty columns each, it formed a central nave in the east end and two side aisles. For most part this was a marketplace and the main part of this building was used for the changing of money and purchase of sacrificial animals.

The Royal Porch is widely accepted to be part of Herod's work; however, recent archaeological finds in the Western Wall tunnels suggest that it was built in the first century during the reign of Agripas, as opposed to the first century BCE, while the theory that Herod began the extension and the Royal Porch is based mainly on Josephus's possibly politically motivated claim. During Herod's reign the porch was not yet open to the public. 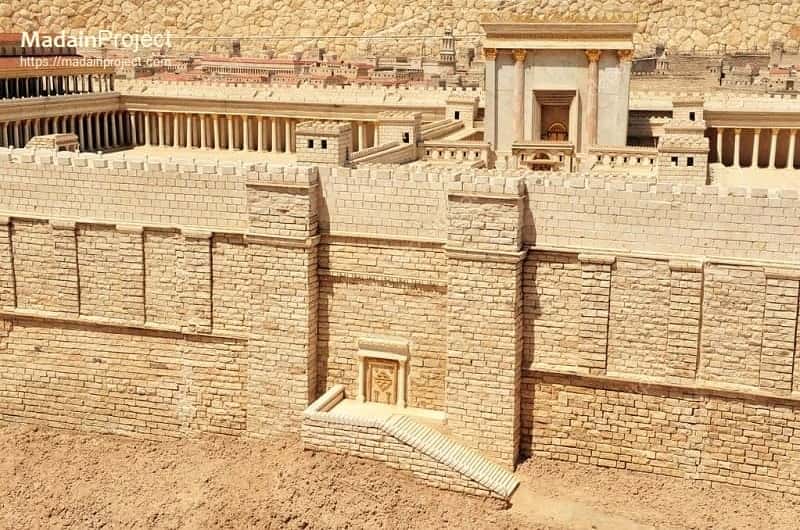 South Wall
The Southern Wall of the former Second Temple (also called Herod's Temple) in Jerusalem. The southern wall had two sets of gates The double Hulda gates to the west and triple Hulda gates (pictured wrongly here as double gate) to the east. The small square structure with triangular top is the model of Huldah's tomb. The Southern Wall is 922 feet (281 m) in length, and which the historian Josephus equates as being equal to the length of one furlong. 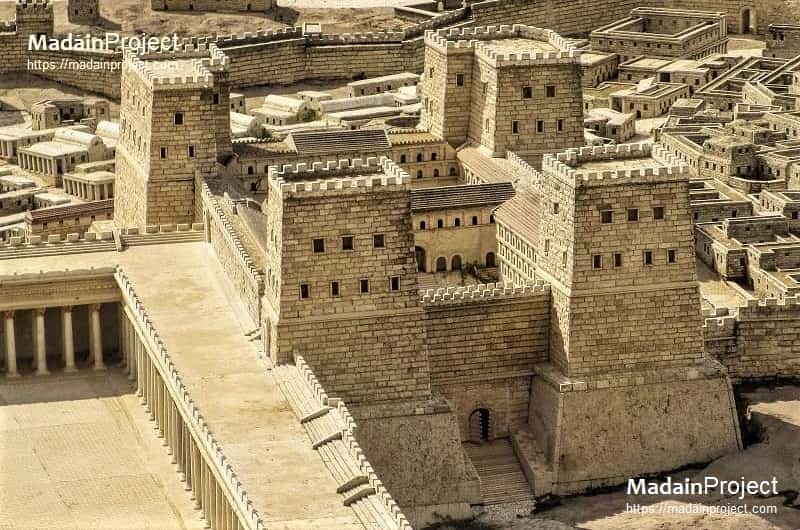 Fortress Antonia
The Antonia Fortress with Tedi Gate (small gate with triangular top) in the Holyland Model of second temple era Jerusalem. Although modern reconstructions (including this one) often depict the fortress as having a tower at each of four corners, the historian Josephus repeatedly refers to it as the tower Antonia, and stated that it had been built by John Hyrcanus for storing the vestments used in the Temple.