The Taj Mahal Complex is a funerary-religious complex, commissioned by Mughal emperor Shah Jahan in 1632 CE to house the tomb of his favourite wife Mumtaz Mahal, situated on the southern bank of the river Yamuna in the Indian city of Agra.

The Taj Mahal Complex occupies an area of some 17-hectare (42-acre), which includes a mosque and a guest house, and is set in formal gardens bounded on three sides by a crenellated wall. Construction of the mausoleum was essentially completed in 1643, but work continued on other phases of the project for another 10 years.

The Taj Mahal complex is believed to have been completed in its entirety in 1653 at a cost estimated at the time to be around 32 million rupees, which in 2020 would be approximately 70 billion rupees (about U.S. $916 million).

The Taj Mahal was designated as a UNESCO World Heritage Site in 1983 for being "the jewel of Muslim art in India and one of the universally admired masterpieces of the world's heritage". It is regarded by many as the best example of Mughal architecture and a symbol of India's rich history.

Along the southern edge of the complex, there are two levels of platforms. Where the side buildings of Masjid and Mehman Khana are located on the lower platform. And then the mausoleum it self is located on a central upper platform.

Taj Mahal Mausoleum
The Taj Mahal mausoleum is the central focus of the entire complex. It is a large, white marble structure standing on a square plinth and consists of a symmetrical building with an iwan (an arch-shaped doorway) topped by a large dome and finial. Like most Mughal tombs, the basic elements are Persian in origin. Four minarets frame the tomb, one at each corner of the plinth facing the chamfered corners. The main chamber houses the false sarcophagi of Mumtaz Mahal and Shah Jahan; the actual graves are at a lower level.

Mosque
The mosque stands along the western wall on the lower platform. It is one of the two grand red sandstone buildings that mirror each other, and face the sides of the tomb. The other building on the eastern side is the jawab (answer), thought to have been constructed for architectural balance. The mosque's basic design of a long hall surmounted by three domes is similar to others built by Shah Jahan, particularly the Masjid-i Jahān-Numā, or Jama Masjid, Delhi.

Mehman Khana
Thought to have been constructed for architectural balance, the Jawab (answer) may have been used as a guesthouse. Also known as the Jama't Khana, it is located along the eastern wall exactly opposite the Masjid. Architecturally it is exactly as the mosque, except a few differences in decorations and absence of Mihrab and musallah markers.

Darwaza-i Rauza
Also known as the great gate, it is the main gateway to the Charbagh gardens which, symbolically, represents Paradise. It stands to the north of the entrance forecourt (jilaukhana) and provides a symbolic transition between the worldly realm of bazaars and caravanserai and the spiritual realm of the paradise garden, mosque and the mausoleum.

Chaharbagh
The large charbagh (a form of Persian garden divided into four parts) provides the foreground for the classic view of the Taj Mahal. The garden's strict and formal planning employs raised pathways which divide each quarter of the garden into 16 sunken parterres or flowerbeds. A raised marble water tank at the center of the garden, halfway between the tomb and the gateway, and a linear reflecting pool on the North-South axis reflect the Taj Mahal. Elsewhere the garden is laid out with avenues of trees and fountains.

Naqqar khana
Two pavilions occupy the east and west ends of the cross axis, one the mirror of the other. In the classic charbargh design, gates would have been located in this location. In the Taj they provide punctuation and access to the long enclosing wall with its decorative crenellations. Built of sandstone, they are given a tripartite form and over two storeys and are capped with a white marble chhatris supported from 8 columns.

Forecourt Gardens
The forecourt (jilaukhana, literally meaning 'in front of house') was a courtyard feature introduced to mughal architecture by Shah Jahan. It provided an area where visitors would dismount from their horses or elephants and assemble in style before entering the main tomb complex. The rectangular area divides north-south and east-west with an entry to the tomb complex through the main gate to the north and entrance gates leading to the outside provided in the eastern, western and southern walls. The southern gate leads to the Taj Ganji quarter.

Khawasspuras
The Khawasspuras, are two residential quarters situated in the northeastern and northwestern corners of the forecourt. The khawasspuras served as living quarters for the caretakers of the tomb and the persons who performed the funerary services. These enclosures are arranged around rectangular courtyards surrounded by arcaded verandahs, two of which form the rear side of the jilaukhana's rooms. The khawasspuras were entered through the wall adjoining the main garden to the north of the southern galleries.

Southern Gate
The southern gate is the largest of all three main gates of the complex. It provides acces from the Taj Ganji quarter of the old city of Agra. The Gate is located in the southern wall of the tomb-complex, Which faces the old Mumtazabad (Modern Taj Ganj). It stand on an evelated square measuring 156 feet each way. In the central chamber, there are two uninscribed tombs of marble stone. The platform of the building is octagonal and the cupola is turnip-shaped.

Eastern Gate
The eastern gate, also known as the Sirhindi Darwaza is one of the three major entrances to the Taj Mahal Complex from land. 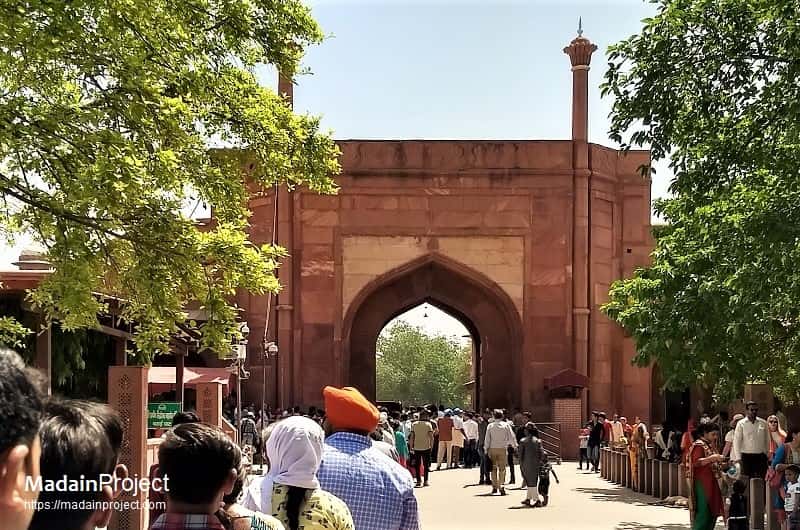 Western Gate
The eastern gate, also known as the Sirhindi Darwaza is one of the three major entrances to the Taj Mahal Complex from land.