The Sultan Ahmed Mosque (Turkish: Sultan Ahmet Camii) is a historic mosque in Istanbul. The mosque is popularly known as the Blue Mosque for the blue tiles adorning the walls of its interior. It was built during the rule of Ahmed I starting in 1609 to 1616 CE. It is part of the Sultanahmet Kulliye contains a tomb of the founder, a madrasah and a hospice. The Sultan Ahmed Mosque is still popularly used as a mosque.

The mosque was built on the site of the palace of the Byzantine emperors, in front of the basilica Hagia Sophia (at that time, the primary imperial mosque in Istanbul) and the hippodrome, a site of significant symbolic meaning as it dominated the city skyline from the south. Big parts of the south shore of the mosque rest on the foundations, the vaults of the old Grand Palace.

It was the central element of the complex (Sultanahmet Külliyesi) built by Ahmed I. Its architect was Mehmed Aga (d. 1622 CE), whose epithet "Sedefkar" refers to his mastery in mother-of-pearl. Mehmed Aga was an apprentice under Sinan (1450?-1588 CE) and Davud Aga (d. 1598 CE), two architects whose works have defined the style of this period. This mosque is considered to be the last example of Ottoman classical architecture. 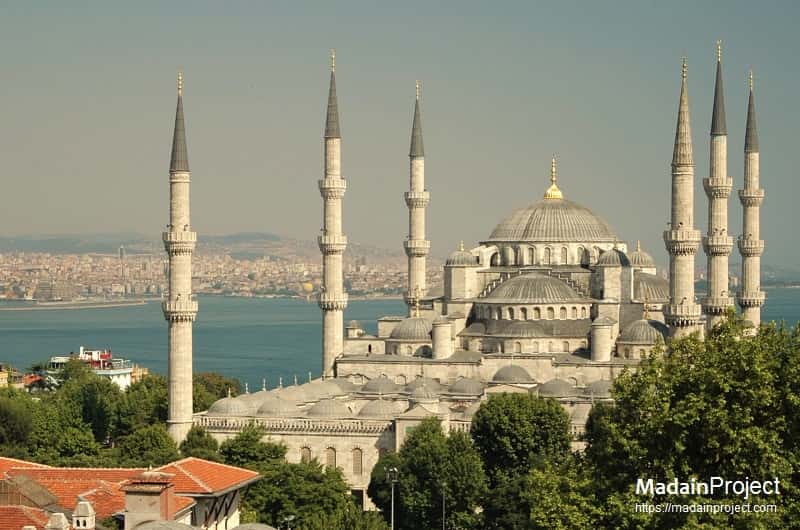 The Sultan Ahmed Mosque has five main domes, six minarets, and eight secondary domes. The design is the culmination of two centuries of Ottoman mosque development. It incorporates many Byzantine elements of the neighboring Hagia Sophia with traditional Islamic architecture and is considered to be the last great mosque of the classical period. The architect, Sedefkâr Mehmed Ağa, synthesized the ideas of his master Sinan, aiming for overwhelming size, majesty and splendor.

The façade of the forecourt was built in the same manner as the façade of the Süleymaniye Mosque, except for the addition of the turrets on the corner domes. The monumental but narrow gateway to the courtyard stands out architecturally from the arcade. Its semi-dome has a fine stalactite vaulting (muqarnas | inspect), crowned by a small ribbed dome on a tall tholobate. This style is also replicated in the the architecture of the mosque's Mihrab (inspect). 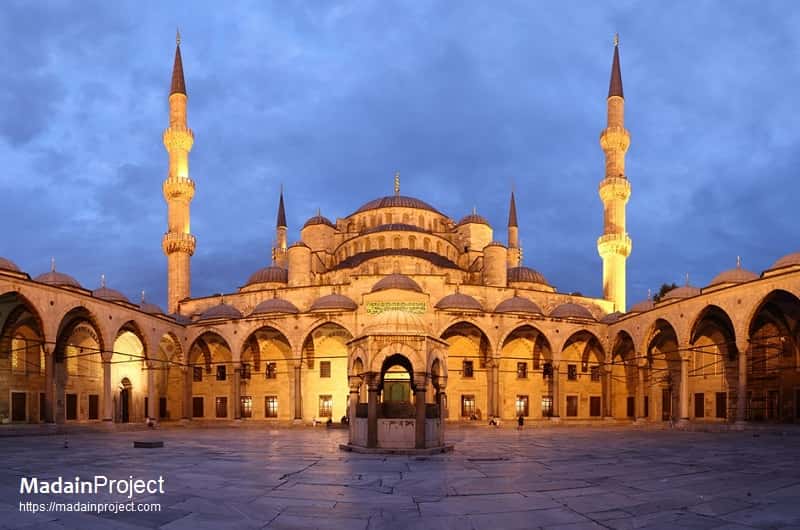 The mosque is preceded by a forecourt with a large fountain and special area for ablution. The court is about as large as the mosque itself and is surrounded by a continuous vaulted arcade (revak). It has ablution facilities on both sides. The central hexagonal fountain (inspect) is small relative to the courtyard. 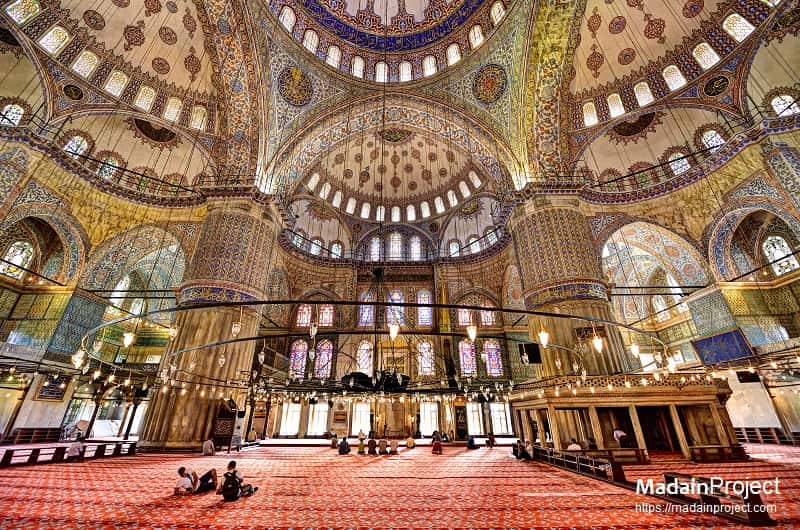 The Blue Mosque can be considered the culmination of Mehmed Agha's career, who was the last student of Mimar Sinan, had completed his mission by adding his brighter, colorful architectural style to that of his master teacher. The interior of the mosque is lined with more than 20,000 handmade İznik style ceramic tiles, made at İznik (the ancient Nicaea) in more than fifty different tulip designs. The upper levels of the interior are dominated by blue paint. More than 200 stained glass windows (inspect) with intricate designs admit natural light, today assisted by chandeliers. 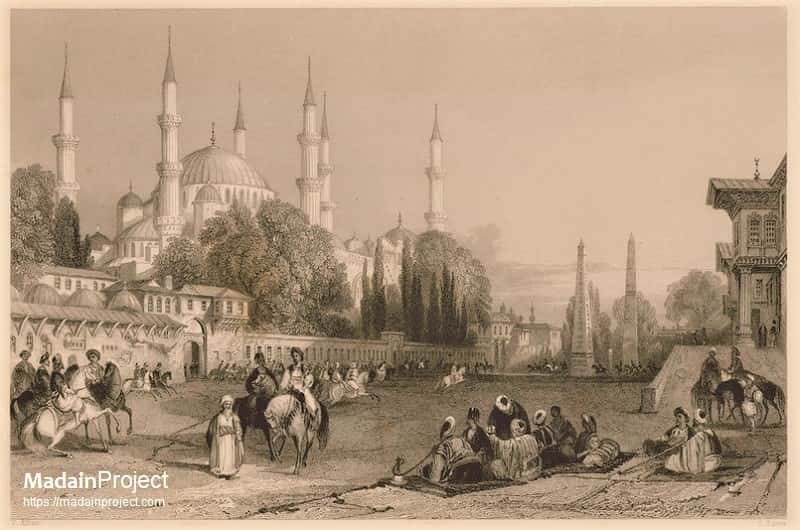 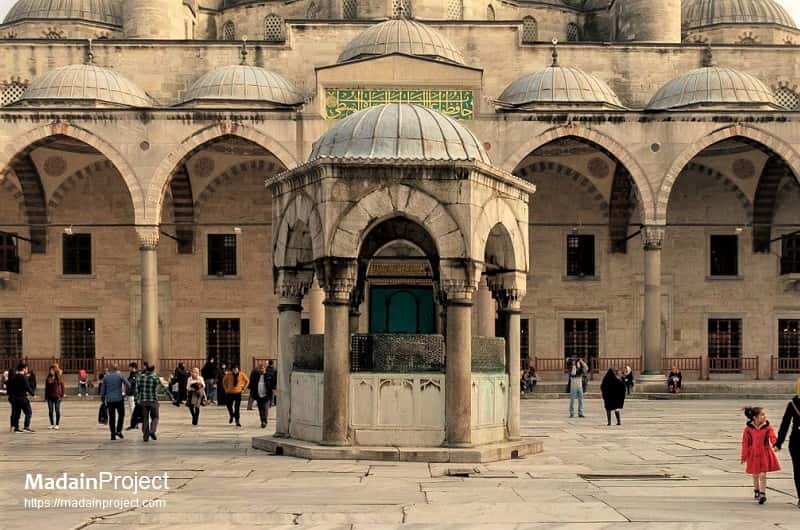 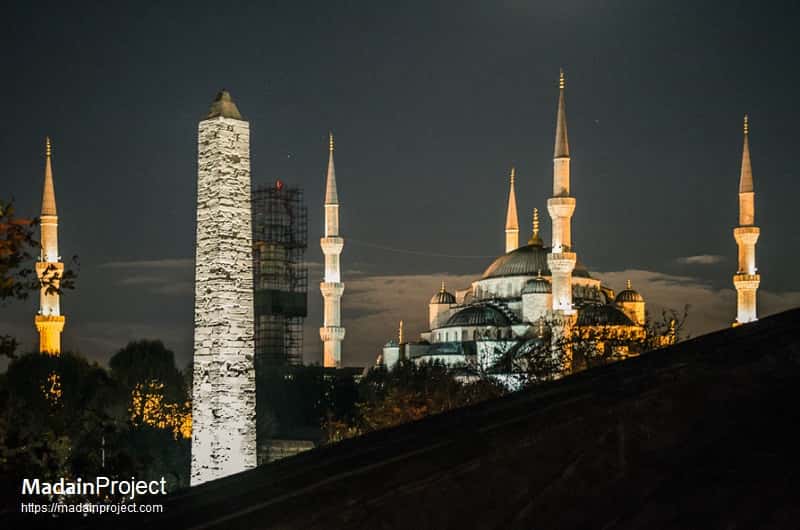 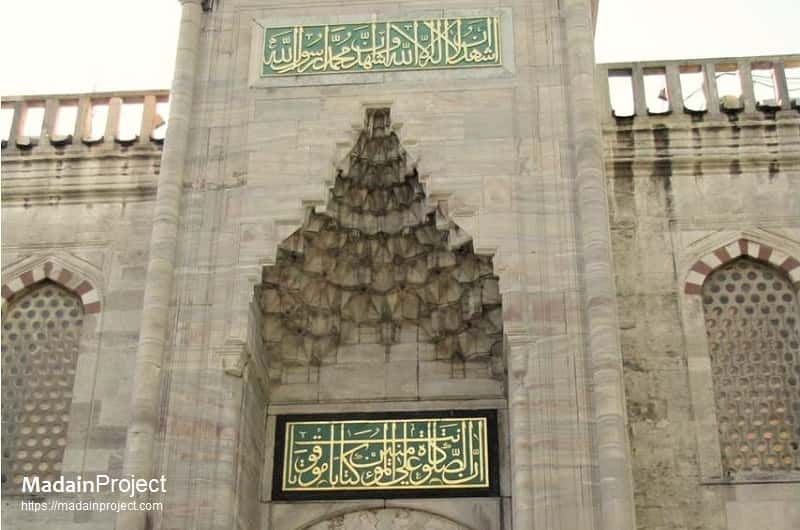 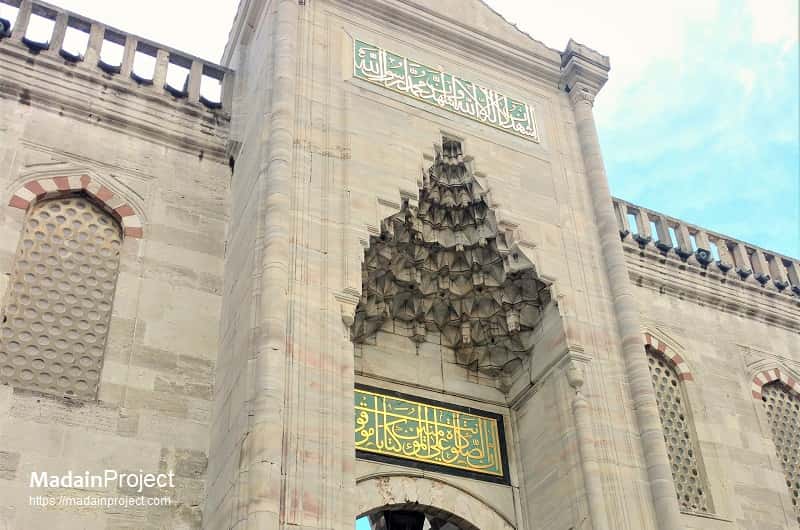 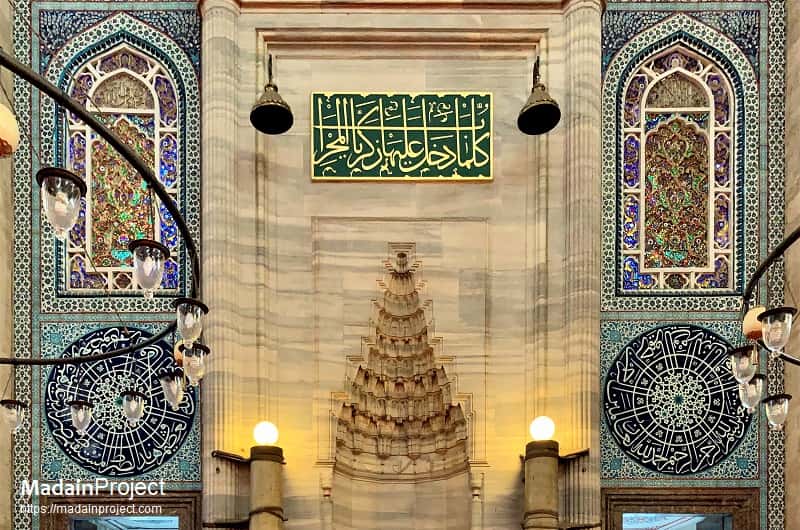 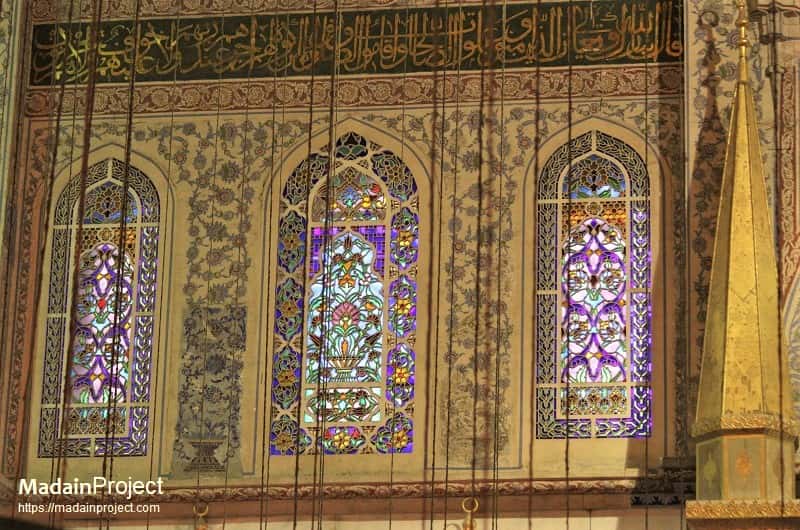 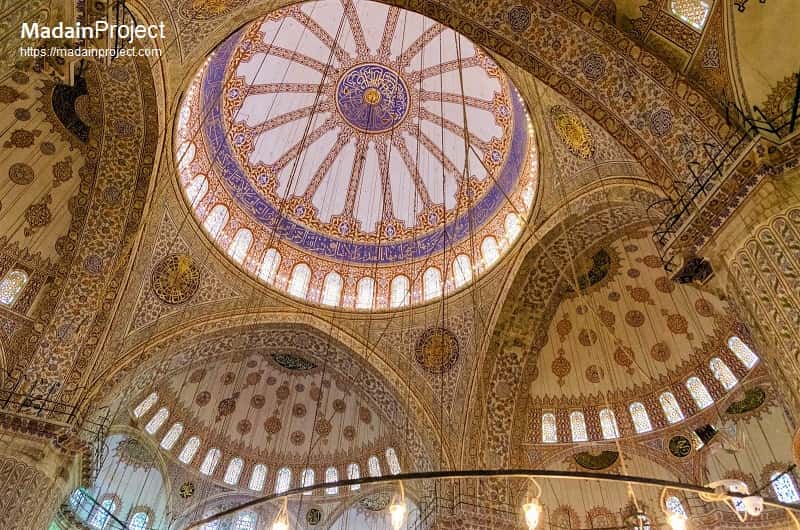