There are a number of known passages, holes, tunnels and chambers inside the Giza Spinx. Some are of known origin but others are not. These cavities were created over a period of thousands of years until very recently, by the people re-carving the giant Sphinx of Giza, treasure hunters and others.

A number of shafts or tunnels are known to exist within or below the body of Great Sphinx at Giza. Zahi Hawass (pictured here) approaches a small square lid of a shaft (shaft C), believed to have been dug by treasure hunters at some point in antiquity. At least three other shafts, one at the top of the Sphinx's head and two on it's flanks are known to exist.

In 1998, Zahi Hawass, Chief Director of the Supreme Council of Antiquities, undertook excavations beneath the main body of the Sphinx at Giza and rediscovered access tunnels to several large, apparently natural, caves directly under the Sphinx. There was evidence of earlier ancient excavations. 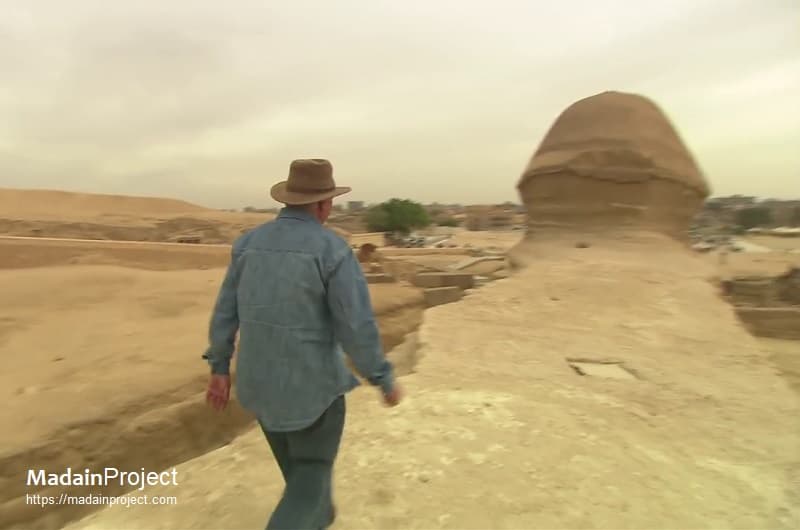 Perring's Hole
There is a hole on the back of the Sphinx, about 4 feet behind the head. It was made by Howard Vyse in the 1840s and has been dubbed Perring's Hole after his engineer. Seeking chambers, Vyse bored a hole 27 feet deep but the drill rod became stuck. He tried using gunpowder to remove the rod, but gave up so as not to do further damage to the Sphinx. The cavity Vyse created was cleared in 1978 by Zahi Hawass, and inside it he found a part of the Sphinx's headdress. 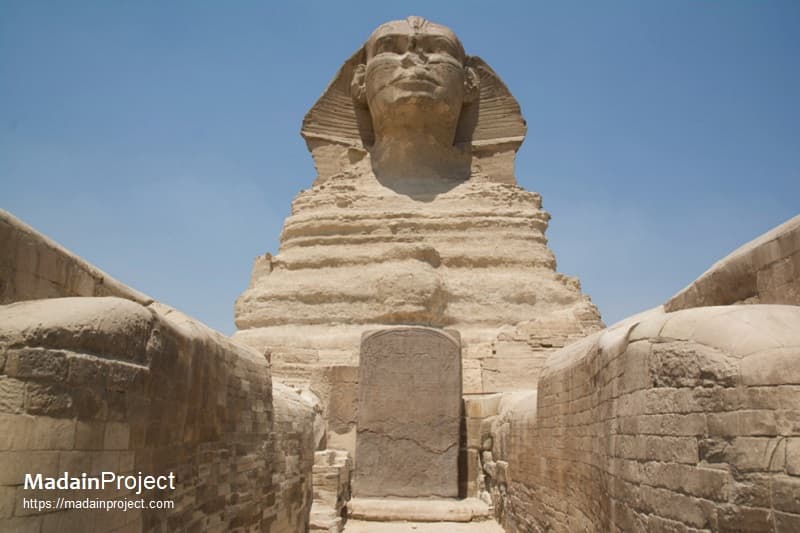 Eastern Shaft
There is an iron trap door fitted to the ground within the Sphinx's paws, between the Thutmose IV Dream Stele and the chest of the Sphinx. This is not a passage but rather a somewhat rectangular pit that was covered with a cement roof and iron beam then sealed with a trap door by Baraize as a part of his restoration efforts in the 1920s. 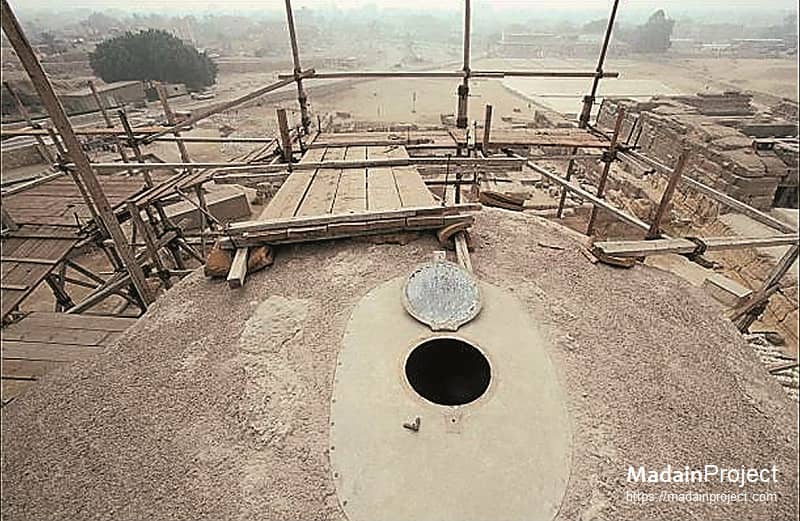 Shaft A
Baraize also paved with cement this deep hole (shaft A) on the top of the Sphinx's head. The hole measures approximately 5 feet square and nearly 6 feet deep. An iron trap door was fitted to the mouth of the hole. It has been theorized that the hole, began as a means for affixing a headdress to the sphinx in the manner of the New Kingdom (see photo below), was later deepened in search of hidden chambers. 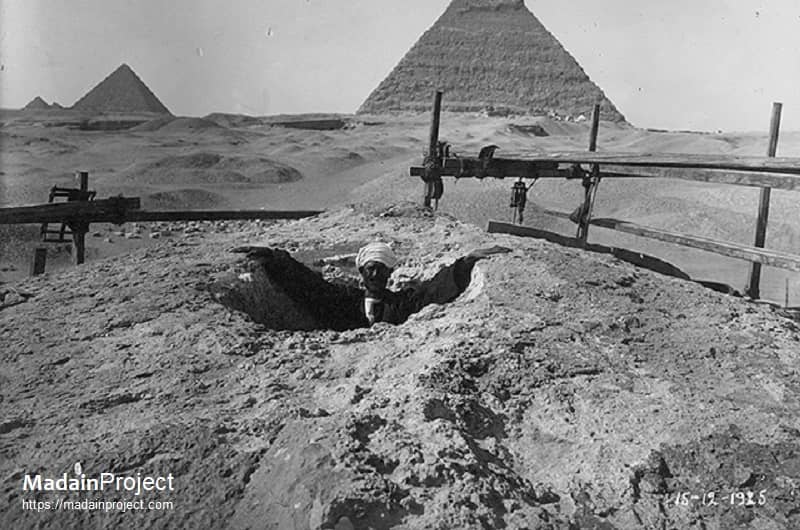 A worker stands in the hole in the head of the Giza Sphinx (shaft A), photo taken circa 1925 CE, during the excavations of Emile Baraize. Around 1798, Vivant Denon etched an image of the sphinx (inspect), although he hadn’t copied it that well. However, he no doubt knew that there was a hole on the top of its head as he had drawn an image of a man being pulled out.

Shaft C
Shaft C is located on the back of the great sphinx of Giza. It is a square shaft, with a dead-end. 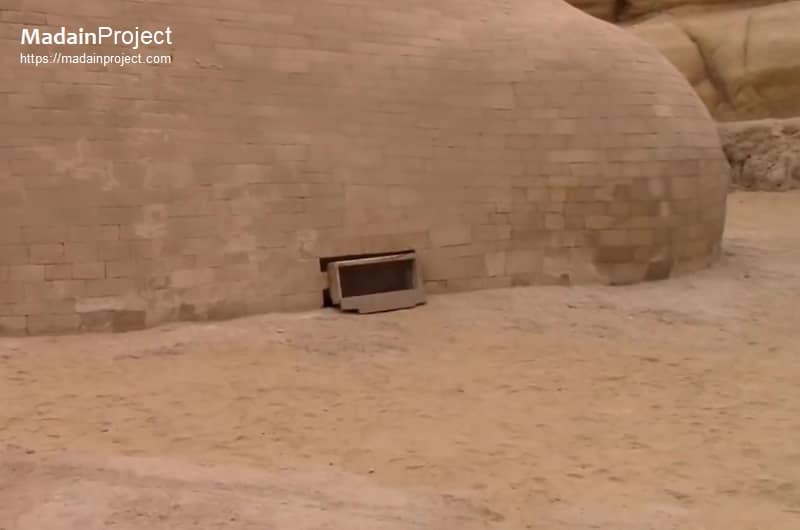 Shaft D
In 1980 Zahi Hawass and Mark Lehner opened this passage (Shaft D) on the floor level in the north-west hind part of the sphinx. This was initially reported by Mohammed Abd al-Mawgud Fayed, who had worked as a boy with the 1926 clearing of the Sphinx by Emile Baraize, engineer for the Antiquities Service. This passage descends to the water table below the sphinx. One part of the passage winds down under the Sphinx before it comes to a dead end about 4.5 meters below floor level. 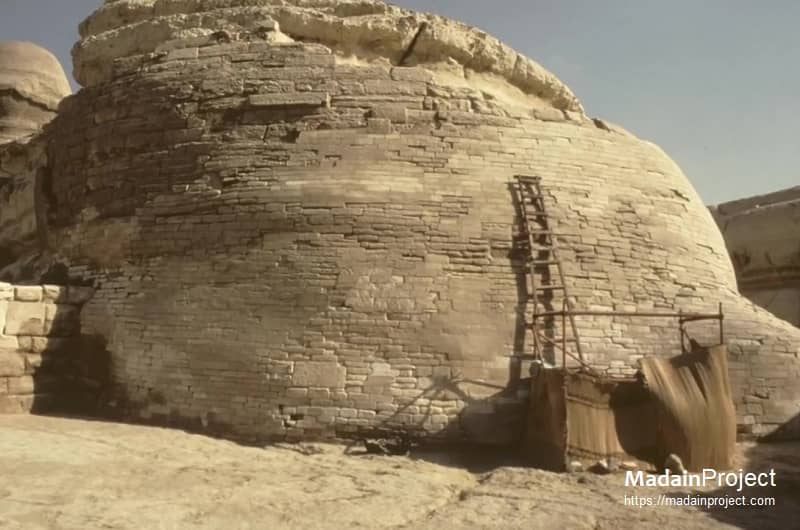 The Shaft D in the north-west passage would be a open trench in the upward curve of the rump except that it is covered by the layers of ancient restoration stones. In 1980-81, it was found that the lower part did indeed come to the water table, and just above this point the debris contained modern items - glass, cement, tin foil etc. The passage is crudely cut, its sides are not straight, but there are cup-shaped foot-holds along the sides. It looks like an exploratory shaft.

Key-hole Shaft
Another known cavity is the Shaft D, in the Giza Sphinx enclosure but not connected with the Sphinx itself. The so-called Key-hole Shaft is in the floor of the enclosure under the north ledge of the wall, just opposite the north hind paw. The passage measures about 4.5 feet by 3.5 feet and is just over 6 feet deep. A large piece of basalt, with one side finished smooth, was found inside the shaft. It is likely that the passage was meant to be a tomb but was never completed. 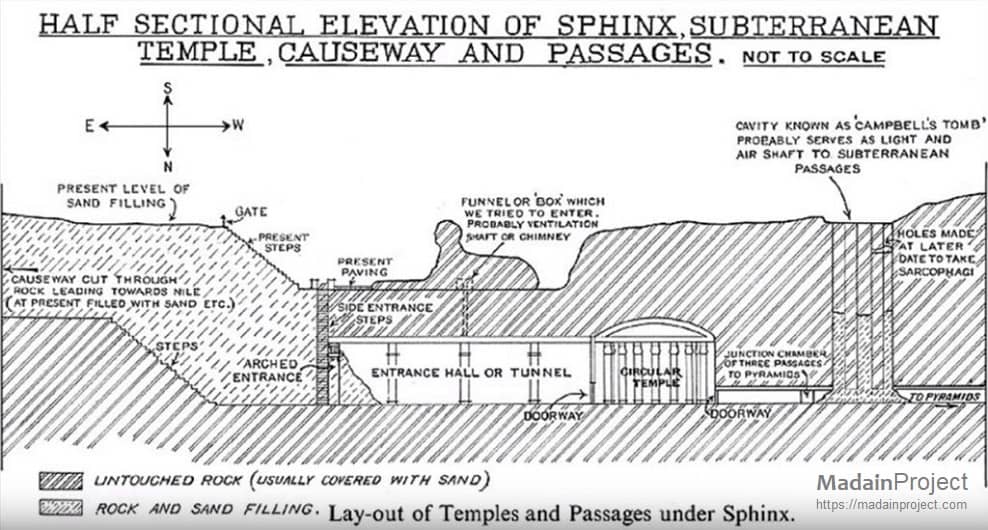 The Hall of Records is allegedly a library buried under the Great Sphinx in the Giza pyramid complex. It is rumored to house the knowledge of the Egyptians in papyrus scrolls, much as the Great Library of Alexandria housed Grecian knowledge. There is debate as to whether the Hall actually exists or not, but all excavation in the area has so far yielded little or no results.