The Southern Wall is a wall at the southern end of the Haram al-Sharif (Temple Mount) and the former southern side of the Second Temple. Herod's Royal Stoa stood atop his extension of the Temple Mount, along the southern flank.

The Southern Wall is a wall at the southern end of the Temple Mount and the former southern side of the Second Temple (also called Herod's Temple) in Jerusalem. It was built during King Herod's expansion of the Temple Mount platform southward on to the Ophel. The Southern Wall is 922 feet (281 m) in length, and which the historian Josephus equates as being equal to the length of one furlong.

The retaining southern wall is built of enormous blocks of Jerusalem stone, the face of each ashlar (block) is edged with a margin, the bossage is raised about 3/8" above the surrounding margins. The unmortared blocks are so finely fitted together that a knife blade cannot be inserted between the ashlars. 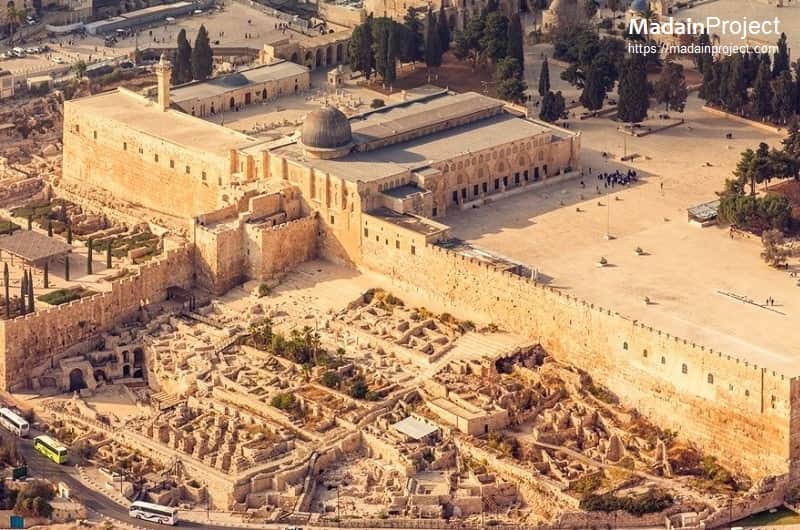 Notable Structures Along the South Wall 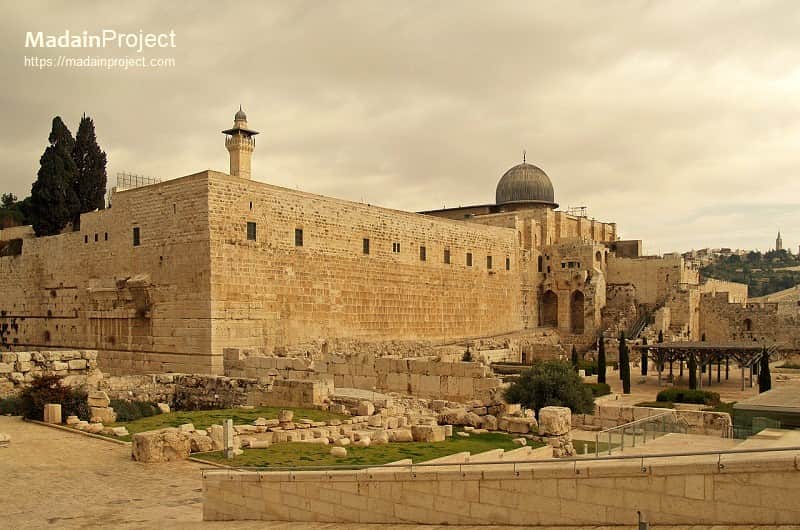 al-Aqṣā Mosque
South-west exposure of the Al-Aqsa Mosque along the southern wall of the Temple Mount (Haram al-Sharif), in the Old City of Jerusalem. Considered to be the third holiest site in Islam after Mecca and Medina. The mosque was built on top of the Temple Mount, known as Haram esh-Sharif in Islam. Muslims believe that Muhammad was transported from the Sacred Mosque in Mecca to al-Aqsa during the Night Journey. The lead dome of the mosque is also partially visible.

Ophel
The Jerusalem Ophel, looking towards the Solomon's Stables and the Southern Wall. The Ophel is part of the Eastern Hill that sits between the City of David and the Temple Mount. The word “ophel” means “swell or rise” and refers to a higher part of the landscape. The Jebusites built their citadel there, as did David, who also added a lot more fortification to this northern part of his city. 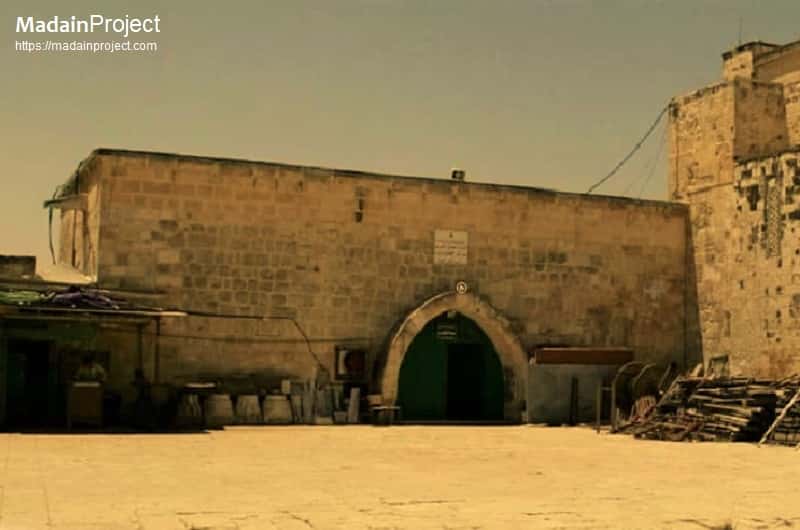 Mosque of Omar
This is believed to be the location of original mosque of Omer, initially a small wooden structure was built here, along the southern wall of Haram al-Sharif (Temple Mount) and eastern wall of al-Aqsa.

Umayyad Palace
The remains of an Umayyad era Palace was discovered in the south-western area of the Temple Mount. It was obviously the seat of the Umayyad caliph whenever he visited Jerusalem. This palace measures 96 x 84 m. and is surrounded by a three meter-thick protective wall. pparently constructed during the reign of the Umayyad caliph El-Walid I (705-715) and is similar to other fortified Umayyad palaces on the fringe of the desert in Transjordan and Syria.

Southern Fortification
Interior of the southern tower (believed to the built by Fatimids) provided direct access to the Haram al-Sharif area from the residential and adminstrative area along the southern wall. The lower part of this Fatimid era tower is where now the Library al-Khatuniyya is located. Probably established by Salahuddin al-Ayubi and has remained in use ever since.

Hadrian's Inscription
Hadrian's inscription, the upside down inscription is from the Roman statue of Emperor Antoninus Pius (138-161 CE) that the Bordeaux Pilgrim recorded seeing when he was on the Temple Mount in 333 CE. The statue was destroyed by the Byzantine Christians after 333 CE, the Jews in 614 CE. This reused block is the only part found so far of the two statues (one of Hadrian, and this one of Antoninus Pius).

Huldah Gates
The Huldah Gates, are the two sets of now-blocked gates in the Southern Wall of the Temple Mount. The western set is a double arched, and the eastern is a triple arched gate. Other than two Huldah gates there's another crusader era gate, which is now blocked. Today the double (western) Huldah Gates form the basement of the Masjid al-Aqsa, known as al-Aqsa al-Qadeemi (the old al-Aqsa) and triple (eastern) Gates form part of the Masjid al-Marwani. 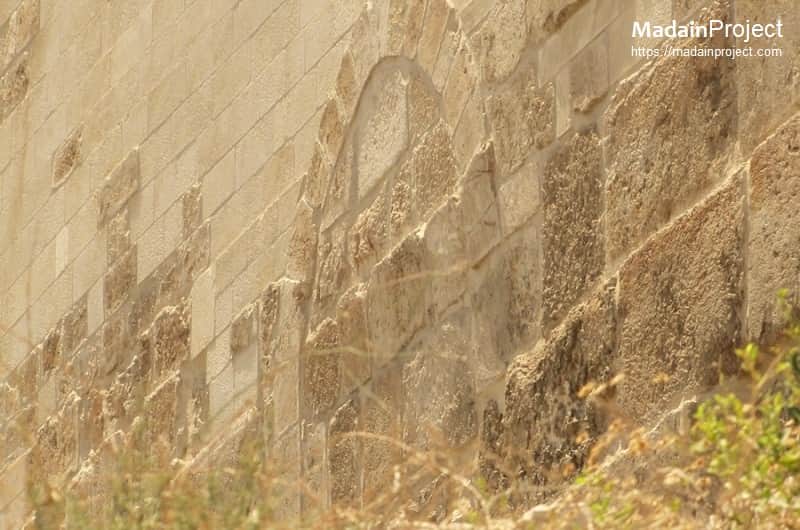 Single Gate
The crusader era gate (now walled up), was cut by the Knights Templar and is not original to the Temple Mount. The Crusaders used this gate to access the caverns below the Temple Mount, where they kept their horses. The gate was blocked shut by Saladin in 1187 when the Muslims returned. Also known as the Single Gate, it was repaired by the Mamelukes. It can be seen at the southern end of the sixth row of pillars, from the east, and the Triple Gate is at the south end of the twelfth row; it is clearly visible from outside the wall.

al-Aqsa Mosque Library
The al-Aqsa Mosque Library, originally it was built by crusaders as an annex building and later it was converted in to a small prayer area after Salah al-Din. It was called White mosque due to the colour of the stone used, it was majorly used by women. Recently it was converted in to a Library. The Women's Mosque is divided into three sections: the first one is attached to the Islamic Museum, the second is in the center, where the main library is located, and the third is adjacent to the al-Aqsa mosque.

al-Fakhariyya Minaret
The al-Fakhariyya minaret is located on the sout-west corner of Masjid il-Aqsa. It was built under the supervision of Sharif al-Din Abd al-Rahman on the orders of

South Steps
An enormous flight of steps leads to the Southern Wall from the south. The 210 feet wide southern stairs are a combination of smooth stone slabs and carved bedrock and alternate between a 35 inch run (the length of the step) and a 12 inch run, except for the first and last three steps, which are all 12 inches. These stairs led the pilgrims to the southern Temple Gates which led to the underground tunnels eventually emerging on to the surface of the Temple platform.

Prayer Niche of David
Located near the south-eastern corner of the Haram it is known as the Mehrab e Daud (King David). It was renewed in the Fatimid era - during the reign of the Caliph al-Zaher to the glory of the religion of Allah - and was renewed again during the reign of the Mamluk Sultan Hossamuddin Lajjin. It is a large mehrab, without any ornamentations, built in to the souther wall of Haram al-Sharif (Temple Mount).

Cradle of Jesus
The cradle of Jesus is a stone alcove in the floor in the south-eastern corner of the court at the entrance to Solomon’s Stables. The name "Jesus' Cradle" indicates that this location was considered holy by the Christians and it is possible that here stood a church.