The southern tetrapylon in Jerash is located at the central intersection of the Cardo maximus and the southern Decumanus (main road running east-west). A tetrapylon (Greek: τετράπυλον, "four gates"), plural tetrapyla, known in Latin as a "quadrifrons" (literally "four fronts"), is a type of ancient Roman monument of cubic shape, with a gate on each of the four sides: generally it was built on a crossroads.

Since the end of the 2nd century CE, this structure marked the crossroads of the Cardo Maximus and the South Decumanus. The latter was a major street running east to west. This intersection was the heart of the Greco-Roman city. It was the most important junction of the ancient Roman city of Jerash, the street of columns, in the exuberant Corinthian style, that ran from North to South, connecting with streets that passed through East to West, all linked in at the South Tetrapylon, an ornamental construction at their junction through which trade flowed from the Orient to the cities of the Mediterranean and beyond. 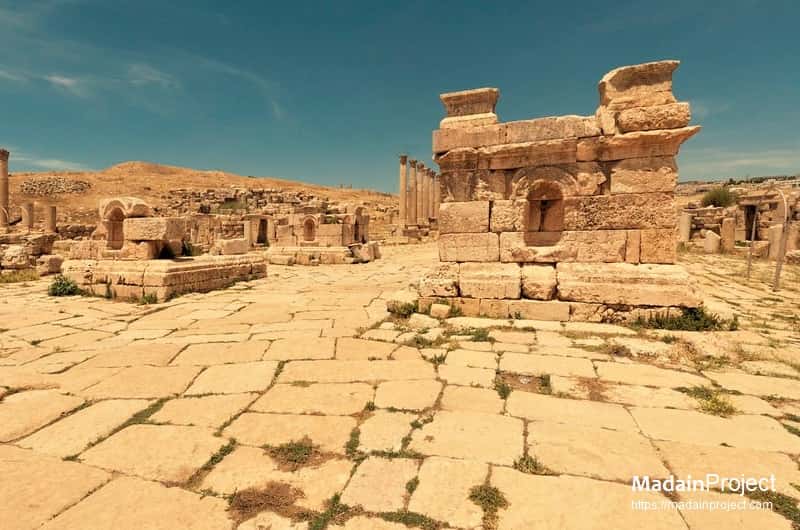 The southern tetrapylon was a tetrakionion: a special type of tetrapylon in which the central crossing is not roofed. The four corner-markers still exist as four separate basement supporting four columns covered by a plane surface decorated with statues. It is one of two Tetrapyla in Jerash

The semicircular niche (inspect) crowned with a seashell relief, is a unique architectural motif often seen at Jerash. During the Greco-Roman period, the scallop was a very common design element. It typically signified fertility and was associated with either Aphrodite, the Greek goddess of love and beauty, or with Venus who was the equivalent Roman deity.

Once the Cardo and Decumanus of Jerash were lined with shops that stocked goods of the finest craftsmanship from the four corners of the world during antiquity. Pompey’s conquest of Jordan, Syria and Palestine in 63 BCE inaugurated a period of Roman control which would last four centuries. In northern Jordan, the Greek cities of Philadelphia (Amman), Gerasa (Jerash), Gadara (Umm Qais), Pella and Arbila (Irbid) joined with other cities in Palestine and southern Syria to form the Decapolis League, a fabled confederation linked by bonds of economic and cultural interest.