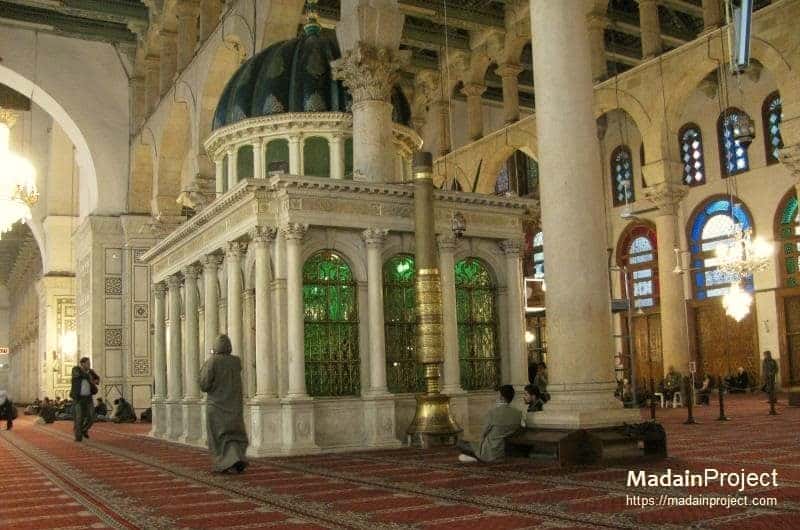 John is honored as a prophet in Islam as Yahya ibn Zakariya (يحيى بن زكريا). He is believed by Muslims to have been a witness to the word of God, & a prophet who would herald the coming of Jesus. Islamic tradition maintains that John was one of the prophets whom Muhammad met on the night of the Mi'raj, his ascension through the Seven Heavens. The son of Zechariah is a figure of prime importance in the history of Christianity, for he was the Precursor who prepared the way for Christ. John’s life, wholly dedicated to God, was crowned by martyrdom.

According to Al-Suyuti, Ibrahim stated that since the creation of the world the Heavens and the Earth wept only for two people: John the Baptist and Husayn ibn Ali. In Islam, the Prophet Yahya is an exemplar of righteousness, kindness and piety. Sufi commentaries emphasize his divinely-given wisdom (19:12)—which he received as a child. In the Qur’an, the Prophet Yahya is “a prophet from among the righteous” (6:85 & 3:39).

According to Christian tradition, (legend had it that) Saint John's head was buried there. Ibn al-Faqih relays the story that during the construction of the mosque, workers found a cave-chapel which had a box containing the head of St. John the Baptist, or Yaḥyā ibn Zakarīyā in Islam. Upon learning of that and examining it, al-Walid I ordered the head buried under a specific pillar in the mosque that was later inlaid with marble.

In 2001 Pope John Paul II visited the mosque, primarily to visit the relics of John the Baptist. It was the first time a pope paid a visit to a mosque. Similar to the account of John the Baptist in the Bible, the birth of the Prophet Yahya in the Qur’an is miraculous, since Zechariah and his wife were unable to conceive together—before Zechariah’s desperate prayers for a child were answered.

The mosque's extensive mosaics and its marble panelling were once again ravaged by fire in 1893, and had to be restored. The fire also destroyed the inner fabric of the prayer hall and caused the collapse of the mosque's central dome. A laborer engaging in repair work accidentally started the fire when he was smoking his nargila (water pipe). The Ottomans fully restored the mosque, but largely maintained the original structure.