The 'Roman Structures in Jerusalem' refers to the buildings/structures constructed or rebuilt after the circa 63 BCE caputre of Jerusalem by the Romans under the command of Pompeii. These could be new structures, rebuilt or renovated in the Roman architectural style, with Roman construction technology and/or have Roman architectural influence. The Romans ruled through a local client king and largely allowed free religious practice in Judaea, such as Herod the Great. Almost none of the structes remain dating back to this era.

After 70 CE siege, when much of the Jerusalem was conquered and subsequently destroyed by the future emperor Titus, the Roman Emperor Hadrian in the 2nd century CE laid out and rebuilt Jerusalem as a pagan city. Most of the remains date back to this Roman rebuilding of the city, constituting part of the old city's architectural fabric.

Most archaeologists agree that the historical layout that forms the basis of the Old City as we know today, was created, not during Jewish, Christian or Muslim rule, but during the Roman period, when the city of Aelia Capitolina was built on the ruins of Jerusalem following the destruction of the Second Temple in 70 CE. 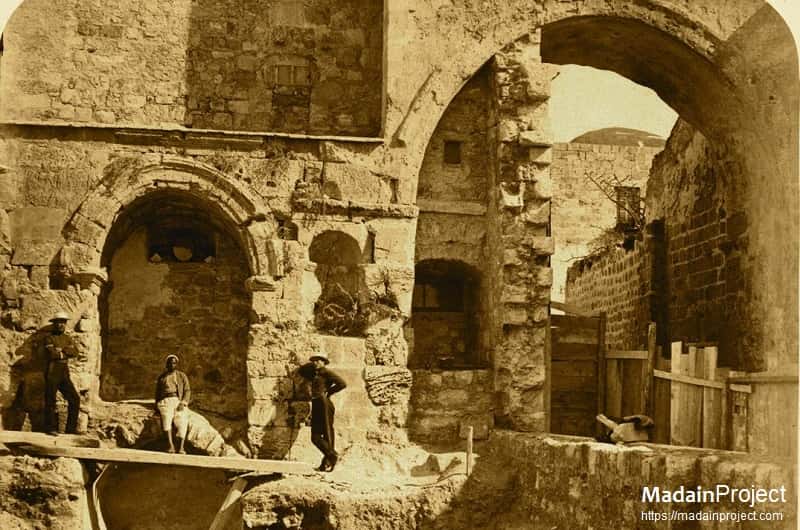 Roman Gate and Plaza
The Roman Plaza Museum remained in use during the Early Muslim and Crusader period, but several storerooms were added by the Crusaders outside the gate, so that access to the city became possible only by passing through those rooms. The gate holds religious Hellenistic meanings as well: the area of the city was sacred. The titles of the Roman town also appear on coins that defined it as “an autonomous city, holy city, and sanctuary city.”

Ecce Homo Arch
Near the Struthion Pool, Hadrian built a triple-arched gateway as an entrance to the eastern forum of Aelia Capitolina. Traditionally, this was thought to be the gate of Herod's Antonia Fortress, which itself was alleged to be the location of Jesus' trial and Pontius Pilate's Ecce homo speech as described in John 19:13. This was due in part to the 1864 discovery of a game etched on a flagstone of the pool. According to the nuns of the convent, the game was played by Roman soldiers and ended in the execution of a 'monk king'.

Roman Theatre
The remains of the Roman theatre were unearthed from more than 26 feet of rubble, which covered stones that hadn't seen the light of day in nearly 2,000 years. Initial dating of the Roman stones suggests the site was likely built during the second century CE Archaeologists concluded the structure would have been able to seat about 200 people, a relatively small number. By comparison, the Colosseum in Rome can seat an estimated 50,000 people. Archaeologists began excavations in the hopes of dating the Wilson's Arch, an ancient stone bridge that led to the Temple Mount site.

Cardo
Parts of the Jerusalem Cardo were exposed during excavation work between Habbad Street and Hayehudim Street inside the Jewish Quarter. The Cardo consisted of a central open-air passage for animals and carriages, as well as sidewalks for pedestrian use from both sides of the street. A few original stores located on the sidewalks were also found at several sections of the street. A Byzantine level was also discovered by archeologists in the southern side of the Cardo. This level contained beautiful columns which were later restored.

Gabbatha: Roman Pavement
The Roman flagstones of Hadrian’s plaza were once thought to be the Stone Pavement (Lithostrotos in Greek and Gabbatha in Aramaic) identified in John’s Gospel as the location where Jesus was condemned by Pilate. But it is more likely that Pilate judged Jesus at Herod the Great‘s palace, on the site of the modern Citadel inside the Jaffa Gate.

Asclepieion
In the 1st century BCE, natural caves to the east of the Bethesda pools were turned into small baths, as part of an asclepieion; however, the Mishnah implies that at least one of these new pools was sacred to Fortuna, the goddess of fortune, rather than Asclepius, the god of healing. In the mid 1st century CE, Herod Agrippa expanded the city walls, bringing the asclepieion into the city. When Hadrian rebuilt Jerusalem as Aelia Capitolina, he placed a roadway along the dam, and expanded the asclepieion into a large temple to Asclepius and Serapis. 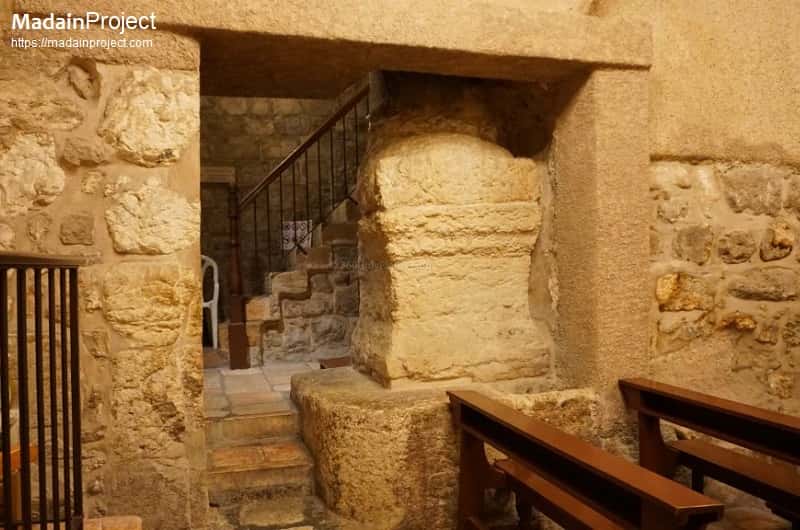 Tetrapylon Inside the Franciscans' Chapel
The current Chapels of the Franciscans, also known as the seventh station of Via Dolorosa are located at the intersection between a cross street of Aeria Capitolina (formerly Roman and Byzantine Jerusalem) and the Cardo Maximus during the time of the Roman Emperor Hadrian. The remains of the Roman tetrapylon as seen from the second chapel, the first chapel alter in behind the large stone base. Pass this column, this is the second chapel, which corresponds to the location of station 7 on Via Dolorosa.

The Kings' Game (Basileus)
The Basileus or Basilicus, also known as the Game of the Kings was a favourite pass-time activity for the Roman soldiers. A large number of such etchings are known to exist, at least three "Basilicus etchings" are known from the Roman flagstones of Ecce Homo Convent. Most of these games were played out of boredom, and to relieve the soldiers of becoming weary.