The Tomb of the Roman Soldier (قبر الجندي الروماني), also known as the Tomb of the Soldier, is a rock cut tomb in Wadi Farasa, named after the remains of a Roman styled bust of a military individual. Although predominently of Nabatean style it is (mis)named as Roman because of the stone bust wearing Roman breast armour. The Roman Soldier tomb complex lies along the road to the High Place, southeastern outskirts of the city center of Petra in the Wadi Farasa.

The facade of the Roman Soldier Tomb is similar to the Urn Tomb, including the disk decoration on its small frieze. Higher up the facade, three niches are distributed between the four columns on the front of the monument. Each niche contains a male figure (inspect), dressed in military style, hence the name. The facade of the Roman Tomb is about 14 meters. Above the columns are a frieze and a pediment. Between the four columns there are three niches, each containing an inset male stone figure made out of six limestone blocks.

Interior of the tomb holds several niches (inspect) most probably for the burial purposes and since tombs in Petra were family affairs, this tomb may have belonged to a family as well. It is most likely that the three statues in the facade depict a family portrait, with the father in the middle and his sons (or other male relatives) on either side of him. Dating no later than 75 CE, this is the most complete, and one of the richest, funerary complexes in Petra.

Because of the grand size of the tomb it is speculated that this tomb would be appropriate for a royal burial, although it is not certain who was interred here. The tomb has a single entrance from the north-east, which lies in the center of the façade. The entrance appears to have had two small carved pillars framing its doorway, although the left column has eroded away. Above this entrance is a doric entablature (inspect) with a pattern of alternating triglyphs and metopes. Directly above this is a simple pediment. The dimensions of the door to the Tomb of the Soldier measure only 1.6m in width but 3.6m in height.

Recent archaeological evidence has indicated that this well-proportioned facade was probably part of a complex that was situated in front of the tomb, providing an interesting new insight into nabataean architecture. The tomb was accessible through a large courtyard with porticos and two-story buildings on both sides and a triclinium opposite the entrance. The Tomb of the Soldier is relatively well preserved in comparison with other monumental tombs at Petra. 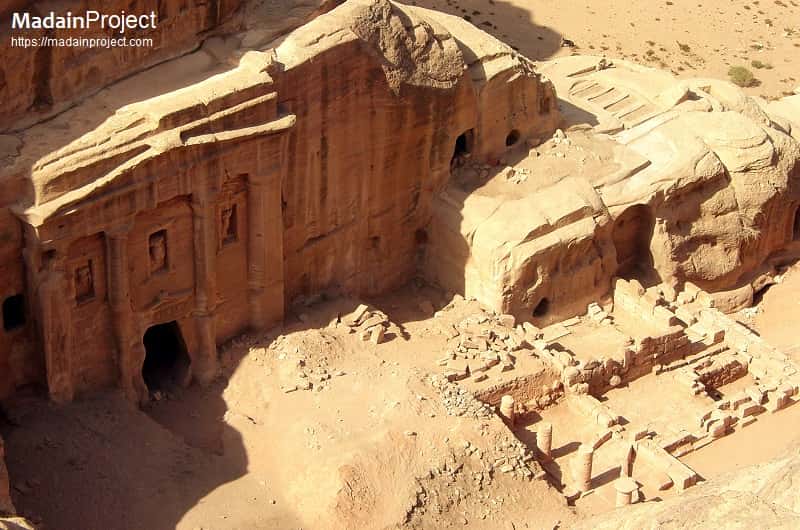