The Qasr al-Bint (قصر البنت) is a religious temple in the Nabataean city of Petra. It faces the Wadi Musa and is located to the northwest of the Great Temple and to the southwest of the Temple of the Winged Lions. The temple's modern name, "Qasr al-Bint al-Faroun, (قصر بنت الفرعون)" means "The Castle of the Daughter of Pharaoh." This relates to a local legend involving the pharaoh of the Exodus who, as the tale is told, got tired of pursuing the Israelites and eventually settled with his court here in Petra. While not historically correct in any way, these stories remain as an entertaining part of the folklore of Petra.

One of the best preserved of the ancient structures surviving in Petra today. The deity to whom the Qasr al Bint was dedicated has been a source of scholarly debate. The temple faces north towards a sacrificial altar that was dedicated to Dushara, the main Nabataean deity, and due to this spatial connection it has been suggested by some scholars that it was also Dushara who was worshiped at the Qasr al-bint. A Greek inscription in the chamber to the east of the cella suggests that Zeus Hypsistos may also have received devotions at the Qasr

Another local folktale according to which the virtuous daughter of a wicked Pharaoh determined to decide between her suitors by setting them the task of providing a water supply for her palace. Two suitors completed the task simultaneously by directing water to the palace from different springs in the hills surrounding it. The princess accepted the more modest of the two suitors who ascribed his success to God

Some scholars have even suggested that the presence in the cella of a baetyl stone fragment, which originally would have been placed on a base faced with gold, indicates that it was actually Al-Uzza, equated with the Greek goddess Aphrodite, that was worshiped here. Healey, who is considered one of the main authorities on Nabataean religion, believes that the Qasr may be the Temple to Aphrodite that is referred to in the Babatha correspondence, a cache of documents that were hidden in a cave at the time of the Bar Kokhba Revolt 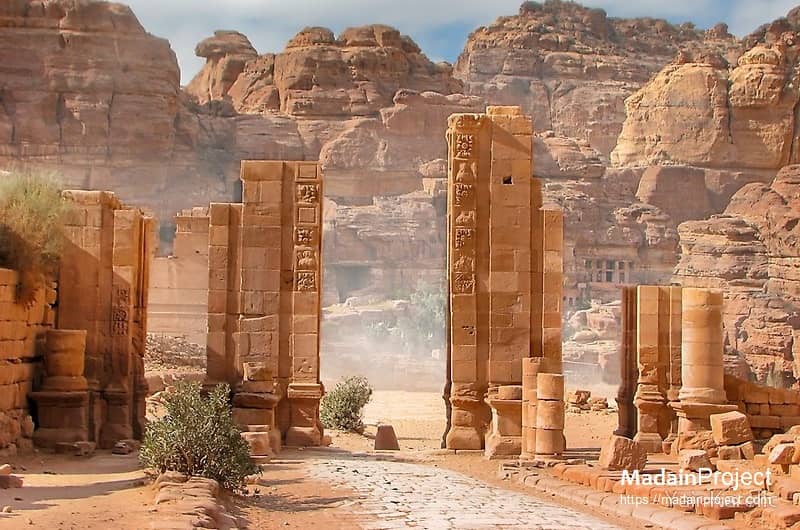 It stands near the monumental gate and was a key focal point on the colonnaded street, as well as a focus of religious worship. 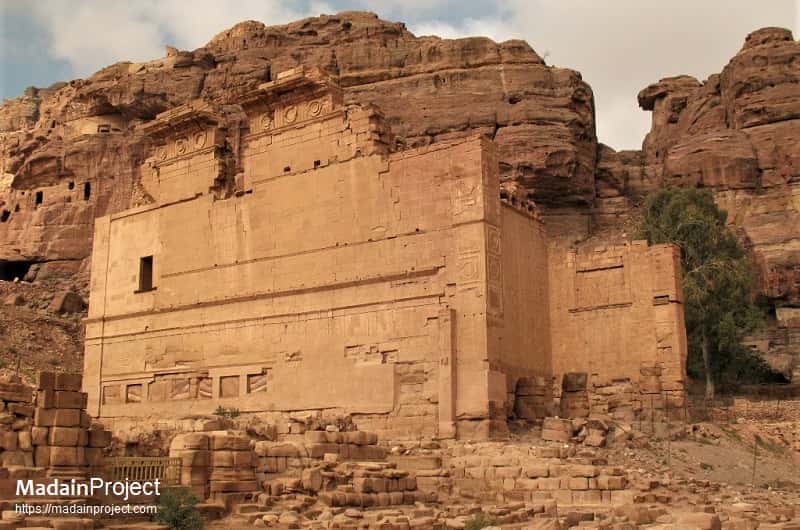 The Qasr al-Bint is one of the few ancient built-structures that remain standing in Petra. This is in spite of the fact that ashlar masonry, which was used in its construction, is vulnerable to damage by ground vibration during earthquakes. The symmetrical plan of Qasr el-Bint may have helped to reduce the moments of torsion that occurred during seismic activity at the site, however. The use of wooden string courses may also have enhanced the energy dissipation capacity of the structure. Some scholars believe that it is due to the inclusion of these wooden-string courses that the building is still standing at its full height.

The Qasr al-Bint sits upon a podium made of a rubble core retained by courses of ashlar masonry. The temple itself is also constructed of ashlar blocks. Access to the temple is provided by a monumental marble staircase of 27 steps, which is divided by a landing. The plan is square and consists of a pronaos (or vestibule), a naos (or chamber), and a tripartite adyton which contains the cella, the most sacred part of the temple. 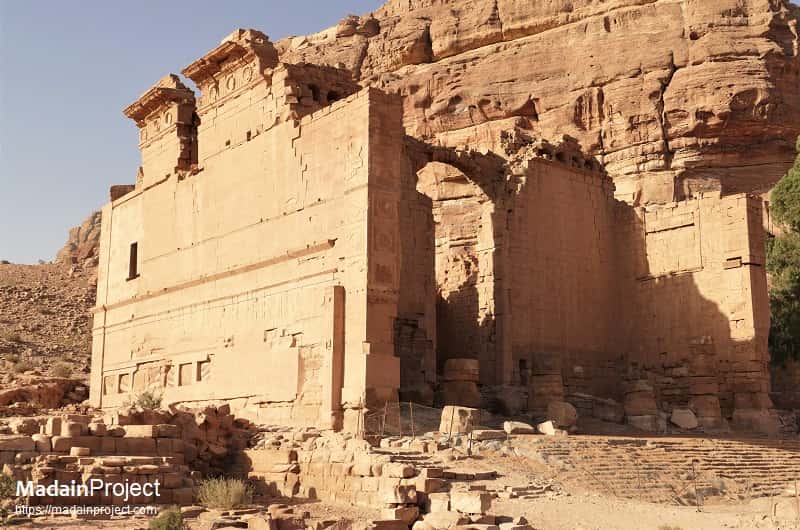 The vestibule was originally framed by four columns with Corinthian capitals. None of these columns remain standing, and only fragments (inspect) of the capitals have been found. There are additional chambers on either side of the cella. These two chambers originally had upper rooms that could be accessed by staircases concealed in the building's thick walls. Both the interior and exterior walls were originally covered in decorative plaster work, some of which is still extant. Wooden-string courses line the lengths of the walls, and wooden wedges can still be found between some of the stones. The wood used in the structure has been identified as Lebanese Cedar. 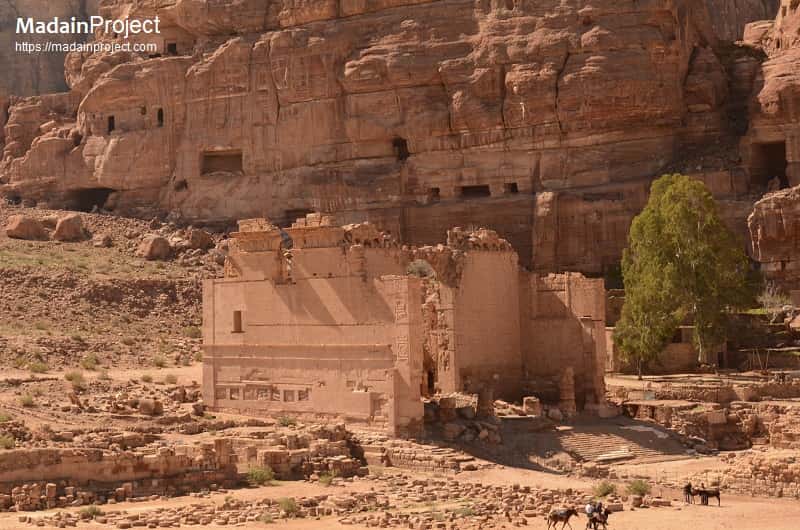 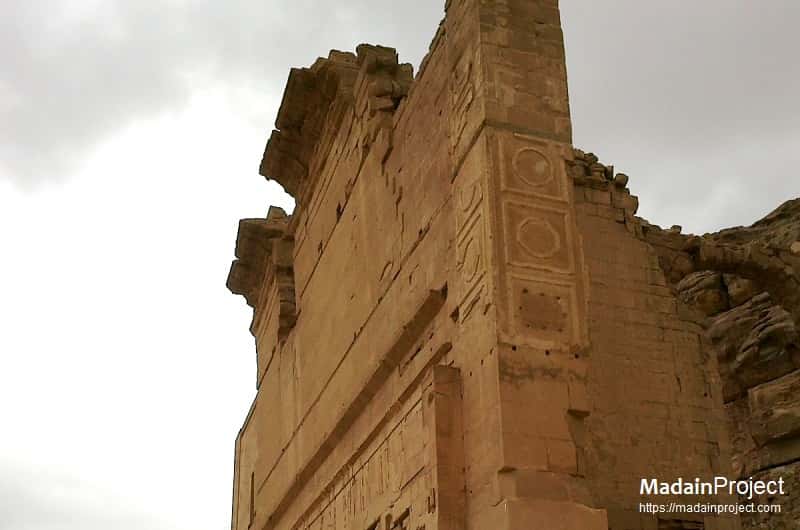 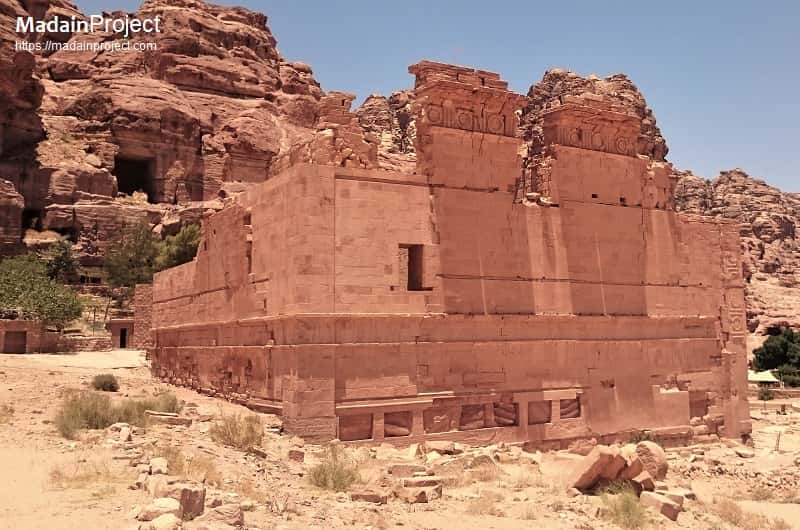 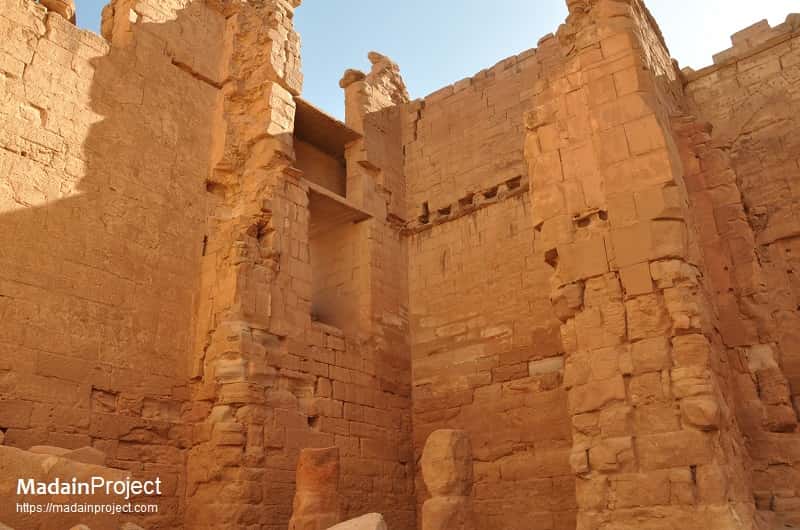 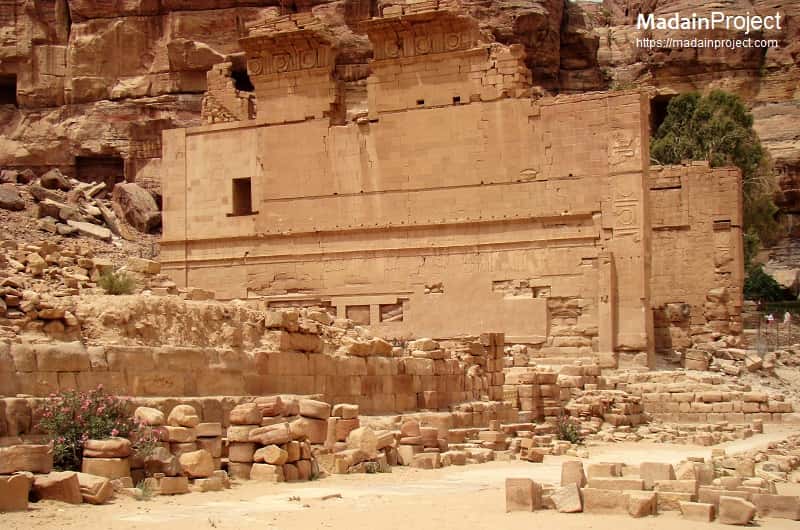