The Pyramid of Djoser (هرم زوسر), or Step Pyramid of King Djeser (الهرم المدرج للملك زوسر), kbhw-ntrw in Egyptian, is an archeological remain in the Saqqara necropolis, Egypt, northwest of the city of Memphis. The 6-tier, 4-sided structure is the earliest colossal stone building in Egypt. It was built in the 27th century BCE during the Third Dynasty for the burial of Pharaoh Djoser by his vizier, Imhotep. The pyramid is the central feature of a vast mortuary complex in an enormous courtyard surrounded by ceremonial structures and decoration.

The pyramid went through several revisions and redevelopments of the original plan. The pyramid originally stood 62.5 metres (205 ft) tall, with a base of 109 m × 121 m (358 ft × 397 ft) and was clad in polished white limestone.[5] The step pyramid (or proto-pyramid) is considered to be the earliest large-scale cut stone construction, although the nearby enclosure of Gisr el-Mudir predates the complex, and the South American pyramids at Caral are contemporary. Djoser is best known for his innovative tomb, which dominates the Saqqara landscape. 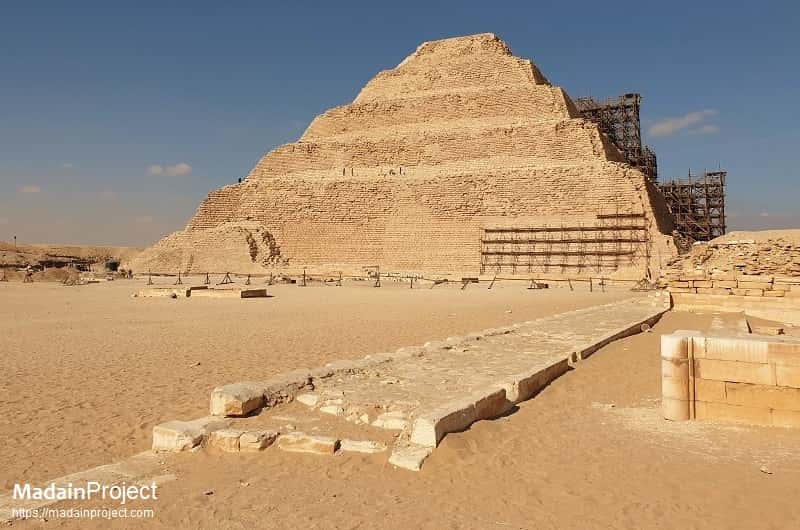 The social implications of such a large and carefully sculpted stone structure are staggering. The process of building such a structure would be far more labor-intensive than previous monuments of mud-brick. This suggests that the state, and therefore the royal government had a new level of control of resources, both material and human. Also, from this point on, kings of the Old Kingdom are buried in the North, rather than at Abydos.

Although the plan of Djoser's pyramid complex is different than later complexes, many elements persist and the step pyramid sets the stage for later pyramids of the 4th, 5th, and 6th Dynasties, including the great pyramids of Giza. Another intriguing first is the identification of the architect of the project, Imhotep, who is credited with the design and construction of the complex.

Development of Mastaba into Pyramid

The Step Pyramid of Djoser was not built all at once, but in stages. A square mastaba of about 63 meters in side-length and about 8.5 meters in height was built at first stage and then there was an addition of three meters on each side and another addition of nine menters on the eastern side, so as to link the building to eleven shafts belonging to the family of Djoser.

Courtyard
Djoser's Pyramid draws ideas from several precedents. The most relevant precedent is found at Saqqara mastaba 3038 (c. 2700 BCE). The substructure lay in a 4 m (13 ft) deep rectangular pit, and had mudbrick walls rising to 6 m (20 ft). Three sides were extended and built out to create eight shallow steps rising at an angle of 49°. This would have been an elongated step pyramid if the remaining side had not been left uncovered. In another parallel to Djoser's complex, to complete this mastaba complex a niched enclosure wall was erected.

The Pyramid-Superstructure
The superstructure of the Step Pyramid is six steps and was built in six stages, as might be expected with an experimental structure. The pyramid began as a square mastaba, which was gradually enlarged, first evenly on all four sides and later just on the east side. The mastaba was built up in two stages, first to form a four-stepped structure and then to form a six-stepped structure.

Subterranean Structure
There are several levels underneath the pyramid reaching depths of up to forty meters,where over 30,000 jars made of solid stone were found, the most important of which are made of granite, alabaster and schist. Inscriptions of King Djoser at the celebration of the Heb-Sed festival can also be found at the bottom of the pyramid, as well as unique blue and green ceramic tiles. Under the step pyramid is a labyrinth of tunneled chambers and galleries that total nearly 6 km in length and connect to a central shaft 7 m square and 28 m deep. These spaces provide room for the king's burial, the burial of family members, and the storage of goods and offerings. The entrance to the 28 m shaft was built on the north side of the pyramid, a trend that would remain throughout the Old Kingdom. The sides of the underground passages are limestone inlaid with blue faience tile to replicate reed matting. Together these chambers constitute the funerary apartment that mimicked the palace and would serve as the living place of the royal ka.

Burial Chamber
The burial chamber lies at the bottom of a shaft in the center of the Pyramid at the depth of 28 meters.

The burial chamber was a vault constructed of four courses of well-dressed granite. It had one opening, which was sealed with a 3.5 ton block after the burial. No body was recovered as the tomb had been extensively robbed. Lauer believes that a burial chamber of alabaster existed before the one of granite. He found interesting evidence of limestone blocks with five pointed stars in low relief that were likely on the ceiling, indicating the first occurrence of what would become a tradition.