Palmyra, Tadmor (تَدْمُر) is an ancient Semitic city in present-day Homs Governorate, Syria. Archaeological finds date back to the Neolithic period, and documents first mention the city in the early second millennium BCE.

The city grew wealthy from trade caravans; the Palmyrenes became renowned as merchants who established colonies along the Silk Road and operated throughout the Roman Empire. By the third century CE Palmyra had become a prosperous regional center. It reached the apex of its power in the 260s, when the Palmyrene King Odaenathus defeated Persian Emperor Shapur I.

Tower of Elahbel
The Tower of Elahbel (also known as Tower 13, or Kubbet el 'Arus) was a four-storey sandstone tower tomb near the ancient city of Palmyra in Syria. The tower was one of several built outside the city walls of Palmyra, in an area known as the Valley of the Tombs. The tower was important in the history of textiles: fragments of very early Chinese silk yarns, dated to the 1st century CE, were discovered in the tombs at the tower. 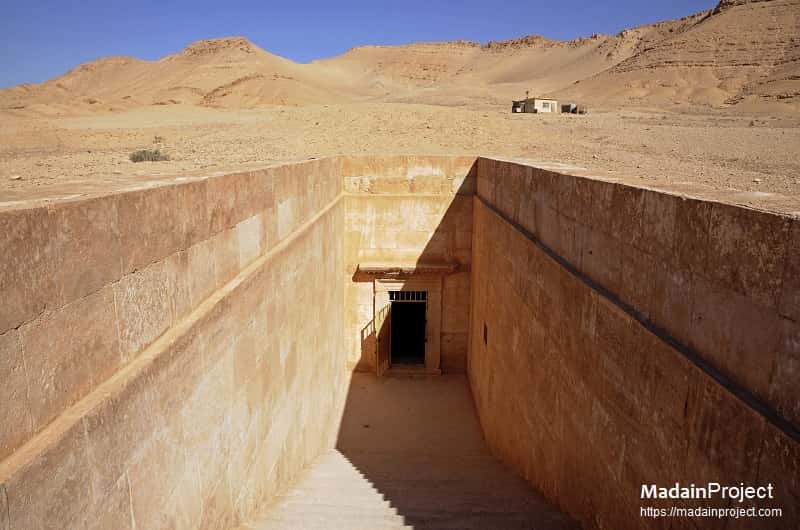 Hypogeum of Three Brothers
The Tomb or Hypogeum of the Three Brothers is one of the better known and popular burial sites of Palmyra. It is located in the Southwestern Necropolis near the Efqa Spring. The hypogeum was built in the mid-second century and was restored in 1947. Above the tomb’s entrance is an inscription that gives us the names of three brothers; Male, Saadi and Naamain. The inscription also states that other families co-owned parts of the hypogeum.

Senate
Palmyra's senate was an example; although Palmyrene texts written in Greek described it as a "boule" (a Greek institution), the senate was a gathering of non-elected tribal elders (a Near-Eastern assembly tradition). The senate building is largely in ruins. It is a small building that consists of a peristyle courtyard and a chamber that has an apse at one end and rows of seats around it.

Tetrapylon
The Tetrapylon was erected during the renovations of Diocletian at the end of the third century. is a square platform and each corner contains a grouping of four columns. Each column group supports a 150 tons cornice and contains a pedestal in its center that originally carried a statue. Out of sixteen columns, only one is original while the rest are from reconstruction work by the Syrian Directorate-General of Antiquities in 1963, using concrete. The original columns were brought from Egypt and carved out of pink granite.

Roman Theatre
The Roman Theatre at Palmyra (مسرح تدمر) is a Roman theatre in ancient Palmyra in the Syrian Desert. The unfinished theatre dates back to the second-century CE Severan period. The theatre's remains have since been restored. The second-century CE theatre was built in the center of a semicircular colonnaded piazza which opens up to the South Gate of Palmyra. In the 1950s the theatre was cleared from the sand and subsequently underwent restoration works.

Temple of Bel
The Temple of Bel was dedicated in CE 32; it consisted of a large precinct lined by porticos; it had a rectangular shape and was oriented north-south. The exterior wall was 205-metre (673 ft) long with a propylaea, and the cella stood on a podium in the middle of the enclosure.

Agora
The Agora of Palmyra is part of a complex that also includes the tariff court and the triclinium, built in the second half of the first century CE. The agora is a massive 71 by 84 metres (233 by 276 ft) structure with 11 entrances. Inside the agora, 200 columnar bases that used to hold statues of prominent citizens were found. The inscriptions on the bases allowed an understanding of the order by which the statues were grouped; the eastern side was reserved for senators, the northern side for Palmyrene officials, the western side for soldiers and the southern side for caravan chiefs.

Palmyra Castle
Palmyra Castle, also known as Fakhr-al-Din al-Ma'ani Castle (قلعة فخر الدين المعني) or Tadmur Castle, is a castle overlooking Palmyra in the province of Homs, Syria. The castle is thought to have been built by the Mamluks in the 13th century on a high hill overlooking the historic site of Palmyra, and is named for the Druze emir Fakhr-al-Din II, who extended the Druze domains to the region of Palmyra during the 16th century.

Great Colonnade
The Great Colonnade at Palmyra was the main colonnaded avenue in the ancient city of Palmyra in the Syrian Desert. The colonnade was built in several stages during the second and third century CE and stretched for more than a kilometer (approximately .75 miles). It linked the Temple of Bel, in the southeastern end of the city, to the West Gate and the Funerary Temple in the northwestern part. The colonnade's early columns, especially in the western stretch, were built using the classical opus emplectum building technique. The columns consisted of six to eight short sections.

Baths of Diocletian
Much of the Baths of Diocletian are ruined and do not survive above the level of the foundations. The complex's entrance is marked by four massive Egyptian granite columns. Inside, the outline of a bathing pool surrounded by a colonnade of Corinthian columns is still visible in addition to an octagonal room that served as a dressing room containing a drain in its center.

Baalshamin Temple
The Temple of Baalshamin dates to the late 2nd century BCE in its earliest phases; its altar was built in CE 115, and it was substantially rebuilt in CE 131. It consisted of a central cella and two colonnaded courtyards north and south of the central structure. A vestibule consisting of six columns preceded the cella which had its side walls decorated with pilasters in Corinthian order.

Funerary Temple
The Funerary Temple no. 86 (also known as the House Tomb) is located at the western end of the Great Colonnade. It was built in the third century CE and has a portico of six columns and vine patterns carvings. Inside the chamber, steps leads down to a vault crypt. The shrine might have been connected to the royal family as it is the only tomb inside the city's walls.