The Ottoman Prayer Hall of Masjid Nabawi (الجزء العثماني من مسجد النبوي) or the Ottoman prayer hall, also known as the Old Masjid al-Nabawi (المسجد النبوي القديم), is the remnant of the Ottoman era building of Masjid an-Nabawi. Today it is the smallest but most adorned and significant part of the Prophet's Mosque. It dates back to the time of Sultan Abdulmajid I.

Since the Ottoman Prayer Hall (identify) is the oldest part of the mosque and occupies the area of the original structure; it includes the tomb of prophet Muhammad, Rawdah Ridwan ul-Jannah, Mehrab Uthmani, Mehrab Suleimani, and Dikkat ul-Tahajjud. This section also includes the Green Dome, only remaining Ottoman era minaret. This area is fully roofed with domes and can be accessed through first courtyard from north, through Bab as-Salam, Bab abi Bakr and Bab al-Rehmah in the west and Bab al-Baqi, Bab Jibrael and Bab an-Nisa in the east. 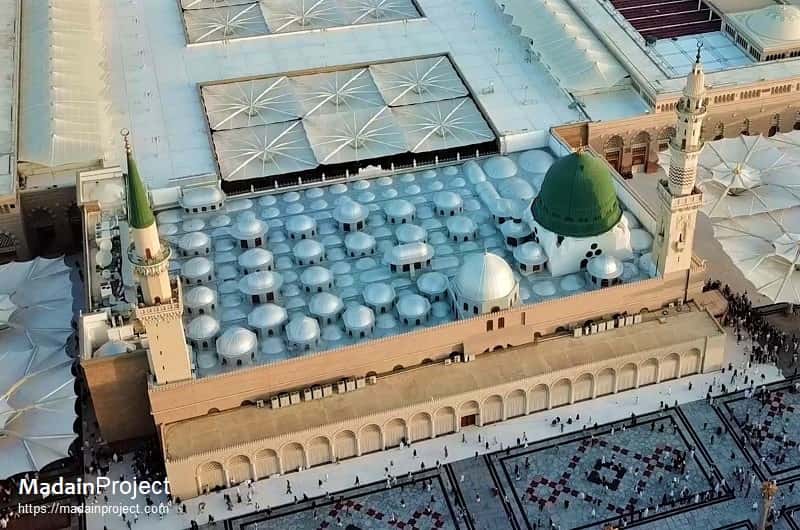 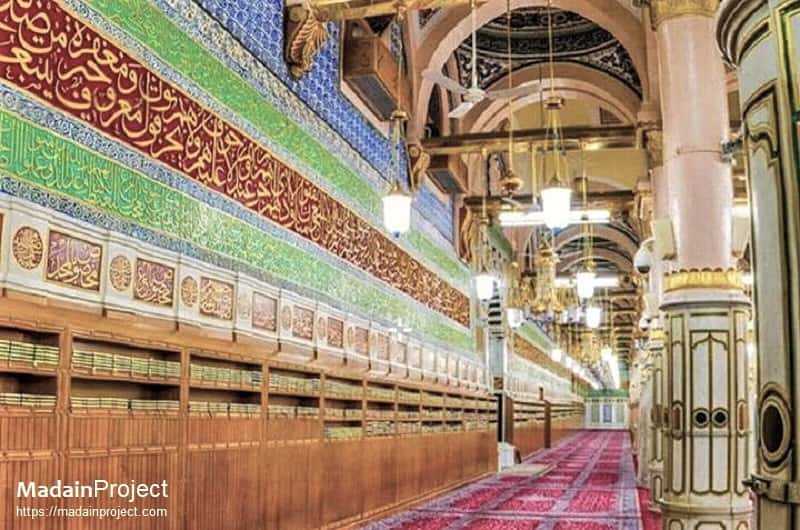 Qibla Wall
The Qibla wall, the northern most wall of the mosque complex, is the most adorned wall of Masjid an-Nabawi and dates back to late 1840s reconstruction and expansion of the prophet's mosque by Ottoman Sultan Abdulmajid I. The Qibla wall is adorned with some 185 names of prophet Muhammad. Other inscriptions and calligraphy includes the verses from Quran, a few Hadiths etc. 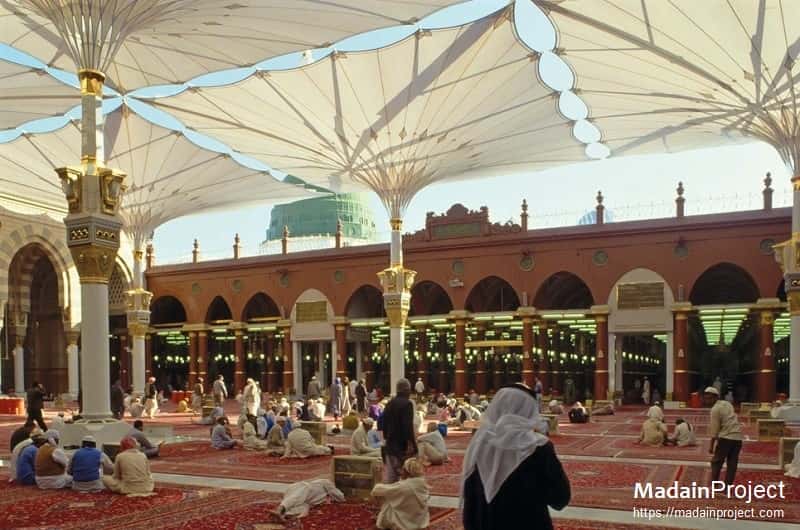 Inner Facade
The interior facade of the Ottoman era building from the first courtyard (حصورة الاولى) of Masjid an-Nabawi. This courtyard belongs to the first Saudi expansion. The facade and the upper parts of the Ottoman era structure were painted meroon, which were recently repainted baige to match the newer color of the Saudi expansion. This area belongs to the last Ottoman expansion and reconstruction which took place during the time of Sultan Abdulmajid I, and was completed in about 13 years.

Exterior
The Ottoman prayer hall is topped with about 170 domes of varying sizes. The largest of these domes is the Green Dome over the tomb of prophet Muhammad, and a smaller silver dome over the Mehrab Uthmani, the current functional dome. This section is topped with two minarets one on the south-western corner is from Ottoman era and has typical conical top of Ottoman architecture.

Tomb of Prophet Muhammad
The tomb of prophet Muhammad, known in Arabic as the Rawdah Sharifah (الروضة الشريفة), is the most important part of Masjid an-Nabawi. It is where prophet Muhammad is buried along with two of his companions, first and second caliphs Abu Bakr and Umar ibn al-Khattab respectively. 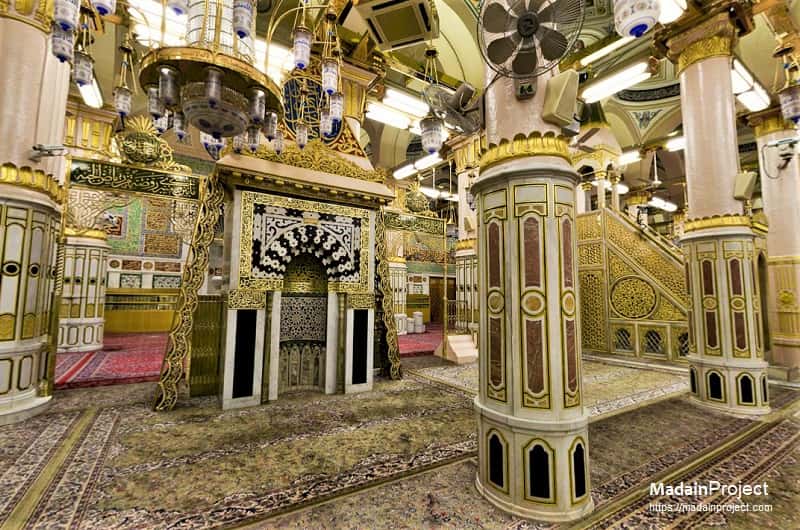 Rawdah Ridwan ul-Jannah
The Rawdah Ridwan ul-Jannah, the Riyadhul Jannah, the Rawdahtul Riyad ul-Jannah lies at the heart of the Masjid Nabawi. It extends from prophet Muhammad's tomb to his pulpit (minbar). green carpet distinguishes the area from the rest of the mosque, which is covered in a red carpet. Pilgrims attempt to visit the confines of the area, for there is a tradition that supplications and prayers uttered here are never rejected. Access into the area is not always possible, especially during the Hajj season, as the space can only accommodate a few hundred people. 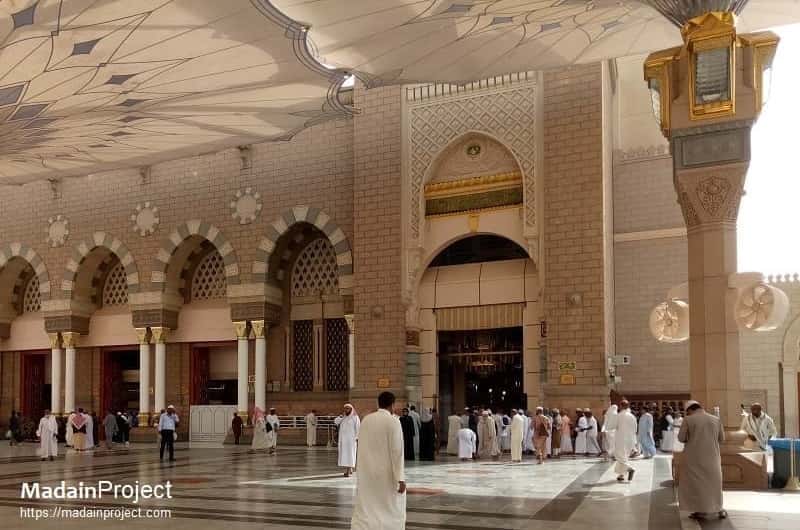 Western Gates
There are three gates that provide entry in to the oldest part of Masjid an-Nabawi from the west. These three gates, from south-north, are the Bab as-Salam, the Bab abi-Bakr and the Bab ul-Rahmah. Out of the three gates in the eastern flank; the Bab Salam is the most notable and magnificient gate of Masjid an-Nabawi. It is located on the south-western corner of the Ottoman prayer hall, directly inline with the Bab al-Baqi. Current external facade dates back to first Saudi expansion, but the gate's inner sections date back to as far back as mid-ninteenth century CE, to the time of Sultan Abdulmajid I. 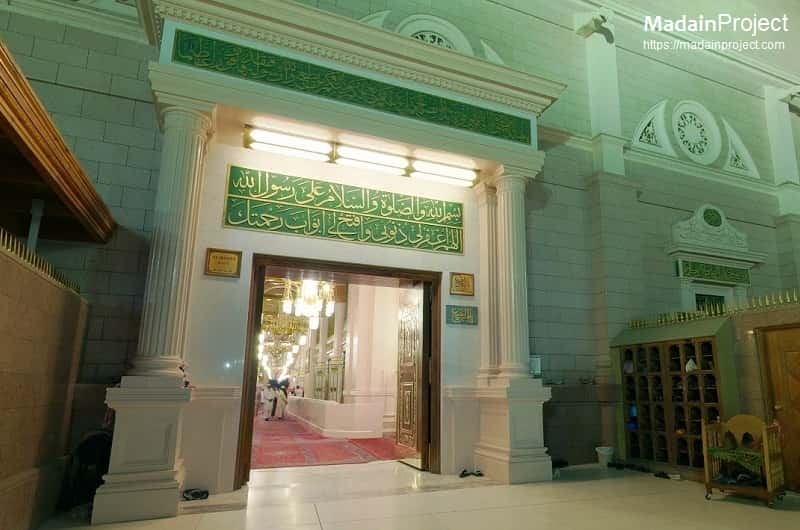 Eastern Gates
The three gates on the eastern side, from south to north, are Bab al-Baqi', Bab Jibrael and Bab an-Nissa. The last lesser known gate is located in the southern wall, which is used by the Imams to enter and exit the mosque.