The Obelisk Tomb (مدفن المسلات) was constructed in the first century BCE in Petra. It is an elaborate two story tomb carved from the solid rock. Its facade is an elaborate mixture of Egyptian, Greek, Indian and Nabataean architectural styles. Obelisk Tomb is towered by four obelisks and hence it got its name.

The Obelisk Tomb, which was carved by the Nabataeans in the 1st century CE. Above the tomb are four pyramids (‘nafesh’) as well as a niche with a statue in bas-relief that is a symbolic representation of the five people buried there.

The obelisk tomb, is one of the very few multi-story tombs in Petra. 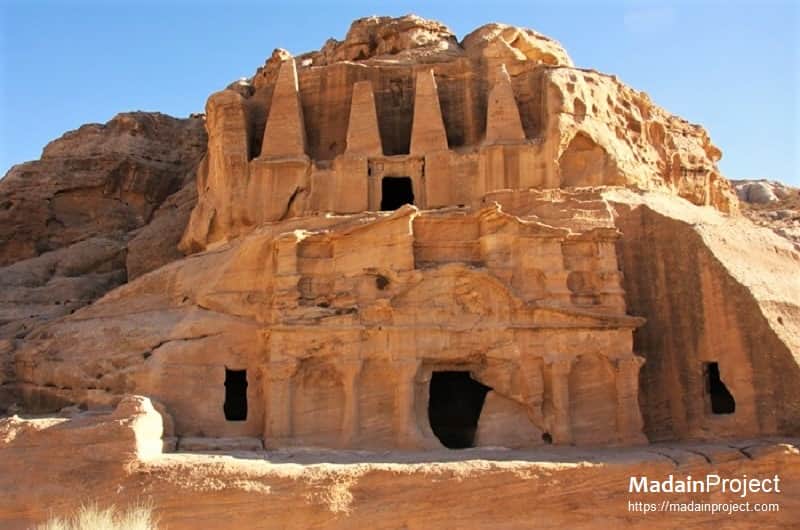 Lower Facade
The lower part of the tomb facade, known as the Bab al-Siq Triclinium. The facade of the lower story includes elements from Greco-Roman architecture as well. In fact, it was built on top of a much earlier structure, with a Doric columned facade.

Triclinium Interior
The bottom story, decorated in a more classical style contains a traditional dining hall for Nabataean funnery rites. In other tombs of the area this feature is substituted with a forerunning dining hall. It is lined by three benches for visitors that included relatives and friends of the deceased, for holding annual banquets in honour of the dead. This part of the building is known as a triclinium (dining room), and is one of several in Petra.

Upper Facade
The five obelisks (inspect), definitely nefesh, together with the eroded human figure in the centre, probably represent the five people buried in the tomb.

Upper Burial Chamber
Two of the five burial niches in the upper level (peek outside) of the tomb. The burial chamber of the Obelisk Tomb is squarish in shape and measures 5.91 m in width by 5.69 m in length, with a ceiling height of 3.95 m (Wadeson Plate 3: B). The floor of the chamber is clear to bedrock and one grave (0.5 m x 1.9 m) has been carved in the north corner, parallel to the left side wall. In each of the side walls are two tall loculi (niches for burial, deeper than they are wide) which are approximately 2.3 m in height (Wadeson Plate 3: C).

Greek Inscription
Ancient inscription in Greek (left) and Nabataean (right) on the wall near the 'Obelisk Tomb' detailing the names of tomb occupants a man named Abdmank and his children. The presence of Greek writing bears testimony to the influence of Hellenistic culture of cosmopolitan Petra. The inscription written by “Abdomanchos”, indicates that the tomb was to be used for himself and his family, probably in the reign of Malichus II (40-70 CE). The inscription is found on a rock opposite the tomb, but it is disputed that if it even belongs to the