The Obelisk of Axum (የአክሱም ሐውልት) is a 4th-century CE, 24-metre-tall (79-feet) phonolite (N1) stele/obelisk, weighing 160 tonnes, in the city of Axum in Ethiopia.

The Obelisk of Aksum (with King Ezana's Stele in the background)—properly termed a "stele" or, in the local Afro-Asiatic languages, hawelt/hawelti (as it is not topped by a pyramid) — is found along with many other stelae in the city of Axum in modern-day Ethiopia. The stelae were probably carved and erected during the 4th century CE by subjects of the Kingdom of Aksum, an ancient Ethiopian civilization. 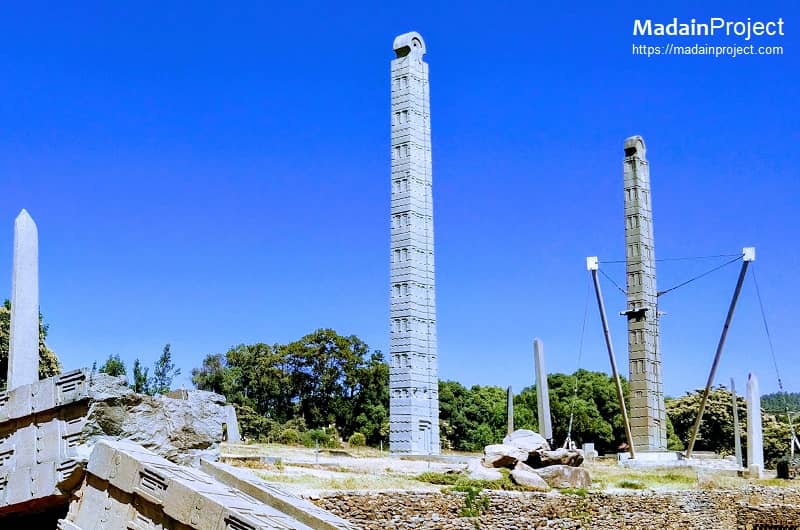 Damage in Antiquity
The stele lost its stability, collapsed and broke up into five huge blocks either during the fourth century or tenth century CE following an earthquake, laying on the ground in Axum. The pieces of the stele where shipped through Massawa in Eritrea, then unloaded in the harbor of Napoli transported by truck to Rome and eventually re-erected in Rome. 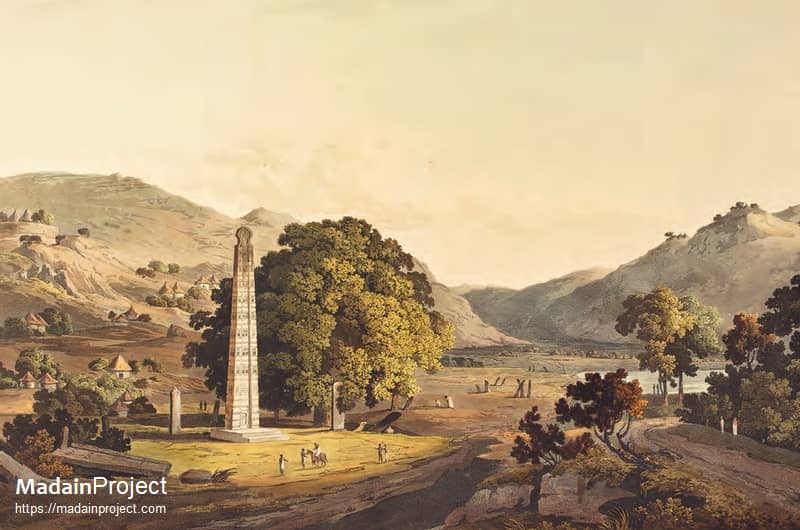 Nineteenth Century CE
In the 19th century, of the three major "royal" stelae, only King Ezana's Stele remained erect, shown in the painting "Sight of Axum" of Henry Salt (1780–1827 CE). Over the course of time, many of these stelae fell to the ground due to: structural collapse (as, probably, in the case of the Great Stele, measuring 33 meters), possibly immediately after their erection; earthquakes (Axum is in a seismic zone); or the military incursions.

Move to Rome
At the end of 1935 CE, following the Italian occupation, Italian soldiers found the Obelisk of Axum was collapsed and broken. In 1937 CE, it was taken as war booty and moved to Italy by the Fascist regime, which wanted to commemorate the occupation of Ethiopia and the birth of the ephemeral "new Roman Empire" (see Italian Empire).

Lower Parts
It is ornamented with two false doors (close-up) at the base and features decorations resembling windows (close-up) on all sides. Erection of stelae in Axum was a very old practice (today it is still possible to see primitive roughly carved stelae near more elaborated "obelisks"), probably borrowed from the Kushitic kingdom of Meroe. Their function is supposed to be that of "markers" for underground burial chambers.

Upper Parts
The obelisk ends in a semi-circular top part, which used to be enclosed by metal frames. The largest of the grave markers were for royal burial chambers and were decorated with multi-story false windows and false doors, while lesser nobility would have smaller, less decorated ones. The last stele erected in Axum was probably the so-called King Ezana's Stele, in the 4th century CE.

The Northern Stelae Field contains more than 120 stelae made of smooth, grey stone. The stelae are each made of a single piece of granite and stand as high as 82 feet. Dating from around 300-500 CE, most the Axum stelae seem to predate the arrival of Christianity to Ethiopia. The stelae were most likely funeral monuments for Axum's ancient rulers, who may have been buried in tombs beneath them. Some have altars at the base with grooves cut into them to carry away blood from sacrifices.