The Naqsh-e Jahan Square (میدان نقش جهان‎, Maidān-e Naghsh-e Jahān), literally meaning the "Image of the World Square" also known as the Imam Square (میدان امام), and Shah Square (میدان شاه) prior to 1979, is a square situated at the center of Isfahan, Iran.

Constructed between 1598 and 1629 CE, it is now an important historical site, and one of UNESCO's World Heritage Sites. The square is surrounded by buildings from the Safavid era. The Shah Mosque is situated on the south side of this square. On the west side is the Ali Qapu Palace. Sheikh Lotf Allah Mosque is situated on the eastern side of this square and at the northern side Qeysarie Gate opens into the Isfahan Grand Bazaar. Today, Namaaz-e Jom'eh (the Muslim Friday prayer) is held in the Shah Mosque.

The Royal Square was also admired by Europeans who visited Isfahan during Shah Abbas' reign. Pietro Della Valle conceded that it outshone the Piazza Navona in his native Rome. 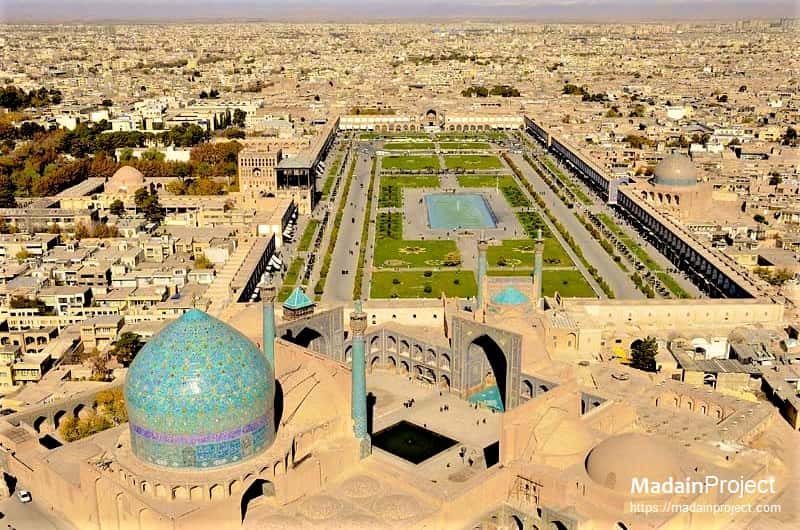 The Maidan was where the Shah and the people met. Built as a two-story row of shops, flanked by impressive architecture, and eventually leading up to the northern end, where the Imperial Bazaar was situated, the square was a busy arena of entertainment and business, exchanged between people from all corners of the world. As Isfahan was a vital stop along the Silk Road, goods from all the civilized countries of the world, spanning from Portugal in the West, to the Middle Kingdom in the East, found its ways to the hands of gifted merchants, who knew how to make the best profits out of them.

The Royal Square was also admired by Europeans who visited Isfahan during Shah Abbas' reign. Pietro Della Valle conceded that it outshone the Piazza Navona in his native Rome.

Ali Qapu Palace
The Ali Qapu is located on the west side of Isfahan’s main square, the Maydan-i Shah, also known as Naqsh-i Jahan (“Half the World”) and now called Maydan-i Imam. It is situated directly across the square from the Mosque of Shaykh Lutfallah. The building is at heart a monumental gatehouse, originally conceived as a two-story atrium communicating between the public maydan and semi-private dawlat-khanah or royal precinct consisting of an assemblage of palaces, storehouses and government bureaus located to the west of the square. However, it grew to accommodate other courtly functions, including administration and entertainment.

Qeysarie Gate
The Qeysarie Gate (سردر قیصریه) is a historical gate built as the main entrance of the Bazaar of Isfahan and Qeysarie Bazaar in Isfahan, Iran. The gate had had originally 3 floors, but the third floor was destroyed later. The destroyed third floor had been a Naqqarekhane. The gate was built in the 17th century during the Safavid era.

Shaikh Lotfollah Masjid
The Lotfollah Masjid was built by the prominent architect Sheikh Bahai in the early 17th century CE (from 1603 to 1619) under the order of Shah Abbas the Great- the 5th Safavid king. The mosque is located on the eastern side of Naqsh-e Jahan Square, just opposite the Ali Qapu Palace, Isfahan, Iran. Its northern side opens into the Isfahan Grand Bazaar. Shaykh Lutfallah Mosque is one of the most magnificent attractions of Esfahan. It enjoys such a unique architecture and decoration.

Shah Masjid
The Shah Mosque, also known as Imam Mosque or New Abbasi Masjid sits majestically on the southern side of Naqsh-e Jahan Square in Isfahan. The construction of this mosque started in 1611 and it was completed during the reign of Shah Safi in 1630 CE.