This page attempts to enlist all the mosques in the Temple Mount (Haram al-Sharif) precint.

North-east exposure of al-Aqsa Mosque on the Temple Mount, in the Old City of Jerusalem. Considered to be the third holiest site in Islam after Mecca and Medina. The small studs to the left are remains of Corinthian Columns. The lead dome of the mosque is also partially visible. Renovations, repairs and additions were undertaken in the later centuries by the Ayyubids, Mamluks, Ottomans, the Supreme Muslim Council, and Jordan.

al-Buraq Mosque, located at the western flank of the Temple Mount (Haram al-Sharif) beside the Morocco Gate. This small structure, on the south-west corner of the al-Aqsa compound is believed to be the place where prophet Muhammad tied the Buraq

The facade of the Masjid al-Qibli, although believed to be situated on the site marked by the second caliph, it may not be an exact location. The axis of the mosque is uncertain, and traditional location of the current structure dates back to the thirteenth century. The central axis of the main al-Aqsa mosque has shifted several times during the centuries. 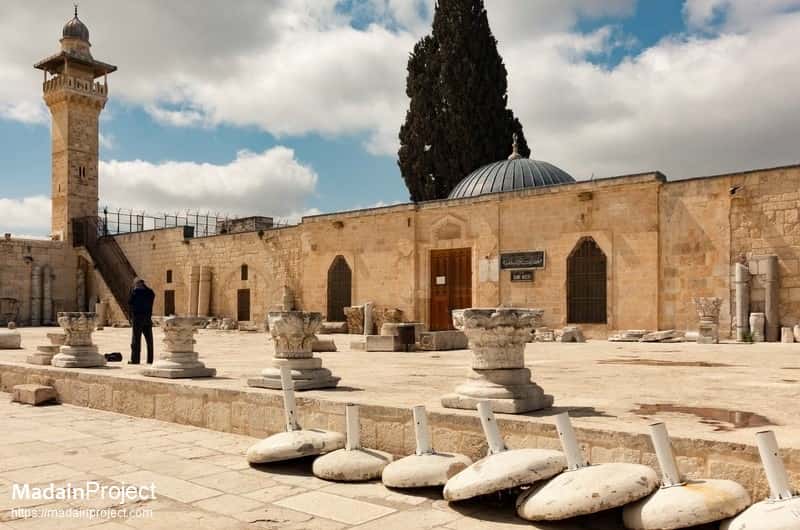 Magharba Mosque was situated inside the Moroccans' Gate at Haram al-Sharif, it has been converted into a Islamic Museum in the recent years and no longer functions as a mosque. Now it houses exhibits from different Muslim eras.

Entrance to the basement of al-Aqsa, now most commonly known al-Aqsa al-Qadeem (المسجد الاقصى القديم), was originally an underground arched access tunnel. This tunnel lead the pilgrims from the western Hulda Gates in the southern wall, up to the Temple Mount Platform.

The Masjid al-Marwani, also known as the Eastern Basement of Haram al-Sharif, is a massive subterranean hall located in the south-eastern corner of the al Aqsa mosque. It extends over four and a half acres of land and can cater for approximately 6000 worshippers at once. The structure of the masjid has been called Solomon's Stables since Crusader times as a historical composite. This mosque was inagurated in 1996 CE.