The Ayyubid Mosque of Omar (Arabic: مسجد عمر بن الخطاب‎, Hebrew: מסגד עומר‎) in Jerusalem is located opposite the southern courtyard of the Church of the Holy Sepulchre in the Muristan area of the Christian Quarter. In 637 CE, the Patriarch Sophronius refused to surrender Jerusalem to Muslim forces except to the Caliph Omar himself. Omar travelled to Jerusalem and accepted the surrender. He then visited the Church of the Holy Sepulchre where Sophronius invited him to pray inside the Church, but Omar declined so as not to set a precedent and thereby endanger the Church's status as a Christian site. Instead he prayed outside in the courtyard, in a place where prophet Dawud (David) was believed to have prayed.

The Mosque of Omar was built in its current shape by the Ayyubid Sultan al-Afdal ibn Salah ad-Din in 1193 in memory of this event. The building exterior is not visible from any of the streets, only the entrance and minaret is visable.

The Ayyubid mosque has a 15 metres (49 ft) high minaret that was built sometime before 1465 during the Mamluk period, maybe after the 1458 earthquake, and was renovated by Ottoman sultan Abdulmecid I (1839–1860). The al-Khanqah al-Salahiyya Mosque, located on the other (northern) side of the Church of the Holy Sepulchre, has an almost identical minaret, erected in 1418 CE. The two minarets were obviously designed as a pair, and it is interesting to notice that a line connecting the two minarets would intersect the door of the Tomb of Jesus. 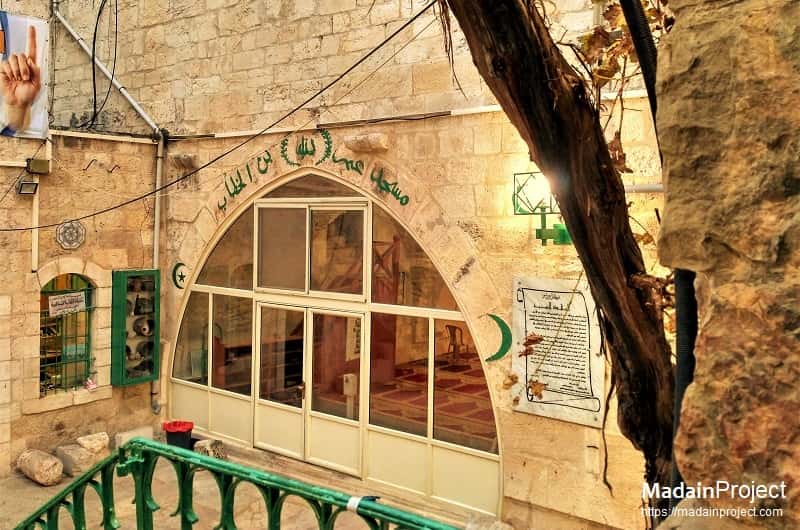 The current Mosque of Omar was built in its current shape by the Ayyubid Sultan al-Afdal ibn Salah ad-Din in 1193 to commemorate the prayer of the caliph Omar. The current mosque is located at a different site than the one where Omar is believed to have prayed and where the earlier mosque was located, since it stands to the south of the church rather than to the east of it. Today the actual compound of the mosque is some 6-7 feet below the street level, from the entrance one needs to descend some 7/8 step staircase to reach the ground level.