The Mosque–Cathedral of Córdoba (Mezquita-Catedral de Córdoba) is a former Moorish Mosque, originally constructed circa 800 CE. Today, officially known by its ecclesiastical name, the Cathedral of Our Lady of the Assumption (Catedral de Nuestra Señora de la Asunción), it is affiliated with the Roman Catholic Diocese of Córdoba. Due to its status as a former Islamic mosque, it is also known as the Great Mosque of Córdoba (Mezquita de Córdoba), or simply as the Mezquita.

The Great Mosque was constructed on the orders of Abd ar-Rahman I in 785 CE, when Córdoba was the capital of the Muslim-controlled region of al-Andalus. The mosque was converted to a cathedral in 1236 CE when Córdoba was captured by the Christian forces of Castile during the Reconquista.

The mosque structure is regarded as an important monument in the history of Islamic architecture and is considered by many scholars to have been highly influential on the subsequent "Moorish" architecture of the western Mediterranean regions of the Muslim world.

Door of San Esteban
The Puerta de San Esteban, formerly known as the Bab al-Wuzara (باب الوزراء) in Arabic, is one of the oldest well-preserved and historically significant gateways of Moorish architecture. It was originally the gate by which the Muslim emir and his officials entered the mosque and it presumably existed since the mosque's first construction by Abd ar-Rahman I in the 8th century. However, its decoration was completed by Muhammad I in 855 CE. Centuries of slow deterioration and restoration attempts have erased some elements of its decoration, but major original aspects of it remain. Its historical-architectural significance derives from being the earliest surviving example to display the classic ornamental features of Moorish gateways: a door topped by a horseshoe arch with voussoirs of alternating color, which in turn is framed by a rectangular alfiz.

Door of the Palms
The Door of the Palms (Puerta de las Palmas) is the grand ceremonial gate from the Courtyard of the Oranges to the modern cathedral's interior, built on what was originally a uniform façade of open arches leading to the former mosque's prayer hall. Originally called the Arco de Bendiciones (Arch of the Blessings), it was the setting for the ceremonial blessing of the royal flag, a ritual which was part of a Spanish monarch's coronation ceremony. Its current form dates from the restoration and remodelling done by Hernán Ruiz I in 1533, who created a plateresque façade above the doorway. The facade's statues depict the Annunciation while, unusually, the smaller figures in the lower corners depict mythological creatures.

Courtyard of the Orange Trees
The courtyard is known today as the Patio de los Naranjos or "Courtyard of the Orange Trees". Until the 11th century, the mosque courtyard (also known as a sahn) was unpaved earth with citrus and palm trees irrigated at first by rainwater cisterns and later by aqueduct. Excavation indicates the trees were planted in a pattern, with surface irrigation channels. The stone channels visible today are not original. As in most mosque courtyards, it had fountains or water basins to help Muslims perform ritual ablutions before prayer. 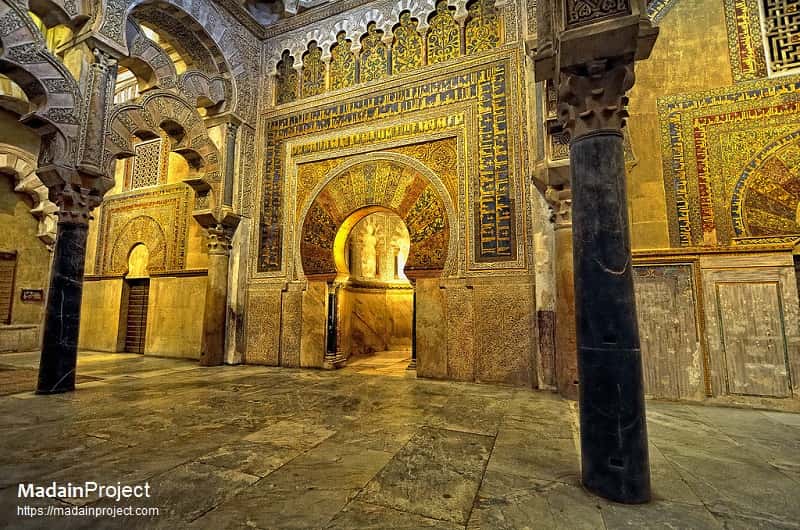 Mihrab of al-Hakim II
al-Hakam II added a richly-decorated new mihrab and maqsura section (finished in 971 CE). The chambers on either side of the mehrab are decorated with exquisite Byzantine mosaics of gold as well. This was the third mehrab to be installed in the Mosque.

Hypostyle Prayer Hall
The mosque's hypostyle hall dates from the original construction, expanded over several eras and served as its main prayer space for Muslims. Rows of double-tiered arches divided the original building into 11 aisles or "naves" running from north to south, later increased to 19 by al-Mansur's expansion. The approximately 850 columns are made of jasper, onyx, marble, granite and porphyry.

Main Chapel
The cathedral's main chapel (Capilla Mayor) is located at the cruciform nave and transept at the center of the building. This cruciform section was begun in 1523 and finished in 1607 CE. The design and decoration of the ensemble includes extensive iconography. The Gothic-style vault over the main altar is carved with images of musical angels, saints, apostles, and an image of Emperor Charles V (Carlos V), with an image of Mary at the center.

Minaret and Bell Tower
Abd al-Rahman III added the mosque's first minaret (tower used by the muezzin for the call to prayer) in the mid-10th century. The minaret has since disappeared after it was partly demolished and encased in the Renaissance bell tower that is visible today, which was designed by Hernán Ruiz III and built between 1593 and 1617.